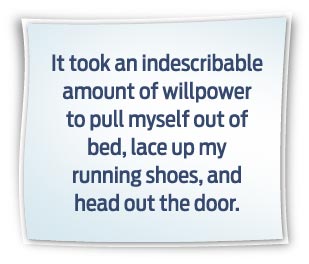 Jimmy PhillipsTherefore I do not run like someone running aimlessly” (1 Cor. 9:26).

I see . . . nothing. Well, nothing new, anyway. The same suburban houses, with the same green grass and oversized SUVs, line the same nondescript streets, which all seem to be named after trees: Oak, Maple, Chestnut, Walnut, whatever. By this point it’s all the same.

I hear . . . the same playlist on my iPod starting over—again. I really have to get some new music.

I feel . . . my feet pounding the pavement, again and again. I’m at mile six, a little more than halfway done. Far enough along that my lungs are beginning to hate me and my feet are beginning to beg for a slower pace. Why am I doing this again?

These are the days I question this whole running thing. I’ve been training for nearly six weeks, but race day is still more than a month away. It’s like mile 176 of a 300-mile road trip: the excitement that accompanies the beginning has worn off, but the destination is nowhere in sight.

Right now—like the middle of Wyoming—everything looks, sounds, and feels the same.

I’m beginning to question if the end will ever come.

Running has a beginning, an end, and an everything-in-between. It’s not like basketball or football, in which you go up and down a playing surface, encountering your end objective again and again. In the world of running, only one finish line matters.

And getting there is the hardest part.

Weeks before my half marathon I awoke about 9:00 on a cloudy Sunday morning. The day’s objective: run 10 miles before lunch. My legs hurt just thinking about it. I began making excuses in my head. What difference will one run make? I’ve worked hard for almost two months now; I can afford a week off . . .

It took an indescribable amount of willpower to pull myself out of bed, lace up my running shoes, and head out the door. And even once I did, things didn’t get any better. Amid the unchanging scenery and repetitive pounding, I began to feel as if I were running in place.

Why am I doing this again?

It’s taken some time, but I can finally answer that question.

As I discovered in part one of this series (“Running—With Purpose,” July 14, 2011), when you run with purpose it changes your mind-set. What I’ve come to realize even more is that how I run isn’t just a means to an end—it is my end.

In My Utmost for His Highest (July 28), Oswald Chambers illustrates the depth of this truth:

“What is my dream of God’s purpose? His purpose is that I depend on Him and on His power now. If I can stay in the middle of the turmoil calm and unperplexed, that is the end of the purpose of God. God is not working toward a particular finish; His end is the process—that I see Him walking on the waves, no shore in sight, no success, no goal, just the absolute certainty that it is all right because I see Him walking on the sea. It is the process, not the end, which is glorifying to God. . . . His purpose is for this minute, not for something in the future. We have nothing to do with the afterwards of obedience; we get wrong when we think of the afterward. What men call training and preparation, God calls the end.”

But when you’re all by yourself and everything looks, sounds, and feels the same, how will you run then?

Don’t ask “why” now—the end is closer than you think.

____________
Jimmy Phillips ([email protected]) writes from Bakersfield, California, where he is marketing and communication coordinator for San Joaquin Community Hospital. This article was published August 18, 2011.