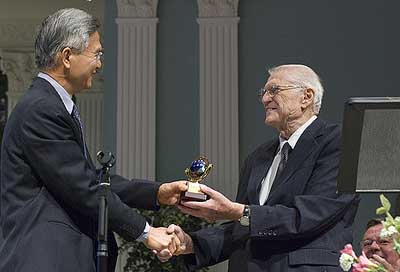 Daniel Andrew (Don) Roth, 84, a veteran Seventh-day Adventist communicator, pastor, and advocate for retired Adventist workers, died at his home in Loma Linda, California, on July 26, 2011, following a brief illness. He lived in the Linda Valley Villa retirement community since December 2010, but had been a Yucaipa, California, resident for the previous 20 years.

Roth had a real love for writing and has contributed to various church and city papers, including the Yucaipa News Mirror since 1991 and the Loma Linda City News. He was a member of the Calimesa Seventh-day Adventist Church from 1991 until his death.

During his career he served as a church administrator, writer, missionary, recruiter of missionaries, and editor of several publications.

Born in Norwood, a Cincinnati, Ohio, suburb, on April 14, 1927, Don (whose official birth name of Daniel was seldom used) was the fifth of the six children born to Daniel and Matilda Roth, both German-speaking young people who emigrated in their late teens from Europe in 1914, just before the beginning of World War I.

Because he worked his way through college, it took Don five years to complete his collegiate work at Washington Missionary College (now Washington Adventist University) in Takoma Park, Maryland. In August 1948 he married Doris Ann Behringer, of Washington, Pennsylvania, a long-time friend and fellow student. They graduated together in June 1950.

Later that year he began denominational work in Philadelphia, Pennsylvania, when he was accepted on a probationary basis as a departmental secretary of the former East Pennsylvania Conference of Seventh-day Adventists. The office subsequently moved to Reading, Pennsylvania. During the time of his service there, two of his three children were born, David Alan and Diane Arlene.

In 1954 he was called to be the Public Relations and Radio-TV secretary of the Columbia Union Conference of Seventh-day Adventists in Takoma Park, Maryland, a unit of the church for the Mid-Atlantic States. He also served as editor of the Columbia Union Visitor, then the church's weekly paper. The birth of Daniel Andrew Roth Jr. in Takoma Park completed the Roth family. Don was ordained as a Seventh-day Adventist minister in 1959.

In early 1965 Don and his wife received an invitation from the world headquarters of the Seventh-day Adventist Church to go into overseas mission service. In late July 1965 the family left for Singapore, where he became the assistant secretary of the Far Eastern Division of the church, which at that time covered 17 nations of Asia. He also carried other responsibilities during this period, including a major role in evacuating many national employees of the Saigon Adventist Hospital during the fall of South Vietnam to the Communists in April 1975.

At the church's 1975 General Conference Session held in Vienna, Austria, Roth was elected as an associate secretary of the church's General Conference, located in Takoma Park and later in Silver Spring, Maryland. In his new post he became responsible for recruiting missionaries for the church's Far Eastern and Southern Asia territories. He continued in this post until September 1990, when he retired from full-time service and moved to Yucaipa, California.

He worked part time from 1991 to 2011 as a Representative of the General Conference Secretariat on the campus of Loma Linda University. In this role, he maintained contact with retired Adventist workers in the region, and often supplied information on their lives and careers to church media, including Adventist Review magazine and Adventist News Network, when those retirees passed away.

Don authored four books and hundreds of articles that have appeared in many church publications. During his career, honors were given to him by his alma mater (at that time Columbia Union College) as Alumnus of the Year; the Vietnam Mission for his role in the 1975 evacuations from Saigon; and the Southeastern California Conference of Seventh-day Adventists for outstanding public relations leadership, as well as the local Calimesa Seventh-day Adventist church for his untiring service.

In October 2009 he received a Lifetime Achievement Award at the annual meeting of the Society of Adventist Communicators. A year earlier he was given an award from the Alumni Association, School of Medicine, Loma Linda University, for his many years of association with the organization as editor of one of their publications and for his ongoing affiliation with them on alumni projects and the recruitment of physicians for overseas mission service.

In May 2011, Roth received an award from General Conference Secretary Pastor G.T. Ng for Roth’s lifetime of denominational service. The presentation followed morning worship at the church's world headquarters in Silver Spring, on May 3, and several family members were able to attend.

Earlier in his ministry, Roth served on a wide variety of boards including the Public Relations Society of America and the New York Board of the Christian Medical College of Vellore, India.

Because he visited 120 countries of the world, he belonged to the Travelers Century Club. He also served on the boards of the Quiet Hour Ministries, an international broadcasting group in Redlands, California, and the Emerald Foundation, headquartered in Loma Linda, California. The latter organization is active in raising funds for Christian work in Ireland.