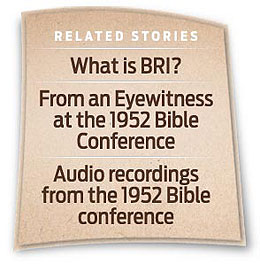 BY MICHAEL W. CAMPBELL
At least once in a generation,” noted Francis D. Nichol, editor of the Review and Herald in 1952, thought leaders had an opportunity to “refresh” their “spirits” and quicken their fervor “by concentrating for a time on the divinely connected pattern of truth that God has given to us.”1 The 1952 Bible Conference was a carefully crafted event held September 1-13, 1952, in the Sligo Seventh-day Adventist Church in Takoma Park, Maryland. The records show that 498 individuals participated in some of the 82 presentations that would play a role in the development of Seventh-day Adventist theology.

Together these church leaders called for renewed emphasis upon Adventist evangelism, to reexamine traditional doctrinal positions “to make sure that they are setting forth the truth in a way that most fully explains the meaning of the times,” and to seek to further the Adventist stance upon searching for “enlarged light.”2

Impetus for Another Bible Conference
The 1952 Bible Conference was much larger than the previous Bible Conference held in 1919, and was more structured and regulated. A planning committee of 23 members carefully screened the papers.3 Participants were able to submit their written questions, which were then screened, and presenters responded during formal 15-minute question-and-answer periods.4
The goal of church leaders was to double the membership of the worldwide denomination from 1950 to 1953. The papers presented were to affirm the Adventist stance that the Bible was the foundation for Adventist beliefs. On the opening night then-General Conference president W. H. Branson challenged the church to become the “most powerful exponents of Bible truth who ever lived.”5 At the same time the planning committee believed that this meeting gave an opportunity to refute attacks made by Bible critics. Such study would take “these very missiles that are so confidently hurled at them . . . [and] even more confidently hurled back at the Bible critic.” As a result, major attention was given to recent archaeological discoveries as “evidence for Bible inspiration.” Study was also given to the relation “of science to Adventist faith.”6
The recent global conflict (World War II) that had concluded only seven years earlier was also the stimulus for students of Bible prophecy to reexamine their interpretative stances. Like the previous 1919 Bible Conference, which focused on the interpretation of inspired writings (hermeneutics), and more specifically eschatology, these debates would play a prominent role throughout the meeting. The presentations were hailed by church leaders, including Branson and Review editor F. D. Nichol, as “one of the most important meetings in our history.”7
Why the 1952 Bible Conference Matters
In the study of the development of Adventist theology, the 1952 Bible Conference is often easily glossed over. The conference, however, did make a significant theological impact in two specific areas.
First, the presentations by W. E. Read on the great controversy signaled a shift in how to interpret the final battle of Armageddon. Rather than a literal battle between actual nations (as had sometimes been taught),8 Read argued that this final battle was not a physical battle between earthly nations but a spiritual battle between the forces of good and evil. This position by Read has remained the normative stance that the denomination has continued to adhere to.9

Second, Edward Heppenstall, then a young professor at La Sierra College in California, gave a series of presentations on the relationship of the law and the gospel. Since Ellen White’s death the Adventist theological pendulum had swung toward a dispensationalist view of the covenants (the old covenant belonged to the Old Testament). In contrast, Heppenstall argued that both the old and new covenants were a part of an everlasting covenant. Heppenstall furthermore represented a shift in the theological leadership of the church regarding end-time theology, particularly that espoused by M. L. Andreasen, a prominent Adventist theologian who had taught at the Seventh-day Adventist Theological Seminary and had served as president or academic dean at several Adventist colleges. Although Andreasen was not present at the 1952 Bible Conference, his views were represented by others. In contrast, Heppenstall personified a new generation of Adventist theologians who were now at the theological helm directing where the denomination would go.10
Tangible Results
Perhaps the most lasting result of the 1952 Bible Conference was the creation of a “Committee for Biblical Study and Research” ratified at the Autumn Council “to encourage, organize, and coordinate this biblical exegesis and research and then to function as a body of counsel to give guidance to those who in any part of the world field make what appears to them to be significant discoveries of truth.” Although the Biblical Research Fellowship had been started in the 1940s, this new committee gave official sanction to the work that these scholars were doing. The committee would be chaired by W. E. Read (until 1956) and would continue to evolve into the present Biblical Research Institute (BRI), which still operates at the General Conference and where scholars continue to probe biblical and historical matters11 (see sidebar).
The 1952 Bible Conference further showcased that new biblical and archaeological research affirmed traditional Adventist beliefs. The presentations paved the way for new scholarly projects such as the Seventh-day Adventist Bible Commentary, as well as the volume Problems in Bible Translation (published in 1954).
The 1952 Bible Conference highlighted the influential role that Adventist theologians and church historians play within the denomination. By producing theologically sound resources, it demonstrated how careful scholarship can strengthen confidence in the Advent message.
_______________
Francis D. Nichol, “The Bible Conference,” Review and Herald, Aug. 28, 1952, pp. 1, 13.
Our Firm Foundation: A Report of the Seventh-day Adventist Bible Conference Held September 1-13, 1952, in the Sligo Seventh-day Adventist Church, Takoma Park, Maryland (Washington, D.C.: Review and Herald, 1953), vol. 1, pp. 16, 17.
This committee consisted of W. H. Branson, L. K. Dickson, E. D. Dick, H. L. Rudy, A. V. Olson, R. R. Figuhr, W. B. Ochs, R. A. Anderson, C. L. Torrey, D. E. Rebok, L. E. Froom, W. A. Spicer, Glenn Calkins, E. E. Cossentine, J. E. Weaver, M. V. Campbell, L. L. Moffitt, T. H. Jemison, W. E. Read, F. D. Nichol, M. L. Rice, F. H. Yost, and C. L. Bauer.
D. A. Delafield, “Bible Conference Closes on Revival Note,” Review and Herald, Oct. 2, 1952, p. 7.
5 Frederick Lee, “Historic Bible Conference Convenes,” Review and Herald, Sept. 25, 1952, p. 1.
6Wikipedia, http:en.wikipedia.org/wiki/1952?_Bible_Conference.
7Delafield, p. 1.
8Gary Land, “The Perils of Prophecying: Seventh-day Adventists Interpret World War One,” Adventist Heritage 1 (1974): 28-33, 55, 56.
9W. E. Read, “The Great Controversy Between Christ and Satan,” in Our Firm Foundation, vol. 2, pp. 239-335.
10 Edward Heppenstall, “The Covenants and the Law,” in Our Firm Foundation, vol. 1, pp. 435-492.
11 “Autumn Council Actions,” Review and Herald, Oct. 23, 1952, p. 19.