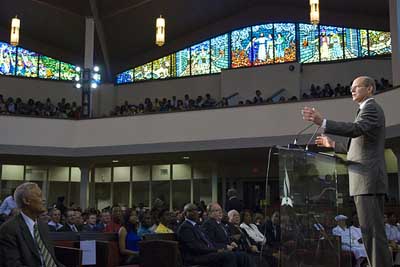 ‘Our only hope at history’s close,’ General Conference president says.

The message came during Sabbath morning worship April 9, at the start of the Adventist world church's spring leadership meetings. Those sessions are being held at the Oakwood campus this year, instead of its usual location at the church's Silver Spring, Maryland, headquarters.

"Christ's all-encompassing righteousness is our only hope as we rapidly come to the close of earth's history," Wilson said to an onsite congregation of approximately 2,100 as well as a live global television and Internet audience. "Seventh-day Adventists have been called to proclaim the truth as it is in Jesus. He and He alone is our salvation," he added.

Wilson said Christ "calls us to accept His righteousness and to be empowered by the Holy Spirit to accomplish the last great work of proclaiming Christ, His righteousness, and His soon coming. This is the message that has been entrusted to the Seventh-day Adventist Church as His last-day remnant people."

He added, "At this critical moment in earth's history, with the world collapsing around us, let us humble ourselves before the Lord realizing that our only hope is in Christ and His righteousness."

Wilson quoted Ellen G. White, a pioneering co-founder of the Seventh-day Adventist movement and the founding influence behind the establishment of what is now Oakwood University, who wrote, "A revival of true godliness among us is the greatest and most urgent of all our needs. To seek this should be our first work." (Selected Messages, Book 1, page 121)

Referring to the Church's current theme, Wilson said, "This call for revival and reformation is not some legalistic, 'pull-yourself-up-by-your-bootstraps' kind of religion. It is centered in Christ and Him alone."

He added, "The voices of Seventh-day Adventists should be the foremost in proclaiming that salvation is through Christ and Christ alone! The two great provisions of salvation -- justification and sanctification -- cannot be separated for they constitute the fullness of Christ's all-encompassing righteousness."

The message followed a service that highlighted the musical talents of many Oakwood University students and staff, particularly its orchestra and the Aeolians, the school's renowned choral group. Following a scripture reading in English and Koine Greek, the latter by a student, the Aeolians presented a praise number, "It Pays to Serve Jesus," which brought many in the congregation to their feet praising God at its conclusion.

"We've already had the sermon," Wilson said as he took to the podium following the rousing musical appeal, offering affirmation to the University and its constituency: "Here at Oakwood University, you are a vital part of God's worldwide family."

That "worldwide family" was also a key target of Wilson's message, with the leader telling his hearers the conversion process "is only something that God can produce."

Again quoting Ellen White, this time from her book Steps to Christ, Wilson read, "Each morning consecrate yourself to God for that day. Surrender all your plans to Him, to be carried out or given up as His providence shall indicate. Thus day by day you may be giving your life into the hands of God, and thus your life will be molded more and more after the life of Christ." (Steps to Christ, page 70)

The church leader cautioned his hearers against any sense of spiritual superiority apart from God's grace: "Let no one in the Seventh-day Adventist Church think of themselves as better than anyone else. Let no one accuse others of not being holy or perfect. We are all sinners at the foot of the cross in need of a Savior who provides for us His all-encompassing righteousness in justification and sanctification. We owe everything to Jesus and our relationship with Him."

He added, "The character of Christ is perfectly reproduced in our lives when we lean completely on Christ alone. It is not in ourselves to accomplish this."

Asking how Adventists are to understand the plan of salvation, Wilson supplied several possibilities.

"Cheap grace will not do it. It denies the power of the Holy Spirit to change the life day by day to become more and more like Christ," he said. "Legalism will not do it. It blocks the only way to salvation -- total dependence on Jesus Christ, our only way to salvation. An intellectual, higher critical approach will not. It destroys the very miracle of conversion and sanctification and strips God's salvation of its power to change lives."

The answer, Wilson declared, "is [that] only Christ's all-encompassing righteousness of justification and sanctification ... will save you, change you, and nurture you into a true disciple of Christ. It is something that Jesus does both for you and in you."