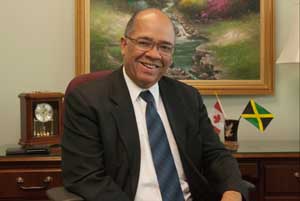 Parchment, Man of Laughs, Helps Adventist President With Details
Assistant to president: “I’m like a filter”; e-mail from a prophet

It’s not rare to hear Orville Parchment’s laugh echoing over the cubicles.  Even though many think the assistant to the world church president is one of the jolliest employees in the building, Parchment can transition to serious when the job demands it, as anyone who has watched a stoic Parchment helm a crisis-management committee could tell you.

He delivers sermons in Asia, welcomes ambassadors at the denomination’s headquarters, and speaks to groups about the president’s emphasis on revival and reformation.

Usually, though, Parchment is plowing through e-mails in his office, which overlooks Highway 29 in Montgomery County, Maryland. As the assistant to Ted N. C. Wilson, president of the Adventist world church, Parchment acts as an extension of the president’s office, speaking on behalf of Wilson and fielding requests as varied by subject as they are by locale.

“I’m here to lighten his [Wilson’s] load so he can look at the bigger picture and cast a vision for the church. When he’s in town, he has very little time,” Parchment said one recent morning in his office.

Wilson will be in the office fewer than 30 business days from January 1 through the end of September, said Marilyn Perez, Wilson’s scheduler and executive administrative assistant.

Parchment, 63, originally from Jamaica, served as president of the church in Canada and the U.S. state of Arizona before then-president Jan Paulsen asked him to serve as his assistant in 2003. He said Paulsen valued his “grassroots” experience leading conferences and a union, two of the local mid-level administrative units comprising the denomination’s structure.

Wilson requested that Parchment continue his service following the administration changeover last summer, Parchment said. He continues to serve as chair of International Crisis Management Committee, which monitors major international crises and advises local church administrations on the safety of missionaries. Most of the committee’s actions go unreported because of safety issues for employees in some world regions.

“We rarely have problems, but remember: we’re staffed by Christians, not angels,” he said.

Around the office he handles requests from the undersecretary regarding meeting agendas, assists the nine vice presidents with the president’s requests, and fields questions from employees and members worldwide, some of them revealing frustrations.

A local church pastor has just been fired and is appealing the decision to the president of the denomination. “We have to tell them this is a local issue, and we refer it back to local administration,” Parchment said.

The requests can often pour in.

A person in North America wanted to fly in and talk with the president about a “confidential” matter. No deal, Parchment said.

Two people in Asia wanted Wilson to come and encourage people to read their Bibles every day. More information needed, Parchment told them. Independent pastors and groups regularly request a video greeting from Wilson. Get aligned with the church, Parchment tells them, and then we’ll see.

Six months ago a person claiming to be a prophet wanted to share something with Wilson. Another person wanted to tell Wilson some reoccurring dreams they had.

“I say to myself, If I were living in [church cofounder] Ellen White’s day and she wrote a letter like that to me, would I respond to her?” Parchment said. “It does cross my mind. I hope I’m not putting off God by politely turning these people down.”

Though he handles most requests of the president himself—“I’m like a filter in many ways,” he said—Wilson handles some directly.

One country, with church structure organized by a union, wanted to turn each of their five conferences into a union. Parchment met with them for two hours explaining the position of world church leaders.

“Finally Elder Wilson wrote a letter . . . and put everything to rest,” Parchment said with a wink.

When traveling, Parchment said he seldom engages in question-and-answer sessions or offers his own opinion during speaking engagements. Often he discusses voted initiatives of the world church and the president’s emphasis on revival and reformation.

His explanation of the initiative: “It’s two things, making sure we are living the life we ought to live and being involved in mission. It’s not going out to convert people—that’s the work of the Holy Spirit—but to share the love of God with all the people we come in contact with.”