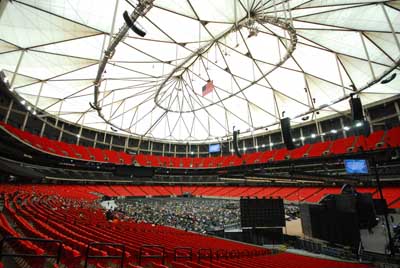 A downsized GC session might be in the church’s future

Planning for the event typically begins 10 years out, meaning the location for the 2015 session was announced in 2006 after a host city selection process, including a search for venues, proposal reviews, bidding cities, and site visits.

Adventist Church administration won’t vote on the location for the 2020 General Conference session until October, but some at world church headquarters are discussing whether a downsized session is on the church’s horizon.

As Adventist Church membership has grown, so have session venues. Today, a potential host city must boast a covered stadium able to seat the estimated 70,000 who attend peak weekend meetings, said Sheri Clemmer, associate meeting planner for the world church. The site must also offer adjacent convention centers and nearby accommodations for upward of 6,000 delegates and session support staff, she said.

Session traffic typically wanes on weekdays. Daily business meetings—where key decisions are actually made—are often sparsely attended, except by session delegates and a few faithful spectators. Instead, guests often crowd the exhibitor’s hall or participate in the many activities held alongside session.

Others have asked whether a downsized session might open cities outside of the United States to hosting duties. Of the 59 sessions since the Adventist Church was established in 1863, only three were held elsewhere, said Mwansa, who serves as a world church general vice president.

The format of the church’s largest business meeting can be reexamined only during a vote taken at the session itself. While no such proposal exists, church administrators have “talked informally” about what shape future sessions might take, said Lowell Cooper, also a world church general vice president.

“As the church grows, the potential for [the session] to become an even more complex and costly event increases, forcing us to consider what it is we need to achieve at session, and what is optional,” Cooper said.

Whether that discussion will lead to more sessions being held outside North America is debatable, church leaders said.

“Some delegates—and that includes me; I was a union president that year—were traveling for at least two and a half hours every day one way to get from our hotel to the convention center,” said Mwansa. “We had to start off as early as 5:30 a.m.”

An early morning might not seem insurmountable, but factor in jet lag, Mwansa said, and delegates tasked with making some of the church’s arguably toughest and most pivotal decisions can become exhausted.

“The key factor is how best to facilitate the business of the church,” he said, suggesting that a rested body and clear mind might help.

Also central in determining where the session is held is its budget. Getting audiovisual equipment, support staff, and delegates to the location is expensive, said Verland Erntson, controller for the world church’s Accounting Department.

In 1995 the world church spent $5.8 million footing the bill for the session in Utrecht, not including airfare for support staff. Five years later, the session in Toronto, Canada, cost more than $1 million less. Even last year’s session venue in Atlanta, Georgia—which totaled $5.5 million—cost less than Utrecht. “That surprises me,” Erntson said.

Downsizing the session just to accommodate overseas host cities is an idea with “little traction” so far, Cooper said.

In 2005 then-world church president Jan Paulsen asked regional church presidents to choose a venue other than world church headquarters to host Annual Council, one of the church’s biannual business meetings. “Even for that smaller meeting, most of them preferred to come here—they were used to it, and it was convenient,” Mwansa said.

While holding session outside North America might serve as a symbolic recognition of church growth elsewhere, recent spikes in membership are already acknowledged in practice, Mwansa said.

The church’s representative system “shifts in a powerful way the decisions and the future of the church by virtue of the fact that those delegates exercise their regional mind-sets,” he said.

Regardless of where the session is held, the global scope of the event is not lost, nor are the voices of membership worldwide drowned out, church leaders agree. Delegate selection criteria for the session gives no advantage to the region hosting the event, Cooper said.

The local pride that comes with hosting a session is, at least for now, reserved for residents of San Antonio, Texas. Their city will host the church’s next session in 2015. And, for 2025?