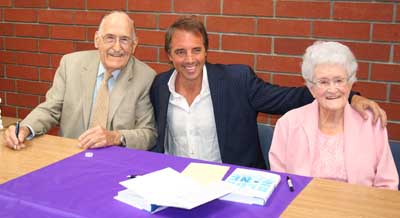 In recent years Jetton drew widespread attention after being featured in writer Dan Buettner’s 2005 National Geographic article and subsequent book, which focused on “blue zones,” areas of the world in which people live longer and have a high sense of well-being. Loma Linda—and, specifically, the already closely studied Adventist community there—was one of the four zones.
The spotlight on Jetton led to several national television appearances, including the Oprah Winfrey Show in 2008, which featured her workout routine: pedaling several miles daily on a stationary bike and lifting five-pound weights.

Buettner described Jetton as “the poster girl” for the Adventist lifestyle, embodying its best practices, such as having a strong sense of community, volunteerism, and keeping the Sabbath.

“She was an emblem,” Buettner said. “You could tell her story, and it kind of reflected what people should be doing to reach her age. She represented the promise of good living.”
Jetton also was one of several dozen centenarians participating in the Adventist Health Study, an ongoing research project at Loma Linda University that is funded by the National Institutes of Health and examines why Adventists tend to live an average of 10 years longer than other Americans.
Dr. Gary Fraser, who is coleading the study, recalled that the years had done nothing to dull Jetton’s sharp mind. “She was so quick-witted and funny,” he said. “She was very impressive.”
Ora Marge Hodge was born to a muleskinner and ranch cook in Yuba City, California. She attended Sutter Union High School, where she was a member of the debate team, according to a biography by granddaughter Shawn Casey-White. She graduated in 1921.
While a nursing student at St. Helena Sanitarium and Hospital in California’s Napa Valley, she met a bellhop who would later become her husband, James Aston Jetton. The couple married in 1926, after a three-year, chaperoned courtship. Jetton then worked as a nurse in Walla Walla, Washington, and later in San Francisco, Los Angeles, and Santa Rosa, while her husband was in medical school.
They spent their nearly 77 years of marriage opening and running the first clinic in the small community of Fallbrook, California, offering their services to the Army during World War II; establishing Woodruff Community Hospital in the Long Beach area; and serving as medical relief missionaries in Zambia and Ethiopia.
Jetton’s active lifestyle continued into retirement, Casey-White said: She worked at the Loma Linda University Medical Center library and volunteered for the Voice of Prophecy, an Adventist radio broadcast.
Jetton was preceded in death by her husband in 2003. She is survived by two children, seven grandchildren, and 10 great-grandchildren.
Advertisement
Advertisement