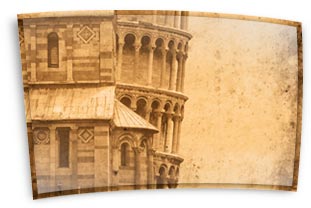 Italy, located at the heart of the Roman Empire, has for many centuries been the political center of Western civilization. It is cradle to an inexhaustible and veritable plethora of lively and beautiful cities, art, and tourist attractions, ranging from prehistory to modern times. You can spend a lifetime in Italy and still not exhaust its valuable treasures. One of the most famous attractions a person should try to see when visiting Italy is the Leaning Tower of Pisa.
The Leaning Tower
The tower is truly a magnificent work of art and indeed a unique sight. The appearance alone of this structure seems to defy the laws of physics. It is actually the freestanding circular bell tower of the nearby cathedral, together with the baptistry and cemetery located on a grass square known as the Field of Miracles. The tower is built of white marble and stands 183 feet (56 meters) high.The top of the tower is off the vertical by about 12 feet (3.9 meters). Work on the foundation of the tower began on August 9, 1173. The actual construction work was carried out in three stages over a period of 177 years. Although the tower was intended to stand vertically, it began to sink and tilt five years into the project. This brought the work to a halt. But the building costs had already been so high that the thought of demolishing the project and starting afresh was never seriously considered. Work on the tower resumed in 1272. The seventh floor was done in 1319. Finally, the tower was completed in 1350. A bell chamber was later added in 1372.
Many futile attempts have been carried out over the centuries to rectify the problem of the tower. However, it was only recently with the expert advice of Professor John Burland, a specialist in soil mechanics from the London Imperial College of Science, Technology, and Medicine, that a viable solution was found. After decades of corrective reconstruction and millions of dollars spent, the tower has been finally declared stable for at least another 300 years.
Lessons From Pisa
It was cold, rainy, and windy, when I climbed the 294-step spiral staircase to this legendary belfry in 2007. Since I stood on the tower steeple overlooking the city, I often thought about the leaning tower in relation to God's true end-time church. Here are some of my reflections.1

1. Like the Leaning Tower of Pisa, the church was established by Christ to endure the battering winds and storms of life. Satan, the old serpent and great deceiver, is not a human foe. He is ruler and prince of the powers of darkness (Eph. 6:12). So those whom God has called to be members of the body of Christ (1 Cor. 12:26, 27; Eph. 4:11-13) will be singled out by Satan as his prime target. The devil aims not only to distract us from salvation, but also to bring about our utter ruin. He will threaten to destroy the church by winds of opposition, persecution, heresies, dissention, and disintegration, for he knows his time is running out (Rev. 12:12, 17).

2. The Leaning Tower of Pisa has been attributed to soil perk erosion, faulty infrastructure, and a poor foundation. This is not all true about the church of God. Human beings who make up the body of Christ, the church, often bring disrepute to God and the church. Internal rivalry, bickering, deceit, lack of concern for truth and justice, hypocrisy, slander, etc., hinder stability, unity, and the success of God’s work today. But the church remains the property of the living God. It does have a sure foundation, Jesus Christ (Matt. 16:18; Eph. 2:20). So while the church may at times appear to be feeble and “about to fall, . . . it does not fall. It remains, while the sinners in Zion will be sifted out.”2 The church, as the chosen people of God, is shielded, cared for, and guarded by God as the apple of His eye (Deut. 32:10; Zech. 2:8).
3. In the early twentieth century an attempt was made to rectify the problems of the Leaning Tower. The foundation of the tower was drilled into and a cement grouting mixture was injected into the holes. But the process, which tampered with the foundations of the tower, almost proved its undoing. Herein lies an invaluable lesson for the church today: we must not tamper with nor step off the sure foundation upon which Christ Himself has established His true church, nor should we enter any new organization, for to do so is apostasy from the truth.3 The fundamental truths upon which the remnant church are built are deeply rooted in the Word of God, and thus will endure the test of time until Jesus returns.
4. From the Leaning Tower of Pisa we also learn the need for regular assessment. Parents, teachers, pastors, and leaders need to recognize the value of identifying issues that may adversely impact the life of the home, school, and church. We cannot ignore evidence if things are not going as planned. Take time out to evaluate the progress of the church, its programs, doctrinal understanding, policies, methods of evangelism, and others, and modify our strategies to meet our short- and long-term goals. God’s vision for the work of His church must be reflected in our policies, budgeting, and operation. Leaders should earnestly seek divine guidance in doing the work of the church and must not rely on the broken reed of human wisdom.
5. In 1990 the Leaning Tower of Pisa leaned so badly it was considered unsafe and consequently was closed to the public. Giant bands were used in 1993 to anchor the tower. Engineers then placed about 2 million pounds of lead on the higher side of the tower as counterweight. And beneath the foundation of the higher side of the tower, they removed about 50 cubic yards of dirt. This helped to straighten the tower by about 18 inches (45 centimeters), stabilize the foundation, and prevent irreparable damage to the tower without taking away the uniqueness of its structure. The lesson here may not be easy for the church. Sometimes a subtraction process may be more valuable than an addition process. Quality and not quantity is crucial. The church must employ dedicated and qualified workers and ensure that new converts are thoroughly grounded in God’s Word.
6. The different methods adopted by engineers as they worked on the Leaning Tower of Pisa are also significant learning tips. They teach us not to be satisfied with the status quo. As leaders and pastors and teachers we must think creatively when finding solutions to the intricate challenges faced by the church today. The church is the “light of the world” (Matt. 5:14), and as such, it has a spiritual, ethical, and moral obligation to its members, employees, and society at large. The church must remain spiritually relevant in an ever-changing world, render welfare to the needy, and defend the plight of the helpless (Isa. 1:17; cf. Isa. 61:1, 2). Our internal and societal experience must promote fairness, equity, and justice (Micah 6:8). Because to do otherwise is to bring disgrace to God, the author of mercy and justice (Ps. 89:14).
At the End
The Leaning Tower of Pisa has undoubtedly baffled scores of architects, engineers, builders, and people like me for centuries—and yet it still stands today. It is a fitting symbol of God’s church today. As a people we are recipients of God’s marvelous grace and mercy. Salvation is neither the result of anything good in ourselves nor the result of any good thing we can boast about (Eph. 2:7, 8). Salvation is the free gift of God’s grace.
Like the Leaning Tower of Pisa, the church, in many ways, is far from being perfect. It has its own problems and weaknesses. Nevertheless, in spite of its flaws, the church is still beautiful. Failure to recognize this fundamental truth has led some Adventist Christians astray. The quest for perfection rather than progress often leads to disillusionment and apostasy. But the faithful members of the body of Christ, the church, will get dressed and get ready for the wedding of the Lamb—a continuous process that does not end until probation closes (Rev. 19:7; 21:2).
_________
1 Some of the ideas in this article have been inspired by Nickolove Lovemore, “7 Business Success Strategies From the Leaning Tower of Pisa.” You can find it at http://ezinearticles.com/?7-Business-Success-Strategies-?From-the-Leaning-Tower-of-Pisa&id=1644053.
2 Ellen G. White, Selected Messages (Washington, D.C.: Review and Herald Pub. Assn., 1958), book 2, p. 380.
3Ibid., p. 390.
_______________
Hailing originally from Papua New Guinea, Limoni Manu O’Uiha, Ph.D., is currently serving as the associate pastor of the Palmerston North and Masterton Churches in New Zealand. This article was published March 17, 2011.
Advertisement
Advertisement