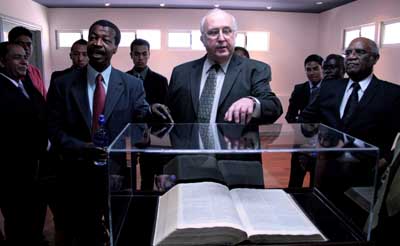 In Costa Rica students, professors, and the general public will have access to copies of the writings of Ellen G. White, a pioneering cofounder of the Seventh-day Adventist Church, at the specially designed, 6,017-square-foot (559-square-meter) center. The facility boasts a library of 745 books in English and 246 in Spanish, in addition to manuscripts and letters written by Ellen White.
The center features the only replica in the world of Mrs. White’s writing room. It also houses two large classrooms, one that will hold 41 students and the other 36, providing seating for future doctoral and master’s-level degree students in theology. There is also an office, a small museum, reception area, and waiting room.

James Nix, director of the Ellen G. White Estate, based in Silver Spring, Maryland, was a guest speaker at the inaugural event. He spoke of Mrs. White’s experiences and motivated those in attendance to learn more of her life with the valuable information contained in the new center.

Leon B. Wellington, vice president and coordinator of the Spirit of Prophecy research centers of the church in Inter-America, spoke of the new center as one of the best facilities in Inter-America and the world.
“This center is for the Adventist community and for those who decide to learn more of our church history,” Wellington said.
As the ribbon-cutting ceremony took place, Nix asked those gathering to invite people to the center.
Herminia Perla, president of Central American Adventist University, thanked the Inter-American Division and the four union offices in Central America for their support in establishing the new facility.
“We praise God for all of His blessings for this institution and for the support for the building, the center of which will serve as an instrument for the development of faculty, students, and the community,” Perla said.
The Ellen G. White Estate is the official organization created by Ellen G. White to act as custodian of her writings. Based at the General Conference of Seventh-day Adventists in Silver Spring, Maryland, United States, with which it works closely, the White Estate oversees research centers at Adventist universities and colleges around the world.
To learn more about The Ellen G. White Estate and its research centers,  click here.  To learn more about the Central American Adventist University and its programs, click here.
Advertisement
Advertisement