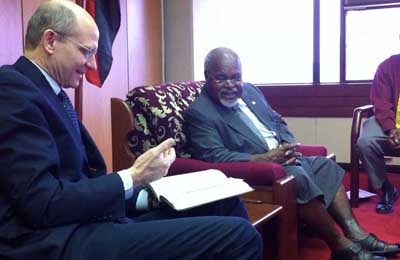 BY DAVID GIBBONS, reporting from Port Moresby, with Adventist News Network staff
A
t the request of Sir Michael Somare, Papua New Guinea’s prime minister, the Seventh-day Adventist World Church president led a Bible study and prayed with the national leader.
Somare, a Christian, told Pastor Ted ?N. C. Wilson that Adventists in his country model good citizenship, and applauded the trustworthiness of those he employs. Fifteen Adventists sit in the country’s parliament, eight of whom are members of Somare’s cabinet.
The meeting was part of Wilson’s 16-day journey across the South Pacific, with stops in New Zealand, Australia, Fiji, and Papua New Guinea.

Halfway through his tour the Ad-?ventist Church president is reiterating a message he’s honed since his election last summer—the church’s future depends on members embracing their identity.

Adventists “must be unique” in order to impact their communities, Wilson said during several stops in the region.
In a message that echoed his recent speech at the 2010 Annual Council, Wilson told hundreds of members in an Auckland, New Zealand, church to be Christians first, but also to safeguard what makes them distinctively Adventist.
Without that uniqueness, the core of the church—its belief in Jesus’ soon return and commitment to the biblical commandments—is diluted, Wilson said, citing the church of Laodicea. Described in the Bible as neither hot nor cold, Laodicea is used as a metaphor to describe “lukewarm” Christians who have lost their fervor for Christ.
Rekindling that enthusiasm “is not something that committees . . . can plan or legislate,” Wilson said. “We need a revival that can come only from an outpouring of [God’s] Spirit.”
Since his keynote address following his appointment as world church president at the General Conference world session last summer, Wilson has called for deliberate spiritual renewal among church members and leaders.
In Port Moresby, Wilson spoke to an audience of more than 100,000, reminding them to “focus on Jesus,” not “distracting” issues that spur division among members. “[God’s] Spirit never brings confusion,” Wilson said.
Wilson also asked church members to redouble their prayers for Jesus’ soon return, joining Adventists worldwide in prayer at 7:00 a.m. and 7:00 p.m. for an outpouring of God’s Spirit.
“We have the word ‘Adventist’ in our name, yet we are still here,” Wilson said, noting that church cofounder Ellen G. White wrote that Jesus could have returned many years ago “and many times since,” had the church been ready. “We need to humbly plead for revival and reformation in our lives,” he said.
Advertisement
Advertisement

News
Brazilian Businessman Invites More than 100 Friends to a Bible Study
Martinho Moura sends a daily devotional to colleagues, who resend them to others. Commentary
A Day on the Road with Ted Wilson
Five sermons and a road scare do not tire Adventist Church leader.
Commentary
When Ted Wilson Preached to an Empty Field in the Philippines
What looked like a curse turned out to be a blessing.