05 CN: Bibles Given to AU Students 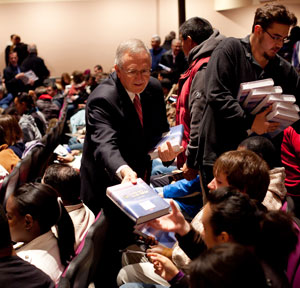 BY ASHLEIGH JARDINE, Office of Integrated Marketing and Communication, Andrews University
B
ack-to-school days in January 2011 included something extra for an estimated 3,500 students at Andrews University, an educational institution of the General Conference of Seventh-day Adventists. Each student was given their own copy of the Andrews Study Bible, which features the New King James Version of the Scriptures and notes prepared by a group of Adventst scholars and experts (see Adventist Review, June 17, 2010; online at http://bit.ly/hdykQR).
Thanks to generous donations given by board members, E. Edward and Ann Zinke of the Foundation for Adventist Education, as well as Andrews’ faculty and staff, along with a host of others, the free-Bible project took wing. Distributions took place in January, just in time to get the Word of God into the hands of every student prior to the various weeks of spiritual emphasis held annually.

“It tells a lot about a person where they put their money. It’s really nice to know the university cares that much about us to give out of their own pockets,” said Kali Jardine, a biology major. “The study Bible will be a tool I can use to refresh my devotional life and give me a new perspective on what I read. I’m excited for this opportunity and the blessings it will bring.”

Before the beginning of fall semester, Andrews’ faculty and staff donated funds to the Bibles for Freshmen project. It provided an Andrews Study Bible for each incoming freshman. That project took on a new life at the October 2010 board of trustees meeting. Engineering student Sandra Prieto opened the board meeting with a word of prayer. Sandra, who had previously donated toward the Bibles for Freshmen project by sponsoring a Bible for an incoming Andrews freshman, then shared the impact the Andrews Study Bible gift had on her. That launched the board of trustees into a conversation about how they could also support the project. In a matter of minutes the board collectively pledged $18,000 of their personal funds to expand the Bibles for Freshmen project to provide Bibles for all current students. Those gifts, combined with funds from the Foundation for Adventist Education and other donations, totaled nearly $64,000.
Graduate students received their Andrews Study Bibles at the first distribution event on January 13 in the Howard Performing Arts Center. Students were asked to sit with classmates from their respective schools/colleges while deans, department chairs, and faculty distributed the books.
During the graduate convocation service, university president Niels-Erik Andreasen spoke with Edwin Hernandez, an Andrews alumni and a trustee who supported the Andrews Study Bible distribution project. Hernandez recalled the October board meeting and said the decision to sponsor Bibles for all Andrews students was “Spirit-led.”
“We wanted to ensure all students had access to this extraordinary resource,” Hernandez said.
“These study Bibles will help students grow not only spiritually but also scholastically,” said graduate student Elkyn Beltre. “It was very generous and thoughtful of the board members to give this gift to us.” Beltre is just one of many students who plan to use the gift for both personal devotions and academic study.
The distribution event for undergraduates came one week later. Following chapel at Pioneer Memorial church on January 20, Ron Whitehead, assistant to the president for spiritual life, shared with students the story behind this gift.
“Most Christian universities give Bibles to students when they reach graduation,” he explained, “but 20 percent to 30 percent of students who start as freshmen won’t make it to graduation! So we thought, Why not give one to them at the beginning?”
A host of Office of Campus Ministries leaders and faculty/staff from across campus helped pass out the Bibles. Bookmarks highlighting a list of Sabbath school and small group Bible studies were also distributed.
Advertisement
Advertisement