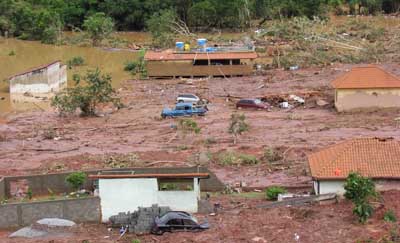 Most affected is the hillside region north of Rio de Janeiro, where rising water and ensuing landslides uprooted homes and claimed some 700 lives in recent weeks. Parts of the region experienced 10 inches of rain in less than 24 hours.
Adventists in the region are distributing food and personal hygiene products to assist an estimated 100,000 people left homeless during the flooding. To support their efforts, regional church leader Montano de Barros visited the affected area.

Adventist media in Brazil contributed to the relief effort by raising awareness of the disaster. Those watching Adventist Media Center programming heard broadcasts about how they could help flood victims through the Adventist Development and Relief Agency (ADRA) in Rio de Janeiro. An Adventist radio station in Teresópolis—among the most affected towns in the region—encouraged listeners to offer their financial support and donate blood to help victims.

In a statement, Erton Köhler, South American Division president, thanked church members for their “solidarity and prayers” during the situation, and applauded the swift mobility of the church’s relief effort.
The nearby Petropolis Adventist Academy did not incur damage during the flood, and no deaths in the Advent-ist community due to flooding have been reported, church leaders said. The school is serving as a hub for church members and volunteers aiding those affected by the flood.
Officials feared the search for missing people would cause the death toll to rise.
Meanwhile in eastern Australia, ADRA is working in partnership with the Queensland government to provide aid in the wake of the region’s worst flooding in decades.
Adventist-run health food company Sanitarium is supplying food for distribution to thousands displaced by the floods, church officials in Australia reported.
In mid-January Adventist administrative offices in Brisbane were evacuated when threatened by floodwaters, church leaders said.
While most residents have been safely evacuated to community centers, “the extent of property damage and personal loss is still unknown,” said Chris Olafson, ADRA Australia’s emergency management director.
“This disaster will require a long-term community response,” Olafson said. n
—Aleksandra Marek, and South Pacific Division Record staff, contributed to this report
Advertisement
Advertisement