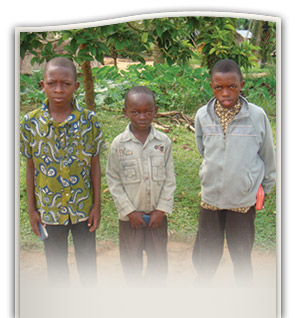 I was holding a two-week series of evangelistic meetings in a place called Oicha in the Democratic Republic of the Congo. During our stay we lived with the pastor in his house. As soon as I stepped into the house, one of his children, a boy named Bwambale Kataka Genick, attracted my attention. He seemed different from the other children.

A group of about 60 other people worked with me, and our routine consisted of going from house to house every morning at 6:30 to give Bible studies to villagers before they went to work in their fields. Genick, about 12 years old, always got up with us, joined us for prayer at 6:00, then went out with us to give Bible studies. At first I thought that while we were visiting, Genick was playing with his friends; and that when we came back about 10:00, he was returning from his play.

A Shining Example
One day Genick told me that he and two friends (both younger than he was) were giving Bible studies to several people, including a professor. I had a hard time believing him.
But as the days passed and we came to the end of our meetings, we all tried to bring the individuals in our study groups to a decision to be baptized. Genick told me that he wanted to take me to one of his groups, to the family of the professor to whom he was giving Bible studies, so that I could answer their questions and help them make a decision for Christ.
Is he serious? I wondered.
But Genick took me and my translator about a kilometer from his house. He led us through many streets, and on the way my translator and I couldn’t help wondering whether the boy knew where he was taking us.
We finally reached the house. The family welcomed us. They knew well the three boys who came every day for Bible studies. Genick started to give the day’s lesson to the family. I was so impressed by his confidence in giving the Bible study that I just watched in amazement as he quoted verse after verse of the lesson.
At the end of the lesson the professor praised this team of boys who came to his house every day for Bible study. “Now I understand why the Adventist Church is growing so fast,” he said. “Even your children have the courage to give Bible studies. It’s something I haven’t seen in other churches.”
A Prophetic Movement
The testimony of that professor touched me, and I felt so proud to be part of this wonderful family of Adventists.
I spoke with the professor about some of the previous lessons presented by the young evangelists. He had some questions about the Sabbath that we tried to answer. We spoke for about two hours.
I also was touched by the courage of these boys. It gave me a new insight into the mission of the church. I appreciated anew God’s promise about the Holy Spirit anointing God’s people in the last days: “I will pour out my Spirit on all people. Your sons and daughters will prophesy, your old men will dream dreams, your young men will see visions. Even on my servants, both men and women, I will pour out my Spirit in those days” (Joel 2:28, 29).
When the meetings came to an end, we, in consultation with the local pastor, made Genick head of children’s ministries for the whole district. I’m sure God has great plans for Genick for His work in the mission field. At the end of the meetings 36 people were baptized.
Even though the professor hadn’t been baptized by the time we left the village, he promised to continue studying God’s Word with his family.
___________
Amir Gulzar teaches Business and Computer Science at the Adventist University of Lukanga in the Democratic Republic of the Congo. An abridged version of this story appeared in KidsView, November 2010. This article was published February17, 2011.
Advertisement
Advertisement