"Not Afraid to Go Alone" BY GORDON E. CHRISTO
Georgia Anna Burrus, an attractive young woman in her early 20s, listened intently as Elder Stephen Haskell described his trip across India. Her heart stirred as he appealed for women missionaries to share the gospel with the women of India who lived in zenanas—enclosed quarters of a dwelling into which no man could enter. She should go to India, Georgia thought, so she volunteered.
Sometime later at the 1893 General Conference session, Georgia and another woman, Myrtle Griffs, were officially invited to go to India and learn the local languages so they could work among the shut-in women.
The two enrolled in the nursing course at the St. Helena Sanitarium in California and joined a course for missionaries going overseas. Then both young women became very ill. Myrtle dropped out of the program, but Georgia opted for surgery. However, though scheduled twice, the operation never took place. Georgia prayed and recovered naturally. She took this as a sign that God approved of her commitment to mission work in India.
Going to London

Not long after, Elder L. C. Chadwick, the foreign mission secretary, instructed Georgia to travel to London with a group of missionaries. There she would join the D. A. Robinson family and together they would sail for India. But after buying her ticket and paying off some debts, Georgia found herself with only 50 cents—not enough to take her trunk to the station.

While she waited in her room wondering what to do, Brother Hall, in whose home she had been staying, rushed in, shocked that she had not left yet. When Georgia explained her problem, he dashed out of the room and returned with $100. Pressing the money into her hand, he said, “May the Lord bless you and make you a blessing in India.” Then he ran out to procure a carriage for her.
In London Georgia discovered that the Robinson family had postponed their travel to India until the following year. She sold magazines for a while in England, but decided she would rather go on ahead alone and start learning the language while waiting. The mission board concurred and paid her fare, but Georgia would have to support herself until the others arrived. She set sail on the S.S. Bengal and reached Calcutta on January 23, 1895.
Not Really Alone
At the Diamond harbor the ship picked up letters to passengers from relatives and friends waiting for them at the pier. Georgia listened to their excited chatter as they opened letters. It would have been nice to have someone waiting to meet her. Then she heard her name. “Miss Burrus, where is Miss Burrus?” Who could know her in this strange land? Taking the letter, she tore it open as the ship steamed swiftly up the river to the city docks.
The letter was from a Captain Masters and his wife, who had accepted the Advent message in New Zealand and decided to share it with the people of India, where the captain had served for a while in his youth. The couple was selling literature in India for only a few months, but during that time they were able to welcome Georgia. They had even booked a room for her, but found the family had already given it to a relative. As the sun began to set, they located another room in a respectable home. It was rather expensive, so Georgia could not dream of staying there for long. Her new friends helped her with her luggage and bade her goodbye. 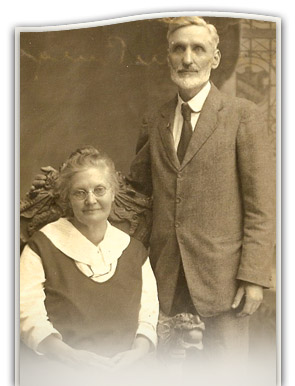 Luther and Georgia Burgess, taken shortly before they left India./

Georgia glanced out the window and observed a group of natives assembling for some strange religious ceremony. The unfamiliar sights and sounds reminded her that she now resided in a very strange land, and a wave of homesickness swept over her. She sat on the bed and pulled out her watch. She had dropped it a few weeks before on the ship, and it had stopped running. Its silence worsened the feeling of homesickness. She prayed earnestly, “Oh, Father, I feel so lonely and homesick; I don’t know what to do. If only I could hear my watch going again I think I would feel better.” Scarcely had she uttered the words when her watch began to tick again. Amazing! It was all right and so was she as she realized that she was not really alone in India.

Led by God
Georgia moved to the Young Women’s Christian Association (YWCA), which proved to be pleasant, comfortable, and reasonably priced. About a month had passed when the matron of the YWCA came up to Georgia, excitedly waving an open letter and asking, “Do you know anyone in Africa by the name Haskell?” The matron went on to explain that some time before Georgia had arrived another missionary named Dr. MacDonald had come with a letter from Elder Haskell asking him to find suitable lodging in Calcutta for Georgia while she learned the language. Accordingly, this missionary had approached the YWCA and arranged for them to take in Georgia. Georgia had never received information of this arrangement, but she now knew that God had guided her feet to the very place that had been selected for her. One of the ladies at the YWCA eventually joined the Adventist Church.
About a month later the superintendent informed Georgia her monthly bill would be reduced by 10 rupees because she didn’t drink the tea or eat the meat dishes. Georgia found that her vegetarian diet opened many other doors for her as well. As she walked down the streets of Calcutta, children begged their parents to invite Georgia into their homes, exclaiming, “She’s just like us; she doesn’t eat meat!”
The reduction in room rent at the YWCA was particularly helpful, as Georgia was spending so much time learning the local language that she had no time to earn income to support herself. After two months she suddenly realized that her money would run out in one more month. She tried to suspend her language lessons, but the teacher insisted on continuing at no charge. Providentially, the very next day Georgia received a check in the mail for 25 British pounds, with a note stating that she would be receiving a similar amount each quarter for the rest of the year. An Adventist in Africa had sold his billiard table for 100 pounds and decided to use it to support the missionary girl in India.
No Longer Alone
Soon Georgia learned that the Robinson family and another missionary, Martha Mae Taylor, would be joining her in Calcutta. Recalling her difficulty in finding a suitable lodging place for herself, she secured a two-story bungalow and furnished it.
One happy Sabbath in November she stood at the pier to welcome the new missionaries. No longer would she be the sole Adventist missionary among the millions in India. More important, she had equipped herself with adequate knowledge of the language to carry forward her mission to the women of Bengal.
Georgia helped open a girls’ school and taught Bible classes by writing out the lessons in Bengali and memorizing them.
In 1903 she married Luther J. Burgess, who had come two years earlier to serve as secretary-treasurer of the India Mission field. He gave up his administrative duties and joined Georgia in pioneering the work among Bengali-, Hindi-, and Urdu-speaking peoples. They ended their mission work in India among the Khasis in the northeast hills. The Burgesses finally returned to California in 1935.
___________
Gordon E. Christo is secretary for the Southern Asia Division, with headquarters in Tamil Nadu, India. This article was published February 10, 2011.