A Mission to Oregon 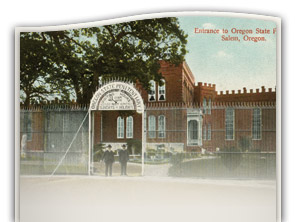 BY PAUL A. GORDON
When Oregon became the thirty-third state on February 14, 1859, it was a far different place than it is today. Inhabited by only a few settlers, those who sought to build any permanent settlement faced many challenges and daily threats.
In the very month that Oregon achieved statehood, Uriah Smith, the 26-year-old editor of The Advent Review and Sabbath Herald, commented on the work of the church in a surprising way. A reader of the Review asked: “Is the third angel’s message . . . to be given [anywhere] except in the United States?” Uriah Smith replied, “This might not perhaps be necessary . . . , since our own land is composed of people from almost every nation” (The Advent Review and Sabbath Herald, Feb. 3, 1859).
This approach to missionary work seems to have been the norm for that time. It had been 15 years since the “Great Disappointment,” and it would be another 15 years before the church would send J. N. Andrews, its first official missionary, along with his two children, Charles, 16, and Mary, 12, to Europe.
The missionary work of the church had received a strong boost from a well-known vision that had come to Ellen White three years before the Andrews family went to Europe, stating that “missionaries are needed to go to other nations to preach the truth” (Testimonies for the Church, vol. 3, p. 204).

HISTORIC SETTING: Interior of the Methodist church in Salem where Ellen White spoke on several occasions and was warmly received.

But there was still another vision that was given to her in 1874—the year the Andrews family went to Europe.

To Oregon?
Church leaders were in California planning for the future work of the church. There was some discussion of going only to the small towns and villages, avoiding the larger cities. In this vision she saw a young man that she had seen before. It was obviously an angel. He said: “You are entertaining too limited ideas of the work for this time. You are trying to plan the work so that you can embrace it in your arms. You must take broader views. . . . The message will go in power to all parts of the world, to Oregon, to Europe, to Australia, to the islands of the sea, to all nations . . . and peoples” (Life Sketches, pp. 208, 209).
Herein lies another part of the story. Ellen White herself would serve in mission service in all of the places mentioned, including Oregon. Her visit in 1878 was the first of three trips to the state, where she actively participated in missionary work.
First Visit: June 10 to July 10, 1878

Ellen White traveled to Oregon from California on a steamer passenger ship, the Oregon. It sailed through the Golden Gate before the present bridge existed. She had planned to do some writing while on the ship, but the ocean trip was too rough. She speaks of being on deck watching the waves crash over the boat while praying for protection for herself and those on the ship. She was able to write a few letters, however, including one to her husband, James, and another to a close friend, Lucinda Hall.
The ocean journey continued to be very rough until at last the Oregon turned into the calmer waters of the Columbia River.
Arriving safely into the capital city of Salem, one of Ellen White’s first appointments was at the large Methodist church, whose steeple dominated the young city’s skyline. She had been specially invited to speak in this church and later wrote to her husband, “I have been treated with the greatest courtesy and kindness by denominational ministers and people” (letter 39, 1878). Attendance was unusually high, and Mrs. White felt free to speak on her favorite topic of temperance. After the first meeting, she was invited to speak again at the church, which she did the following week.
First Oregon Camp Meeting
The first Oregon camp meeting was held near Salem, from June 27 to July 2. The large preaching tent was pitched in a grove of tall fir trees. Fresh yellow straw served as a ground covering under the big white tent. On either side were pitched two large dormitory-style tents, for men and women, respectively. Additionally, 24 family tents were pitched in a semicircle. 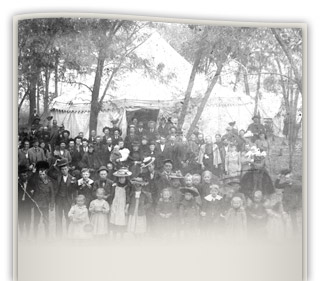 Mrs. White’s first speaking appointment at the camp meeting was on Thursday, June 27, at 6:00 a.m. Reflecting on her experience, she later wrote: “We entered upon the camp meeting with feelings of deepest interest. . . . As I looked upon the intelligent audience, my heart was broken before God. This was the first camp meeting held by our people in the state. I tried to present before the people the gratitude we should feel for the tender compassion and great love of God. His goodness and glory impressed my mind in a remarkable manner” (Life Sketches, pp. 231, 232).

During this camp meeting Ellen White received a number of visions, including one about her husband, James White. This vision is mentioned in Testimonies for the Church, volume 4, page 291.
On Sunday the crowd swelled to 2,000 as people from the surrounding countryside came to hear Ellen White speak about the faith of Seventh-day Adventists. It must be remembered that only a handful of those who were there were members of the church. These were evangelistic camp meetings!
One week later Mrs. White was at Marion Square, a beautiful tree-filled park in Salem, where a crowd gathered to hear her speak on the simplicity of the gospel.

Visiting the Prison
Ellen White was also invited to speak to the prisoners held in the state penitentiary in Salem. Later describing the experience, she wrote, “When the time arrived for service, we were conducted to the chapel, which was made cheerful by an abundance of light and pure, fresh air. At a signal from the bell, two men opened the great iron gates, and the prisoners came flocking in. The doors were securely closed behind them, and for the first time in my life I was immured in prison walls” (Life Sketches, p. 233).
Using 1 John 3:1 as her key text, Ellen White spoke on God’s love and His power to transform lives. In a letter to her husband, James, she explained, “I tried to imagine the youth around me as my boys, and to talk with them from a mother’s heart of love and sympathy, with no thought of lowering the standard to meet them in their sinful, lawless state, but to exalt the law and hold the standard of the cross of Christ high, and then show them the path of virtue and obedience”(letter 32, 1878).
After the service ended, Ellen White was introduced to the prison warden and his wife. Cordially taking Ellen White’s hand, the wife exclaimed, “I would not have lost this opportunity to hear what I have heard for anything. It was all so clear, so simple, and yet so elevating” (ibid.).
Returning to Oregon
Ellen White made two more missionary trips to Oregon—the second one in the spring of 1880, and the third during the summer of 1884. 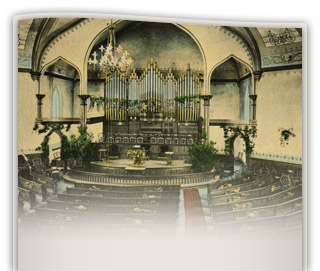 HISTORIC SETTING: Interior of the Methodist church in Salem where Ellen White spoke on several occasions and was warmly received.

During her visit in May 1880, two camp meetings were planned—one held on the eastern side of the Cascade Mountain range in Milton, Oregon; the other on the western side in Salem.

In Milton 40 tents were set up in “Brother Nichols’ Grove” to accommodate campers, and many others stayed in covered wagons. Mrs. White gave 10 presentations, and during the Sunday meetings nearly 1,500 people—many of whom were local townspeople—crowded onto the grove to hear her speak.
Afterward Mrs. White traveled by boat down the Columbia River, to Portland, where she encouraged the small group of Adventists there and in Beaverton.
Arriving in Salem, Ellen White went again to Marion Square, where she had spoken during her first trip to Oregon. This time, the square served as the location for the camp meeting. Many of the local townspeople came to listen to Mrs. White speak during her 12 presentations.
She was again requested to speak at the Methodist church in Salem, where on Sunday evening, more than 700 people listened to her presentation on temperance. Afterward one of the Methodist ministers remarked that he “regretted Mrs. White was not a staunch Methodist, for they would make her a bishop at once; she could do justice to the office” (letter 33a, 1880, to James White).
Final Visit to Oregon
During her final visit to Oregon (from May 30 to July 18, 1884), two series of meetings were once again planned, one near Walla Walla, Washington, and the other in Portland.
During the meetings in Walla Walla, Ellen White had to deal with two young ministers, A. T. Jones and William Raymond, who were critical of the church leadership in Oregon and Washington, as well as at the General Conference. Raymond, especially, was teaching some doctrines not in harmony with the Adventist faith. Jones accepted Ellen White’s counsel, and later made a major contribution to the teaching of righteousness by faith at the 1888 General Conference, but Raymond did not accept her counsel.
Unfortunately, the problems with Raymond continued at the Portland meetings. He met with leaders there who rejected his so-called new light. It was in this setting that Ellen White made a familiar statement:
“There are a thousand temptations in disguise prepared for those who have the light of truth; and the only safety for any of us is in receiving no new doctrine, no new interpretation of the Scriptures, without first submitting it to brethren of experience. Lay it before them in a humble, teachable spirit, with earnest prayer, and if they see no light in it, yield to their judgment; for ‘in the multitude of counselors there is ?safety’ ” (Testimonies for the Church, vol. 5, p. 293). Raymond was the subject of this counsel; he later disappeared from the Adventist ministry.
It was at this important meeting in Portland that Ellen White had her last public vision. Her first public vision had been received across the United States in Portland, Maine, in 1844. Now, 40 years later, her last public vision came to her in Portland, Oregon. Private visions continued through the rest of her life.
_________
Paul A. Gordon (1930-2009) served as director of the Ellen G. White Estate from 1990 to 1995. This article was published January 27, 2011.
Advertisement
Advertisement