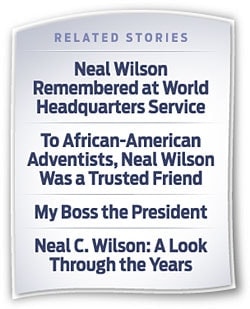 BY MARK A. KELLNER, news editor, with Myrna Tetz,

Author Leadership Lessons From the Life of Neal C. Wilson, Pacific Press, 2011
Pastor Neal C. Wilson, 90, a past president of the General Conference of Seventh-day Adventists, known widely for his administrative skill, jovial spirit, and phenomenal memory of people he had met, died December 14, 2010, in Dayton, Maryland, not far from the church headquarters building he helped construct. He was the son of a Seventh-day Adventist leader and the father of another, Pastor Ted N. C. Wilson, who is the current world president of the denomination, active in 203 countries.
A private interment was held December 17, 2010. Memorial services were held Wednesday, January 19, 2011, at 2:00 p.m. in the auditorium of the church’s world headquarters building in Silver Spring, Maryland.

“The Lord calls people for certain times,” Leo Ranzolin, a former general vice president of the world church, said in a telephone interview. “The church needed a leader of [the] stature” of Neal Wilson to handle the challenges his tenure would encounter, Ranzolin added.
Wilson’s son, Ted, told employees of the General Conference on January 4, 2011, of the personal nature of the loss: “He was not only my father, but also my friend,” the current General Conference president said.
During 24 years in leadership of what is now the church’s North American Division and later the worldwide Seventh-day Adventist Church, Neal Wilson led the denomination through a period of dynamic growth. World church membership doubled from 3 million to 6 million in the 11½ years (1979-1990) of his presidency. (In 2010 baptized membership of the church stood at more than 16 million, and 30 million globally attended weekly Adventist worship services.)
Under Neal Wilson, said George R. Knight, a retired professor of church history at the Seventh-day Adventist Theological Seminary, the movement “truly became a world church.”
As world church president Neal Wilson was involved in the formation of the Adventist Development and Relief Agency, or ADRA. His passion for and dedication to the millions of underprivileged and disenfranchised people around the world led to the creation of ADRA in 1984. ADRA has since grown into a worldwide humanitarian agency with more than 120 country offices and an international staff of more than 6,000 employees. 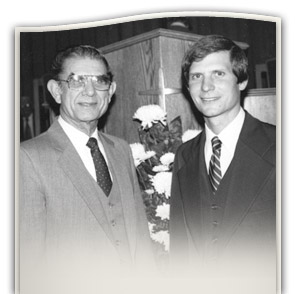 “On behalf of the entire ADRA worldwide family, we extend our heartfelt condolences to the Wilson family during this time of loss,” said Rudi Maier, president of ADRA International. “Elder Wilson has a special place in the heart of all ADRA workers, and his legacy will endure through the millions of lives that are touched by the work that we do.”

Wilson also had a heart for the proclamation of the gospel. Among other initiatives, he was a primary mover behind the establishment of what is today Adventist World Radio (AWR), which reaches out in more than 80 languages worldwide via shortwave radio, terrestrial radio, Internet streams, and podcasts.

He is credited as the chief force behind the drafting and subsequent adoption of a revised statement of the church’s Fundamental Beliefs by delegates to the denomination’s world session in 1980, as well as the relocation of the church’s world headquarters from Takoma Park, Maryland, where it had been for 85 years, to its current location on a main highway in Silver Spring.
Wilson, who had been appointed a “life director” of the Ellen G. White Estate, which is charged with protecting and promoting the work of Adventism’s pioneering cofounder, became a trustee of the organization in 1963 and served in that capacity until his passing. This made him the second-longest serving White Estate trustee, surpassed only by Arthur L. White, a grandson and biographer of Ellen G. White.
Perhaps the greatest evangelistic accomplishment of the Neal Wilson presidency was in creating a stronger presence for the Seventh-day Adventist Church in what is now the former Soviet Union. In 1987, two years before the fall of Communism, Wilson obtained permission to establish an Adventist seminary and church headquarters in Zaoksky, approximately 70 miles southeast of Moscow. In March 1990 permission was granted to start a religious publishing house there. The moves led to two decades of growth in the region: by the end of 2008, membership stood at 137,676, up from 37,388 in 1991. 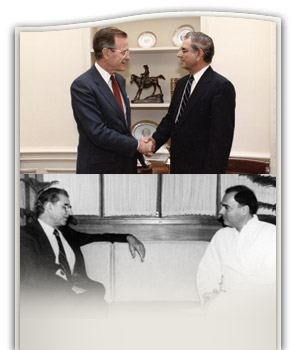 Wilson’s presidency, as Ranzolin noted, was not without its challenges, however. A financial crisis arose in 1980 with the discovery that some church entities (but not the world headquarters) had unwisely invested assets with a developer; another involved the bankruptcy and liquidation of Harris Pine Mills, a church-owned furniture manufacturer providing employment at many church educational institutions. In 1979 Desmond Ford, a professor at an Adventist college in California, gave a public presentation that signaled a major break with the church’s beliefs. Under Wilson’s guidance these situations were handled by committees of church leaders, and the president’s skill in dealing with such matters was widely appreciated.
Said Ranzolin, “I think of him as a man called at the right time [i.e., 1979] for the crises we were about to face.”
Neal Clayton Wilson was born on July 5, 1920, in Lodi, California. His father was Nathaniel Carter Wilson; his mother was Hannah Myrtle (Wallin) Wilson; he had two brothers, Bruce and Donald Wilson; and two sisters, Clarice Woodward and Ruth Murrill. In 1942, after earning a Bachelor of Arts degree at church-owned Pacific Union College, he married Elinor Esther Neumann, who survives. The couple had two children, Ted N. C. Wilson and Shirley Wilson-Anderson, a professor of health at Walla Walla University in College Place, Washington, both of whom also survive, as do four grandchildren and four great-grandchildren.
Neal Wilson’s parents spent their lives ministering for the Seventh-day Adventist Church in Indonesia, North America, Africa, Southern Asia, and the South Pacific. Neal and his four siblings early learned to serve God faithfully as they moved and traveled throughout the world during their childhood and teenage years. The three Wilson ministers, father (Nathaniel), son (Neal), and grandson (Ted), all served on the General Conference Committee, the denomination’s highest decision-making body. Each of the Wilsons also served as officers of the General Conference, and each has been president of a division of the world church—a unique circumstance in Adventist history.
A man of many interests, Neal Wilson particularly savored mountain climbing. One of his dreams for more than 50 years became reality when he and several other church leaders reached the summit of Tanzania’s Mount Kilimanjaro in 1988. At 68 years of age, he was noted as one of the oldest persons to have reached the top. 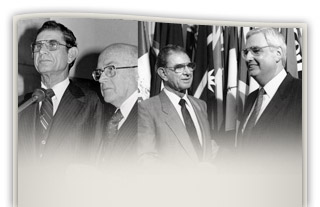 Many Wilson associates valued both his skill in working with people and his concentration on the task at hand. Wilson’s aptitude for remembering the names and pertinent details of the people he met, often surprising those same people in later encounters, was widely known. C. D. Brooks, longtime speaker/director of the Breath of Life telecast, said Wilson had made it a particular point to work on such memorization: “ ‘Everybody likes to be recognized,’ ” Brooks recalled Wilson as saying.
Another pastor, Nikolaus Satelmajer, who recently retired as editor of Ministry magazine, testified to Wilson’s willingness to listen carefully to those who wished to speak to him. “Whenever I had a personal meeting with him, I felt that he was focused on the discussion and that he heard my points and responded honestly to me.”
Wilson left the role of GC president in 1990 and retired following the Indianapolis General Conference session. He remained a consultant to the Euro-Asia Division, however, and was a valued guest at church leadership events, taking to a microphone on the floor to offer comments and guidance based on his experiences.
“I admired him for his leadership,” Ranzolin said of Neal Wilson. “He knew how to handle a committee.” Both of Wilson’s immediate successors, Robert Folkenberg, Sr., and Jan Paulsen, often acknowledged Wilson’s expertise and helpful comments in such settings.
In lieu of flowers, the family said memorial gifts may be sent to ADRA, Adventist Heritage Ministry, Adventist World Radio, or Christian Record Services for the Blind.

Cliff's Edge
His Wounded Hands
How well will we fare when, with “terrible exactness,” every “secret thing” comes under scrutiny before God?
Magazine Article
From Heaven’s Courts
An angel’s story