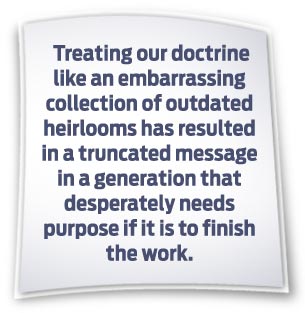 By Andrew W. KerbsWhat does it mean to be a Christian in postmodern America? Ask this question and, depending on whom you ask, you’d likely get many responses. With that question in mind, let me pose it again with a narrowed scope.

What does it mean to be a Seventh-day Adventist in postmodern America? Is there a difference? Should there be a difference? Tuck those thoughts away for a few moments.

You would think that someone who spent 10 or more years in the Adventist education system would be pretty familiar and confident with Seventh-day Adventist beliefs. I’m here to assure you that this isn’t so. In fact, I know of someone (yours truly) who did just that. I even graduated from one of our academies, and what did I really know about the church that I had grown up in? One, we keep the Sabbath (sort of). Two, we don’t believe in competitive sports (but watching them is a different story). Three, we’re (theoretically) vegetarian.

OK, maybe that’s a little embellished, but not much. I knew that Ellen White was an important part of our message, but I didn’t know how. I knew there was something about a heavenly sanctuary that somehow connected to 1844 that somehow connected to our church’s very existence, but that’s where I became lost. I also knew we didn’t think too highly of Catholicism (the institution, at least); and then there was something about beasts.

What did I really know about my own church? To me it was an entangled web of loose ends that I could never understand and didn’t want to. Sadly, I know many young people who feel this way.

Lost Identity, Neglected Heritage
I am only 21 years old as I write this. I am young, but I am acutely aware that I am a part of the next generation (and hopefully the last) of Seventh-day Adventists. With this in mind, it leads me to be concerned. Upon graduating from academy, I didn’t know too much about the heart and soul of Adventism. It took personal study and devotion to get me there, a journey well worth the effort, but a journey not shared with many others of my generation, as I’ve come to find.

And so I state the problem: Though our schools may teach our doctrine, we have lost every ounce of urgency. In other words, a church that touts itself on preaching the three angels’ messages shouldn’t be celebrating its 160th birthday; it should be mourning it! We have lost (or betrayed) our identity and therefore our purpose.

Allow me to use an analogy:
You own a house and you often invite guests over, as reaching out to your neighbors is a favorite pastime. As the years go by, however, you begin to notice that your house isn’t quite like all the others on the block. As the others renovate, remodel, and reassess, your house stays the same. You begin to feel out of place and uncomfortable with your older-style home, which is filled with family heirlooms—and out-of-date. It comes to a point that you’d rather not risk the embarrassment, so you put the heirlooms away when guests are over. You also invite fewer guests. Though the heirlooms are a bit of an eyesore, you don’t wish to get rid of them. After all, they do have sentimental value if nothing else. But you really don’t know all the stories behind them, so even sentiment becomes a poor excuse for their hanging around. Reluctantly you put on a yard sale and sell one or two of them. That wasn’t too hard. You sell a few more. Now you can invite your neighbors over without having to put away those dusty old things. For the sake of appeal, you give up your family’s heritage.

See where this is going? The heirlooms are every unique point of doctrine that made the Adventist founding fathers tick after the disappointment of 1844. Tradition for its own sake should not be kept, but biblical truth and understanding should never be compromised, regardless of what those around us are (or aren’t) doing.

At a Crossroads
Now in relation to the analogy, the youth of Adventism stand at a crossroads where we are cluttered with numerous heirlooms that mean nothing to us.

I remember once talking to a friend and mentioning how certain churches struggle to maintain an active youth department. His reply?

“Well, you know our church keeps holding on to all this old doctrine that isn’t very relevant. If we toned it down and stopped being so judgmental, we’d reach a lot more people.” There was a day when I fully agreed with this; now I agree with only part of it. We are indeed in the danger of becoming irrelevant. Treating our doctrine like an embarrassing collection of outdated heirlooms has resulted in a truncated message in a generation that desperately needs purpose if it is to finish the work.

This is where I can see my generation making the compromise, and it worries me. So long as young people are “coming into the church,” the end justifies the means. If this means having a rock band lead out in worship, so be it. If this means ditching our understanding of Daniel and Revelation, so be it. If it means that political correctness trumps the Spirit of Prophecy, so be it. The end justifies the means—gets young people into the church!

But if these young people start coming simply because the church has diluted its original purpose, then should it even be a church?

Time to Wake Up
During my academy days I had an outside group of Sundaykeeping friends. On Wednesday nights we would go to a large youth gathering at a nondenominational church. A Christian rock band would open up with praise songs, and the room would be packed every time, complete with mosh pit. When they were finished and the youth pastor got up to speak, about one half of the room would filter through the doors and leave. Finally, this “youth ministry” decided to switch things up and put the majority of the rock band’s performance after the pastor’s mini-sermon just to keep people in the room.

This story is my case in point. We can alter everything we want to, but at the end of the day, why are people coming? Is it about Christ-centered worship or religious consumerism? Is the focus on worshipping our Creator, or on what is most appealing to the general public?

I remember a dismayed staff member at my old academy once remarking to me in private, “Why do we bother calling ourselves Adventists anymore? No one here lives or talks as though they’re going to see Jesus any time soon. And you know what? I don’t think they want to.”

And there we have hit the proverbial nail on the head.

What does it mean to be a Seventh-day Adventist in postmodern America? What should it mean?

As I write this there have recently been devastating earthquakes in Haiti and Chile. There have been wars and rumors of wars surrounding Iran, Israel, Somalia, with threats from al-Qaeda. Christ’s warnings are being fulfilled as we speak. Earth’s history is nearing its end and the shadows are deepening with the closing dusk. Yet all the world sleeps soundly. It would be a travesty  for the Adventist Church to do the same.