“We're All One Army”

Adventist Review editor Bill Knott recently sat down with Justin McNeilus, president of Generation of Youth for Christ (GYC), to talk about where the rapidly growing organization fits among other Adventist youth ministries.

Generation of Youth for Christ is now approaching 10 years of ministry to youth and young adults. What’s distinctive about your organization?
First, it’s important to note that everyone who’s working for the Lord and serving His people is building from the same foundation. Sometimes we hear comments that suggest that there’s more than one movement within the Seventh-day Adventist Church—and an implication that the different approaches are somehow competitive. In my opinion, there’s just one movement of God, and that’s a movement of young people who are excitedly proclaiming God’s last-day message to the world. Whether it is under the banner of GYC or a ministry of the denomination, it’s all one movement. We’re all one army. It’s all one message.

But something called GYC forth to address a need that some felt wasn’t being met. What’s the need GYC is intended to meet?
I think it’s a call back to what Ellen White termed “primitive godliness,” meeting the God who raised up the Seventh-day Adventist Church to share His end-time message with the world. There’s nothing remarkable or trendy about GYC or its annual conference: there’s nothing that sets us apart from what dedicated Adventists have always been about. It’s simply about getting back to the fundamental truths of the Seventh-day Adventist Church. It’s a call to Bible study, a call to prayer, a call to let the good news change the way we live and witness.

GYC didn’t grow out of some administrator’s strategic vision, though, did it?
No, you’re right: it didn’t come about that way. It began with a handful of young people, all about the age of 18, talking and praying one evening about a need they sensed for an organization that would challenge them to really live out their faith. In its first phase, it grew up to minister to young Adventists on secular college campuses—to give them a sense of connectedness and purpose as they prepared for their careers. Obviously, the scope has broadened since then, but it’s still built on the same principles. One of the things that has driven GYC from its first days is the fact that the young adults who choose to get involved understand that this organization is led top to bottom by young adults. They have a sense that “Hey, I could be doing this. I could  be doing what Justin and the others are doing. God has given me talents just as He’s given them talents. I could be serving my church in some way.” That’s the flame that keeps us burning.

Organizations, including religious ones, often go through predictable development cycles. Where is GYC in its growth curve just now?
Many ministries develop into institutions, with regularized calendars and annual events. But when you’re participating in a movement, you don’t want to get caught in the status quo—simply repeating what you’ve experienced before. God has a purpose and a place for institutionalized ministries, and I’m not discounting their importance. But GYC is not one of those ministries. We don’t want to become simply another annual camp meeting or convention—a stop on the ministry calendar. We keep praying and looking for the new things God has out ahead of us. 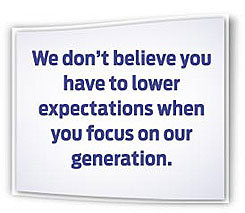 Some other youth ministries have voiced criticism of GYC, claiming that it’s just an outlet for dissident conservatives. What do you say to those critics?
Quite frankly, they don’t know us: they haven’t found the incredibly positive core of what GYC is all about. This movement isn’t “conservative”—it’s Adventist; it’s centered on the Bible; it’s right in the center of God’s will for His remnant church. Interestingly enough, most of those who have critical things to say have never attended a GYC conference or seen for themselves what we’re about. If being passionate about the future of Adventism and the soon coming of Jesus earns critics for GYC, we welcome that!

Your organization seems to begin with the premise that young adults are fully capable of handling strong spiritual content and intellectual challenge.
You’re right: that’s the approach that we’ve taken. Some ministries seem to believe that young adults can’t handle solid spiritual food yet, but we’ve never believed that. We don’t believe you have to lower expectations when you focus on our generation.
We’ve consciously set the benchmark high because we know that our generation is fully capable of “getting it”—wrestling with the most urgent and profound truths human beings can know. We’re challenging each other: this organization is primarily about young adults calling each other to a deeper experience with the Word of God and full participation in His remnant church.

Tell me about the relationship between GYC and church leaders.
We want a strong working relationship with the youth ministries of the Adventist Church. GYC has a lot to offer the ministries of the organized church, and we gain so much by working alongside them. About four years ago GYC found itself at a crossroads: we could either just keep doing our own thing, or we could accept the responsibility to communicate our love for the Lord and this church effectively by engaging proactively with church leaders—sharing with them our mission and objectives. And we did that. The benefit that has come to both GYC and the church has been remarkable. We were officially part of the delegation to the  Atlanta General Conference session; we’ve been invited to serve on key committees, such as the new Revival and Reformation initiative. We’re meeting and interacting with top church leaders in youth ministries and other departments. God clearly led us to take that step. Church leaders genuinely want our input; they want our participation; they ask to hear from us. Young adults are gaining a greater presence in the decision-making of this church—not by pounding on the door and demanding a role, but by proving that we deeply love this message and by rolling up our sleeves.

_______________
LAY LEADER: Justin McNeilus, a businessman in Minnesota, is current president of Generation of Youth for Christ. This article was published in the January 13, 2011 Adventist Review.