Winds of Renewal, Flames of Reformation 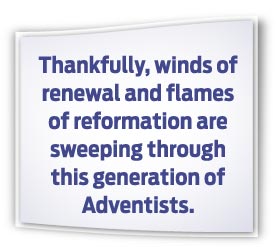 HYVETH WILLIAMSON JANUARY 12, 2007, A YOUNG MUSICIAN DRESSED IN JEANS AND A BASEBALL cap took his place against a wall in L’Enfant Plaza Metro station, Washington, D.C. He opened a violin case, removed his instrument, threw a few dollars into the case as “seed” money, and began to play.

After 43 minutes and five classical pieces, the 1,097 people passing by tossed a mere $52.17 into his case. Of the 1,097 people, only seven paused longer than a minute. And of the seven, only one recognized the world-famous violinist, Joshua Bell, and gave $20 of the meager sum collected.

Three days prior to this appearance, staged by the Washington Post as a cultural experiment, the world-famous musician filled Boston’s Symphony Hall, where good seats went for $100. Two weeks prior to that, this man whose talent commands $1,000 a minute, played to a standing-room-only audience in Maryland.

But that day, when Bell played Bach’s Chaconne on a $3.5 million Stradivarius in the subway station, he barely caught the attention of a few passersby. Why? Because no one expected such majestic and beautiful music in the bowels of an underground station.1

The call of God runs a similar risk of being ignored by many in today’s busy communities of faith. Although Jesus said, “My sheep listen to my voice; I know them, and they follow me” (John 10:27), few seem to expect to really hear Him; or do, above the din of worship dominated by strident, condemnatory voices who lord it over His people despite the contrary testimony of His Word in 1 Peter 5:2, 3. Every day in the midst of our sacred assemblies comes the earnest call of Christ “to place all on the altar of service” (Prophets and Kings, p. 221).

But many believers still testify that they have never heard His voice. Maybe they are too engrossed in having the right form of worship, even as they lack the spirit thereof; that they have the perfect interpretation of doctrines, even if they are deaf to the voice of the One crying in the wilderness of their experience; that they identify and mark off as lost those who disagree with their rendition of righteousness, even though they themselves cannot hear and do not know the voice of the Author and Finisher of our faith.

Thankfully, winds of renewal and flames of reformation are sweeping through this generation of Adventists. Many young adherents embody Os Guinness’ definition of “the call” as “the truth that God calls us to himself so decisively that everything we are, everything we do, and everything we have is invested with a special devotion and dynamism lived out as a response to his summons and service.”2 They seem to take seriously the mission of Christ to seek and save the lost and bring revival to a Laodicean church.

We must encourage them to not just talk or take a stand in rousing meetings where the focus is on our own spiritual deficiencies. It’s time to launch out into the deep of human despair and minister to “the least of these” (Matt. 25:40).

The early church accepted this challenge and grew exponentially as believers served Christ by serving others (Acts 2:42-47). The founders of our movement understood it, and their mission exploded across the world so that our church is now present in more than 200 countries. The work they started is not finished. The call they heard and was motivated by has not been silenced. Opportunities to capture the attention of the world for Jesus are still being extended to this generation despite the follies of our emerging culture.

True, “no one can help everyone, but everyone can help someone,” especially those waiting for a helping hand in blighted neighborhoods just around the corner from our neatly organized and comfortably carpeted churches. Or those Jesus referred to as “the least of these” who are dying in faraway places with names we cannot pronounce but with hearts we can touch and change with the Word of God.

So get revived in Spirit-filled gatherings; then answer His call to go where the needs are great and make a difference for Jesus.


______________
Hyveth Williams is a professor of homiletics at the Seventh-day Adventist Theological Seminary. This article was published on January 13, 2011.