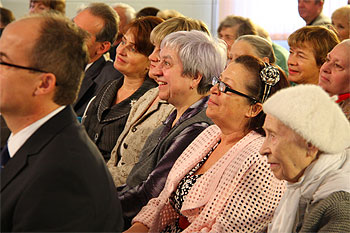 Seventh-day Adventist Church officials in Russia and Eastern Europe are extending an invitation to missing members and, in some cases, publicly asking for their forgiveness. It’s all part of the region’s plan to welcome back inactive members.

Launched in 2008, Return Home is accelerating as church leaders from Ukraine to Siberia seek to find and connect with missing members before a major review of church membership records in 2011.

Whereas routine membership audits have focused on removing members who have died, emigrated, or otherwise transferred membership, this membership review will emphasize so-called missing members, many of whom accepted the Adventist faith following one of the many public evangelism events in the division, but stopped attending shortly afterward.

While public events will continue to play a key outreach role in Euro-Asia, leadership is urging responsible evangelism, in which fledgling members are welcomed into a church family and discipled for ministry.

“Membership audits are not just to check our records, but to evaluate our circle of interest and responsibility,” Guillermo Biaggi, president of the Euro-Asia Division, told delegates gathered on the campus of church-run Bucha College.

Adventist world church secretary G. T. Ng, who attended the meetings, commended the region’s commitment to honest membership records and urged local leaders not to avoid the task because they worry their reputation or representation is at stake.

“There is no losing face in honesty,” Ng said. “Surely we take pride in our work, but our pride should ultimately be based on something more solid than what we have recorded in the books.”

A membership audit can be a reality check for both church leaders and local church members, who realize that their actions or apathy—whether deliberate or not—may have turned new believers away, said Mikhail Kaminskiy, director of the Office of Assessment and Program Evaluation for the Euro-Asia Division.

Changing the climate in the pews, Kaminskiy said, is a top priority of Return Home. Missing members are unlikely to “return home” if they never felt at home in church to begin with. “Be friendly, be open, smile, welcome people. Don’t be hurtful or judgmental,” said Kaminskiy, who also serves as the region’s vice president.

Vladimir Krupskyi, Euro-Asia Division secretary, agrees. “Changes must take place inside the church so it becomes attractive to the community,” he said. “The church must solve its own problems before it can solve the community’s problems.”

Missing members who felt marginalized after baptism will soon find a letter of apology from the region’s former president, Artur Stele, now a General Conference vice president, in their mailboxes. The letter, which asks forgiveness for past hurts or neglect, also includes a personal invitation to give church another chance.

Many of the region’s congregations are also regularly praying for missing members by name, visiting them, and seeking to reconnect and build relationships.

Recently, while her pastor read the names of missing members for special prayer, a lay delegate from Moldova said a former drug addict on the list raised his hand when they read his name. “You can cross me off,” he said. “I’ve come home.”

Regional church leadership will provide resources—including a sample sermon on Christian love, forgiveness, and acceptance—for every pastor who wants to prepare for Return Home, Kaminskiy said. “This should be part of services, worships, and small groups. We don’t want to leave Return Home to run itself.”

Still, some churches aren’t yet involved in the program. Kaminskiy admits that getting an initiative from top administration to take root at the local level remains one of the Adventist Church’s “weak areas.” He hopes emphasizing the program at the region’s major business meetings will help “generate interest,” especially among leaders at the conference administrative level, who have the most contact with local churches.

So does Victor Alekseenko, president of the Adventist Church in Ukraine. “We don’t want to just disfellowship missing members, reconcile the numbers. We want to bring them back,” he said.