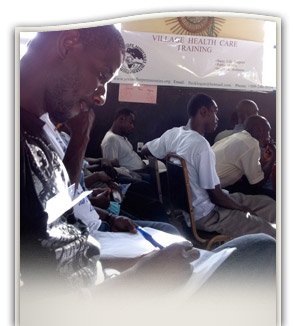 One of the first emergency medical support teams arriving in Haiti after the devastating 7.0 earthquake on January 12, 2010, was a hastily assembled group of volunteers assembled by AMEN and one of its member doctors.

Three days after the catastrophe, AMEN mission coordinator Rick Kerns made an urgent 9:00 a.m. call to Dr. Ron Fleck of Walla Walla, Washington: “Can you have a team of surgeons in Miami on Monday morning [January 18] to ride in a State Department airplane to Port-au-Prince to help with the earthquake disaster?”
By 1:00 p.m. that day Fleck, a preventive health physician practicing in both Pasco and Walla Walla, had lined up six others to join him: two trauma surgeons, an orthopedic surgeon, a general surgeon, a public health expert, and a diesel mechanic to care for broken-down earthmoving equipment hampering emergency work. Coordinating with ACTS World Relief, another quick-moving disaster-response organization in which many Adventists volunteer, the team arrived in Haiti three days later to discover scenes of almost unimaginable destruction. Three hundred thousand people had died in the first quake and associated aftershocks as poorly constructed dwellings and offices collapsed: as many more had been injured, and 1 million left homeless.
Originally intended as a recognizance team to assess the emergency and advise other medical groups to follow, Fleck’s AMEN-coordinated team divided up and soon plunged into caring for hundreds of injured quake survivors. The surgeons performed numerous amputations, addressed terrible wounds inflicted by falling masonry, and battled infection with medications they had brought with them.
Team members worked nearly to the point of exhaustion, Fleck reports, almost overwhelmed by the magnitude of the disaster. Thousands slept in the capital city’s streets to avoid injury in possible aftershocks, and lines of victims formed early every morning for medical care. Food and water were scarce, and some team members lived largely on granola bars and dried fruit donated by Andy’s Market, a College Place grocery store near the campus of Walla Walla University.

That one-week trip was followed by another 10-member Fleck-coordinated team two weeks later that included nurses, social workers with post-traumatic stress disorder (PTSD) training, a teacher, and a dental team. A third trip that included Fleck, another M.D., and three nurses occurred in mid-October, and focused on training 80 young Haitians in basic life support, village health care, and medical evangelism in an upland area some 50 miles north of Port-au-Prince. The region, though not much damaged by the January earthquake, has been overwhelmed by thousands of displaced persons seeking food and water.