Adventist Education Leader Up to the Challenges 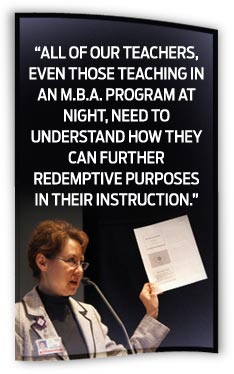 By Mark A. Kellner with Ansel Oliver
Lisa Beardsley has her challenges—at work and at leisure.
When walking in a forest, she said, she can’t merely look at trees and leaves: she has to find something. So her interest is picking up mushrooms—the safe, edible kind—and for her, a summer day’s stroll isn’t complete without finding some.
“It’s been a great year for morels,” those spongy, honeycomb-like ascocarps, Beardsley said.
Whatever success she has in the forest, the General Conference’s new director of Education has plenty to command her attention during business hours and beyond. Nearly 1.7 million students are enrolled in Seventh-day Adventist schools, colleges, and universities around the world, of which number more than half are not Seventh-day Adventists. Tens of thousands of Adventist youth, on the other hand, are enrolled in non-Adventist schools, chiefly because of location issues—there isn’t one nearby—or other challenges.

The question of spiritual formation, student retention, and academic achievement also nip at her heels. Not that Adventist schools are doing poorly on these fronts: multiyear survey data in North America, for example, shows that students in Adventist secondary schools score a grade level higher on achievement tests in every subject than those in other schools. But does the constituency know this; are they aware of the positive impact of Adventist education?
An International Background
Creating awareness of that is one of Beardsley’s challenges, although, as she happily admits, it’s not hers alone. Along with associate Education director Luis Schulz, who had the same position in the 2005-2010 period, Beardsley noted the presence of three new associates: John Wesley Taylor, editor of Dialogue and chair of the Journal of Adventist Education Advisory Board; Mike Lekic, executive secretary of the Adventist Accrediting Association, and Hudson Kibuuka, whom she describes as “our expert in math/?science education and board training.”
“Our team works with 13 world division directors of education,” Beardsley explained to world church leadership during the 2010 Annual Council. These divisional leaders “oversee accreditation of K-12 education in their region, along with many other aspects of the educational work. We work together with them on accreditation of higher education, as well as supporting teachers and administrators. . . . Our GC team was selected on the basis of their capacity to serve a global church. Among them, nine languages are spoken—English, Finnish, French, German, Kiswahili, Luganda, Portuguese, Serbo-Croatian, Spanish—and eight passports are in constant use: Argentina, Canada, Finland, Germany, Switzerland, Uganda, the United Kingdom, and the U.S.A.
Her official biography is succinct, and impressive: “Born in England, Dr. Lisa Beardsley completed two years of theology at Newbold College, England, and graduated with a Bachelor of Theology from the Seventh-day Adventist Theological Seminary, Far East (now the Adventist International Institute of Advanced Studies) in the Philippines. Her graduate degrees include [an] M.P.H. (Loma Linda University), [a] Ph.D. in educational psychology (University of Hawaii at Manoa), and [an] M.B.A. (Claremont Graduate University, California).
“Dr. Beardsley has held faculty positions at the University of Hawaii at Manoa, the University of Illinois, Andrews University, and Loma Linda University. Her administrative experience includes department chair of health education at Toivonlinnanseminaari, Finland; assistant dean for medical education & evaluation, University of Illinois College of Medicine at Peoria; associate vice president for academic affairs, Andrews University; and vice chancellor for academic affairs, Loma Linda University.”
The biography doesn’t mention—although Beardsley happily does—that she is a product of Adventist education precollege: while her father became the first in his family to earn a Ph.D. at the University of Maryland, Lisa went to what is now Takoma Academy in Takoma Park, Maryland, clutching a Webster’s dictionary her father purchased for her at the university’s bookstore. “I loved that [book] and I kept it for years,” she recalls, smiling.
Convinced, at age 8, that she wanted to earn her own doctorate, Beardsley moved on to schools in Finland, Britain, and the Philippines before earning that theology degree. Even if the church didn’t ordain women—as she discovered in 1979, on the eve of her graduation—Beardsley doesn’t regret that course of study.
“There’s no better foundation, no better way to get the big picture and the worldview. I would recommend theology; I know it’s not very practical, but there’s no better foundation for everything else,” she said.
And on that foundation Beardsley has built quite a résumé of accomplishments. The public health, psychology, and M.B.A. degrees were essential for the various aspects of her work and ministry over the years, preparing her for the superintendence of a global educational network. As she noted, theology, education, public health, and business are the top areas of study in the universities the Seventh-day Adventist Church operates.
All About Values
But education for Beardsley isn’t merely about career preparation, important though that may be. Instead, it’s to impart moral values that can resurface at surprising moments, such as in the life of Paul Rusesabagina, the Rwandan hotel executive who studied at that nation’s Gitwe Adventist Secondary School, and who credits his education with the values that made him a hero during the 1994 genocide in that country.
“We don’t know where people will be later in their life and the seeds that are sown will bear fruit later,” Beardsley said. “It might be when they have children and they think about what they want to do for their own children and the best possible environment. This is where many who had an early Adventist [educational] experience will say, ‘This is an experience I want to provide. I want to provide my son or daughter with every advantage academically and spiritually.’ I do think we need to be held accountable, and we do need to communicate that Adventist education is achieving good educational outcomes and good spiritual outcomes, in the aggregate.” 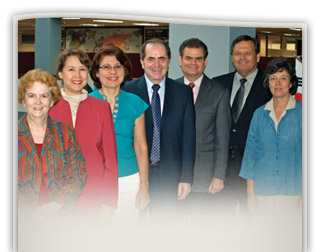 Speaking to world church leaders during the 2010 Annual Council, Beardsley said the department has four goals for the next quinquennium, or five-year period.

“Foremost is to reinforce Adventist identity and mission,” she said, adding, “the second goal is to strengthen leadership and administration, and demonstrate accountability; third, we seek to expand the capacity of all teachers to achieve the redemptive purposes of Adventist education and to model Adventist values and lifestyle, and to increase, where needed, the percentage of Seventh-day Adventist teachers who work in the system; and fourth, to nurture Seventh-day Adventist students in non-Adventist higher education and [to] partner with other GC departments” in carrying that out. Chief among those departments, she said, are Chaplaincy, Children’s Ministries, Youth, and Family Ministries.
Turning to Adventist-owned schools, Beardsley, speaking with Adventist News Network earlier this fall, said that she is concerned about the numbers of non-Adventist teachers being hired at overseas universities. What defines Adventist education, Beardsley says, is who’s teaching the class.
That’s why one of her goals over the next five years is to empower teachers to continue integrating faith with learning and increase the percentage of professors who are members of the denomination.
“All of our teachers, even those teaching in an M.B.A. program at night, need to understand how they can further redemptive purposes in their instruction,” Beardsley says.
Additionally, she wants to increase spirituality on Adventist campuses, which emphasizes a balance of study, work, service, and rest. That might include somehow boosting the influence of religion and theology departments on campus. The programs are shrinking relative to other disciplines in response to market demand and now have less of an influence on a campus culture,
Beardsley says.
“We need those teachers to exert leadership and influence not just for their students, but for the intellectual and spiritual climate of the entire campus,” she says.
Although she seeks to increase Adventist identity and spirituality on denominational campuses, Beardsley isn’t opposed to exposing students to a variety of ideas and evidence, even when in conflict with official Adventist beliefs.
“It needs to be done, but in balance with Adventist identity and mission,” she says. “It needs to be done in appropriate context at the right time and with sufficient support for students as they wrestle through intellectual issues, such as what is the current scientific thinking about the age of the earth, and how do we reconcile that with our belief that God is our Creator.”
Still, she cautions that such topics should be taught with “maturity, judiciousness, and mindfulness.”
“There are things that academics talk about among themselves with other professors, and there are things they talk about with undergraduates. And it’s not the same thing. . . . We should never throw our students to the wolves and let it be survival of the fittest.”
________
Mark A. Kellner is news editor for Adventist Review and Adventist World magazines. Ansel Oliver is assistant director of news for the General Conference of Seventh-day Adventists. This article was published November 18, 2010.
Advertisement
Advertisement