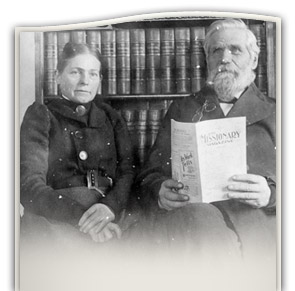 BY Kameron DeVasher
This is the second, and last, part of a study of the late-nineteenth-century holy flesh movement in the Seventh-day Adventist Church. As we study our history we may be better prepared to face our future.—Editors.
In the first installment of this series we saw how the Indiana Conference became the stage for the holy flesh movement in the late nineteenth century. Led by conference revivalist S. S. Davis, the movement was composed of two unique characteristics: “a sinless flesh” message and a charismatic worship experience. In short, people were encouraged to exchange their sinful natures for Christ’s sinless nature brought on by a full-body surrender in worship.

Growth of the Holy Flesh Movement

Over time S. S. Davis and his small revivalist team won the support of R. S. Donnell, the Indiana Conference president. Through the influence of these key leaders, the overwhelming majority of conference pastors and conference committee members united behind the holy flesh movement. In fact, as far as we know, there were only a handful of pastors who resisted the new movement, and one of those, O. S. Hadley, pastor of the Indianapolis church, apparently had his ministerial license revoked because of his conscientious objections to what he saw taking place. One eyewitness reported, “Elder O. S. Hadley opposed this doctrine openly, and taught that it was fanaticism. Because of his attitude, his credentials were taken from him.”1 Despite such outspoken opposition by a faithful few, each of the Indiana camp meetings held during the year 1900 became showcases for the new theology and charismatic worship of the holy flesh movement.
The Haskells’ Correspondence With Ellen White
Just the year before, in 1899, S. N. Haskell and his wife, Hetty, had returned to the United States from Australia. One of his first assignments was to attend and speak for one of the three Indiana camp meetings in 1900.

Immediately, the Haskells noted the extreme emotionalism and astonishing behavior that marked the meetings. At once they wrote to Ellen White for counsel, who at the time was also en route back to the U.S. from Australia. Haskell explained to Mrs. White the theology driving the holy flesh movement and its variance from the standard teaching of the church. “When we stated that we believed that Christ was born in fallen humanity, they would represent us as believing that Christ sinned, notwithstanding the fact that we would state our position so clearly that it would seem as though no one could misunderstand us. Their point of theology in this particular respect seems to be this: They believe that Christ took Adam’s nature before he fell; so He took humanity as it was in the garden of Eden, and thus humanity was holy, and this is the humanity which Christ had; and now, they say, the particular time has come for us to become holy in that sense, and then we will have ‘translation faith’ and never die.”2 After explaining his impressions of the events in Indiana, Haskell added, “I have no doubt, however, that the Lord will open up the whole scene before you; and for the sake of the poor sheep in Indiana, I pray God that you may have a testimony to send them.” Ellen White received the Haskells’ letters upon her arrival in California.