Just before the 1990 General Conference (GC) session in Indianapolis, Indiana, I received a call from an Adventist brother in California. “Can you do an article on term limits?” he asked.
“Yes,” I promised, “that sounds like something I’d like to do sometime, though not at the moment.”
He understood. But I suspect that both he and I expected it would be within a year or two. Now here we are, more than 20 years later. Incredible!
As the idea bounced around in my head over the succeeding years, I alternatively would feel both pro and con. And as more and more time passed, I began wondering how many in the church really gave a hoot about the issue anyway.
Then one day during the 2005 GC session in St. Louis, I looked up at the television monitor in the Adventist Review office, and the hot topic on the floor of the session was precisely the one I’d mentally shelved: term limits.
The Debate in St. Louis
The 2000 GC session in Toronto had voted that the GC’s Constitution and Bylaws Committee consider an amendment to the bylaws, limiting the term of office of a GC president to two consecutive terms of service. The recommendation from that committee to the St. Louis session was “that the change not be approved.”1

But U.S. delegate Brian Bull was not buying it. We’ve got to find a way, he said, to adjust for “the enormous benefit enjoyed by an incumbent.” One possibility, he offered, would be “to require a two-thirds vote of the Nominating Committee to report a name back to the floor after they have served two terms or 10 years, whichever is the longer time period.”2

However, Bull’s motion to refer the item lost.
Also arguing against the committee’s recommendation, Canadian Berthold H. Stickle (then a delegate from the Southern Africa-Indian Ocean Division) observed that “it is very difficult and painful sometimes to tell a fellow worker that it is time not to continue. It is much easier if we have a policy in place that eliminates some of that pain.”3
Defending the committee’s recommendation, its chairman Gerry D. Karst (at that point in the session newly reelected GC vice president) reminded delegates “that when we come together in session, those in elected office no longer have a job. It is the responsibility of the Nominating Committee and this body to choose to reelect them or to find others to fill the positions.” He did not want to see the session “impose limits that might hinder the direction that the Holy Spirit might move us at some future time.”4
The motion to reject term limits carried.
What I found significant in the debate was that at no time was there any hint from either side that term limits were once an adopted policy in the Adventist Church. Following (in italics) are the relevant sections of the minutes of the Autumn Council convening in Omaha, Nebraska, October 20-27, 1931:
TENURE OF OFFICE:
Whereas, A principle of conference management is clearly stated in the Spirit of Prophecy, in these words:
“I have been shown that ministers should not be retained in the same district year after year, nor should the same man long preside over a conference. A change of gifts is for the good of our conferences and churches.” (Gospel Workers, p. 420.) And,
Whereas, Our experience has proven that very long tenure of office in the same position is not for the best interests of the work . . . ,
Resolved, That we adopt as our working policy—
1. That the tenure of office for General Conference executive officers and heads of departments (including divisions) shall not exceed twelve consecutive years in any one position.
2. That the tenure of office of union executive officers and department secretaries shall not exceed eight consecutive years in any one position, in the same union.
3. That the tenure of office of local conference or mission executive officers and department secretaries shall not exceed six consecutive years in any one position, in the same conference or mission.5
When Did Things Change—And Why?
Evidence suggests that the practice of term limits at first received enthusiastic approval in the church. A 1933 GC committee spoke of “the wide approbation given the tenure of office plan,” leading the committee to expand the policy’s reach in North America to include pastors and members of local conference committees.6
By 1938 we see a further extension and broadening of the areas of the church where the policy should apply. For example, in the North American Division, “the term of service of a worker in any one conference [was] not ordinarily [to] exceed twelve years.” And while workers in our institutions stood beyond the ordinary purview of the policy, the GC committee, nevertheless, suggested that “even in our institutions changes in leadership are at times desirable; and that the spirit of the policy should therefore apply as the respective boards in counsel with the next higher organization shall be able to arrange.”7
Notwithstanding such early enthusiasm, the policy did not survive. Pinning down the exact cause, however, is not easy. But as one reads between the lines, it’s possible to identify certain developments as indirect harbingers of the policy’s eventual demise. 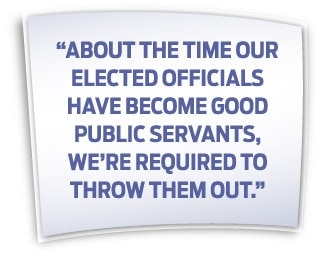 “It was a 20-minute introduction that reviewed a whole catalogue of accomplishments in the conference under Kibble’s administration. And what impressed me at the service was the smooth transition of power. No ‘bloodletting.’ No acrimonious, late-night constituency meeting. No unseemly holding on to power. No stonewalling refusal to hand over power. No hard feelings on the part of the outgoing couple.”17
In a September 28, 2005, telephone interview with current Allegheny East president Charles L. Cheatham (who succeeded Kibble), I asked for his take on the idea of term limits. “I see [it] as a very good thing,” he said. “It avoids the manipulation of power on the basis of the popularity of the particular person in office at the moment.” One drawback, he noted, would be that some constituents might find themselves frustrated if things are going well in the conference, and yet, because of the policy, the office still needs to change hands. “But because of term limits,” he noted, “we have not experienced the kind of conflict and upheaval that some other conferences have had during constituency time.”
Interestingly, the concern voiced by Cheatham—about constituents being forced by policy to change a president they’d prefer to keep—was precisely the question Ellen G. White was addressing in the statement from which the 1931 Annual Council quoted in its term limits policy preamble.
“The question is asked me,” she said, “if it is not a mistake to remove the president of a state conference to a new field when many of the people under his present charge are unwilling to give him up.”18 White’s counsel went contrary to what many of us would have offered: “The Lord has been pleased to give me light on this question. I have been shown that ministers should not be retained in the same district year after year, nor should the same man long preside over a conference. A change of gifts is for the good of our conferences and churches.”19 This is true where a leader is weak, White says, but even where it’s just the opposite: “If a laborer is spiritually strong, he is, through the grace of Christ, a blessing to the churches, and his labors are needed in different conferences.”20
So how should we respond to such unequivocal, divinely inspired logic? I would say that unless someone is able to show that contemporary circumstances have so drastically changed the picture that White, if she were writing today, would counsel differently, we should come down on the side of term limits—in the restricted areas White described.
However good or spiritual a leader might be, there are bound to be people, equally committed and spiritual, who’d find their leadership style unattractive, irksome, even oppressive. And the thought of a seemingly endless tenure could become burdensome and discouraging. Term limits carry the hope that no administration would last forever.
If a country the size and complexity of the United States could function under an 8-year term limit, it’s difficult to make a credible case that the Adventist Church would suffer under limits that extend two years longer.
I keep remembering those famous lines I learned back in high school:
“The old order changeth, giving place to new;
And God fulfills Himself in many ways,
Lest one good custom should corrupt the world.”21
_______
1 See GC Bulletin No. 7, July 8, 2005, p. 31.
2 GC Bulletin No. 8, July 14-28, 2005, p. 35.
3 Ibid., p. 42.
4 Ibid.
5 GC Committee minutes, Oct. 20-27, 1931, p. 430.
6 Ibid., Oct. 17-24, 1933, pp. 1085, 1086.
7 Ibid., Oct. 14-27, 1938, p. 946.
8 Ibid., Mar. 15–Apr. 29, 1937, p. 356.
9 Ibid., Oct. 14-27, 1938, pp. 945-947.
10 We might keep in mind, however, that a new president never begins from scratch. We don’t have a party system in the church, with a president of a different party having to initiate brand-new programs or approaches antagonistic to that in a previous administration. And while each new president would likely have a particular emphasis they want to give, we needn’t assume radical changes with every new president.
11 “Term Limits Voters Guide,” www.perkel.com/politics/issues/limits.htm.
12 Cited in Matthew Vita, “Political Appeal of Term Limits Appears to Wane,” Washington Post, July 17, 2000, p. A1.
13 Susan Heavey, Term Limits Special Report, up-dated Mar. 5, 1999, www.washingtonpost.com/wp-srv/politics/special/termlimits.htm.
14 Franklin D. Roosevelt was the only U.S. president elected for a third and fourth term. After his death, the Twenty-second Amendment to the Constitution lim-ited the president to two terms only.
15 Marc Fisher, “Like All Fads, Let Term Limits Just Fade Away,” Washington Post, Oct. 7, 2000, p. B1.
16 Joan Biskupic, “California Term Limits Beat Challenge: High Court Lets Stand Ruling on Curbs for State Lawmakers,” Washington Post, Mar. 24, 1998, p. A9.
17 Allegheny East is the largest conference in the eight-state territory of the Columbia Union, with some 41,000 members. Its term limits policy applies to the office of the president only.
18 Gospel Workers, pp. 419, 420.
19 Ibid., p. 420. (Italics supplied.)
20 Ibid., p. 421.
21 Alfred Lord Tennyson, Morte d’Arthur (Death of King Arthur) [1842], Line 408.
_________
Roy Adams is an associate editor of the Adventist Review and Adventist World. He recently announced his retirement, effective November 1. This article was published October 21, 2010. .
Advertisement
Advertisement

Letters
Inbox
Who Cares | Inspiring Issue | God Has Called You to Be the Bible to Non-Christians | Indianapolis Will Host 2030 General Conference Session
Commentary
No King but Caesar?
To whom or what do you dedicate your thoughts, time, and energy?