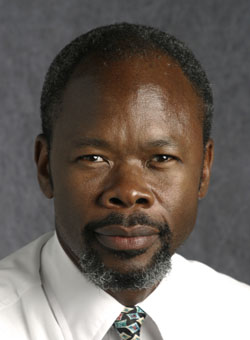 
New Associate Editor Succeeds Retiring Roy Adams; Editor Knott, Staff Reappointed
BY ADVENTIST REVIEW STAFF
Lael O. Caesar, a professor of religion at Andrews University in Berrien Springs, Mich., will become an Associate Editor of Adventist Review and Adventist World magazines, the general papers of the Seventh-day Adventist Church. Caesar will succeed Roy Adams, whose 2010 retirement brought a close to his 22 years on the magazine’s team.
Caesar, whose wife Lena is also chair of the Speech Pathology and Audiology Department at Andrews, an institution of the General Conference of Seventh-day Adventists, is expected to join the staff following the close of the current academic year. He has spent 14 years on the Andrews faculty, winning “teacher of the year” honors multiple times; he has also taught at Montemorelos University, a Seventh-day Adventist school in Mexico, and has also served the church in the Caribbean, South America, the Middle East, Russia and Western and Southern Africa.

“I am delighted to have Lael Caesar join the editorial team of Adventist Review and Adventist World,” said Knott. “Lael is a talented author and Bible scholar whose work will strengthen and enrich the ministry of these two international magazines. His skills as a preacher and in the classroom have endeared him to thousands of Adventists around the world, and his warm, pastoral personality emerges in everything he produces. Readers around the world will come to enjoy Lael’s love of words and his deep and abiding love for the Word of God.”
Associate Editor Klingbeil added, “As a fellow Old Testament scholar, I have known Lael Caesar for over a decade and appreciate his humble commitment to the Word of God, his wonderful capacity to connect with people from many walks of life, and his great gift to communicate effectively and with warmth.”
Caesar, who has often told the story of his determination, at age 15, not to follow in the faith of his parents after he’d left home, has been a lifelong Seventh-day Adventist member and church worker. Born in Guyana, he earned a bachelor’s in theology at church-owned Caribbean Union College in Trinidad; a master’s in religion at Andrews; and both a master’s and a doctorate in Hebrew and Semitic Studies at the University of Wisconsin-Madison.
“I am still a Seventh-day Adventist because, backward and forward, the temporal and theological line from Christ’s salvation miracle to my origins and my destiny runs more sure and true in Adventist understandings than in any other I’ve encountered—or that I anticipate encountering,” Caesar wrote in an Adventist Review article published August 9, 2001.
Since 1849, Adventist Review has been the flagship journal of the Seventh-day Adventist movement, having commenced publication 14 years before the church was formally organized as the General Conference of Seventh-day Adventists in 1863. Today, Adventist World, the international paper for the church, which appears in 13 languages in print and/or online, joins the Review in communicating news of the world church to its constituency.
More information about the publications can be found at www.adventistreview.org and www.adventistworld.org.
Advertisement
Advertisement