Bibles for a New Life 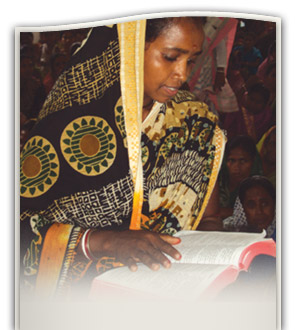 BY SANDRA BLACKMER It’s been more than a year and a half since the Adventist Review—in cooperation with Hope for Humanity—launched its fund-raising campaign called Bibles for a New Life (see January 15, 2009, issue or go to www.adventistreview.org/issue.?php?issue=2009-1502&page=17), so it seems time to update our donors on the project’s progress. The funds raised were slated for purchasing Bibles and carrying cases to present to graduates of the women’s literacy program in India run by the Southern Asia Division’s (SUD) Women’s Ministries Department. The goal was $20,000. At a cost of $5.00 for each Bible and carrying case, this would be enough to pay for Bibles and cases for the estimated 4,000 students who graduate from this initiative in one year. To date, Review readers have sacrificially contributed $77,692.98—and donations continue to come in!
What Is “Bibles for a ?New Life”?
The World Factbook says that only 48 percent of India’s women over the age of 15 can read and write, compared to 73 percent of the men. SUD’s Women’s Ministries director Hepzibah Kore, and others, said they were “compelled” to combat this high rate of illiteracy among women, and beginning in 2001 spearheaded a project to teach women in India how to read.
Today, their efforts have spawned more than 200 learning centers each year in six provinces in the southeastern region of India, West Bengal, and Nepal. Most are in remote villages.

EVIDENCING HER READING SKILLS: This woman read aloud from her newly acquired Bible to those attending the graduation.

About 20 students ages 15 and older—mostly women but some men—attend classes two hours a day, five days a week, for one year. When the students graduate, the Women’s Ministries Department awards them a Bible and a carrying case. Because of Review readers, more than 15,500 students—the estimated number of graduates in a total of about four years—will own their own Bible.

“Through the support of Hope for Humanity, more than 30,000 women have benefited from the literacy classes,” Kore says. “Although some of them could not go beyond signing their names, all have heard health messages and received counseling and tips on how to have a better quality of life. This has made a positive impact on the families, the churches, and the neighborhoods.”
What’s Happening Now?
In 2009, 3,756 students (1,771 Adventists, 428 other Christians, and the rest Hindus and Muslims) regularly attended literacy classes. More than 3,700 completed the course; 221 accepted Jesus as their Savior; and 26 new Adventist congregations were organized. Although being able to read and write is something most of us take for granted, for the women in the literacy program, it dramatically changes not only their own lives but also the lives of their families. Personal stories in SUD’s Women’s Ministries Department’s 2009 closing report evidence these life-changing results. Here are a few examples:
•Two years ago, Suvarthamma, from the village of Kyathuru, had to borrow a significant amount of money from her relatives to cover medical expenses for her husband’s terminal illness. After her husband died, her relatives demanded that she return not only the amount of money she borrowed but more than double that amount. Suvarthamma didn’t have the funds to do this, so her relatives asked her to sign over ownership of some of her land. They told her the land value was equivalent to the amount she owed them. Because she was now able to read, Suvarthamma examined the official documents relating to her land and discovered that the land was much more valuable than she had been led to believe. She then took her case to local village officials, who resolved the issue in her favor. Suvarthamma credits the literacy classes for providing her with the skills to accomplish this.
•Sunandamma’s husband forbade her to attend the literacy classes, so the class facilitator began going to Sunandamma’s home when her husband was at work to teach her how to read. One day her husband came home to find several women in front of his house talking with his wife. These women, who had refused to attend the literacy classes, had come to ask Sunandamma to read for them. “Are you truly reading?” the husband asked Sunandamma. “How is this possible?” When he first learned that Sunandamma had been learning to read at home, he was angry. Eventually, however, he began boasting of his wife’s accomplishments. 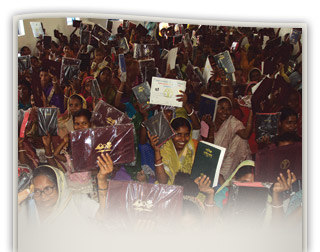 PROUD GRADUATES: Adventist Review readers provided the funds for the Bibles and carrying cases that the graduates of SUD's literacy clases are holding up.

•After attending the literacy classes, Elizabeth, from Velmorapalli, discovered that the train’s ticket collector was cheating her, because she now could read the receipt he gave her. It indicated that she had paid much less than she actually had for her fare, so Elizabeth confronted him. “He was astonished and asked me if I went to school,” Elizabeth says. “So I told him about the adult literacy classes being conducted by my church.” Other women on the train at the time told Elizabeth that they appreciated her standing up for what was right.

•Sampathi, the wife of an Adventist pastor, did not attend school when she was a child, so she has learned to read by attending the literacy classes. She is now better able to support her husband in his pastoral responsibilities.
“The adult literacy program is a powerful tool for changing lives,” Kore says. “Knowing how to read and write dramatically affects a woman’s self-esteem and greatly raises the level of respect that her husband, children, and neighbors have for her. It also opens up numerous possibilities for a woman’s livelihood, thereby raising the family’s standard of living.
“But most important,” Kore adds, “these women are learning about the love of Jesus and sharing their newfound faith with others. I thank the Lord for each person who has supported this program and played a role in opening the eyes of the illiterate to see the Word and the world. The far-reaching results won’t be fully known until we all meet together in our heavenly home.”
To learn more about the literacy program, go to www.hope4.com. To read the original Review cover story that launched the Bibles for a New Life fund-raising initiative, go to www.adventistreview.org/issue.php?issue=2009-1502&page=17.
__________
Sandra Blackmer is features editor of the Adventist Review. This article was published August 26, 2010.
Advertisement
Advertisement