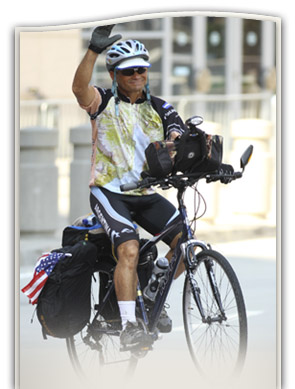 By Elizabeth Lechleitner, Adventist News Network Few people can say they’ve visited more than a handful of countries in less than a year; but one Seventh-day Adventist has bicycled across 11 nations since August 2009 in an 8,600-mile journey meant to spread the church’s message of hope.

George Silva’s trek began in his native Brazil, where the 49-year-old began his journey in Boa Vista and pedaled through northern South America.

Silva pedaled or pushed his bike—once for four hours straight after facing five flat tires in one afternoon—through most of Central America and cycled through several southern-tier states of the United States to arrive in Atlanta on the morning of June 24. Around 10:00 a.m. local time, Silva was swarmed by church members and delegates, many of them from Brazil, as he arrived at the Georgia Dome.

Silva, who said he was often depressed and troubled as a young man, once nearly resorted to suicide before having a fortunate encounter with an Adventist literature evangelist, who challenged him to attend church.

ARRIVAL: George Silva arrives at the Georgia Dome in Atlanta on Thursday, June 24, completing his 8,600-mile bicycle journey from Brazil. It took the Adventist Church member 11 months to pedal to the denomination’s world session, while raising awareness of the church’s mission along the way.

Disheartened by the overwhelming number of denominations, each with seemingly incongruent beliefs, Silva shelved his search. Years later, he again felt impressed to find God. The next day another literature evangelist visited Silva’s home and gave him the address of the local Adventist church. “For the first time, I felt comfortable in a church,” Silva said. “That same day I asked to be baptized.”

On his way to Atlanta, Silva averaged 75 miles per day, biking for seven hours, then taking a three-hour break to rest and eat before cycling for another seven hours.

Asked whether crossing the Panama Canal posed challenges, Silva said finding a boat ride across was barely a hurdle compared to passing through a treacherous, guerrilla-controlled wooded area near the canal. Locals warned him guerrillas would likely kidnap him, but in his mind backtracking wasn’t an option, and he didn’t have money for a plane ticket to fly over the area.

Noticing a motorcyclist riding toward him, Silva panicked. “I thought he was coming to kill me,” he said. But instead, the man guided him to the beach, where Silva took a boat across the Canal to Central America. “I believe that when I get to heaven, Jesus will introduce me to the angel who guided me through the jungle and brought me from Colombia to Panama in one piece,” Silva said.

Silva believes God also protected him from the elements during his journey—temperatures ranged from below zero to 105 degrees Fahrenheit. Once a hailstorm destroyed local crops and property, but Silva, equipped only with a tent, escaped unscathed.

As he biked through their countries, locals were curious, Silva said. “They asked me, ‘Why are you doing this? Why are you leaving your family, your country?’ I always told them that Jesus is coming soon.” A number of people decided to follow Jesus after hearing his testimony, he said.

In Other Words
Races
Which ones are worth winning?