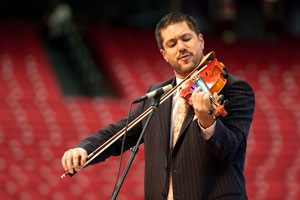 Hitting the Right Note
Behind the scenes with the Music Committee

By Sandra Blackmer, features editorMusically gifted individuals aspiring to perform for a General Conference session should be advised that “patience” and “perseverance” are part of the job description. Going through the selection process, applicants say, is definitely not for the “faint of heart.”

“It’s been a 10-month process,” says Dean Kravig, director of the 60-member group called International Brass. “Then the challenge of bringing all these musicians together from nine countries and doing only a four-hour rehearsal is almost overwhelming. We got the music two months ago.”

Ekkehardt Mueller, Music Committee vice chair for the Atlanta session and the newly appointed chair for the sixtieth GC session in 2015, concedes the process is arduous.

“Some aspects of the process begin as soon as the previous session is over, with other parts starting three years before the event,” Mueller explains.

The Music Committee—and its five different subcommittees—functions at the world church headquarters in Silver Spring, Maryland. It asks each church division to appoint a coordinator to receive musicians’ submissions, screen them, then send their best recommendations to the GC—where they are screened again. And there’s no lack of applicants.

“There are so many submissions that we arrange a second tier of musicians who are called upon if some of the first choices for various reasons cannot perform,” Mueller notes.

Planning the music for GC sessions is “a bigger job than some may think,” he says. “Finding the appropriate theme song; choosing the hymns; getting the various language translations; arranging for the music for Sabbaths; planning for the large choirs, the session orchestra, and other groups; organizing the miniconcerts; and this year, coordinating two lectures on church music presented by specialists in worship music—it’s a huge task.”

Obviously, though, it’s well worth the effort—even if music isn’t always highly valued.

“Music is a very powerful language, sometimes underestimated and underappreciated,” says Sam Ocampo from Glendale, California, piano accompanist at the session for world-renowned violinist Jaime Jorge. “A three-minute song like the one Jaime played here [My Tribute: To God Be the Glory] can take the place of an entire 30-minute sermon.”

“One of the highlights of the GC session is praising and glorifying God through music,” Wilson told Adventist Review. “The plethora of international musicians from around the world is a wonderful blessing to the church.”

A wide range of individual and group musicians—vocal and instrumental—have been gracing the stage throughout this 10-day event.

“Music is a vehicle used by God for the spiritual uplifting of people,” says Mark Quijano, one of eight members of the South Korean vocal group Golden Angels. “It opens the hearts and minds of human beings and helps us to understand how great and awesome God is.

“Music also encourages people to do the mission that God has commissioned to each of us.”