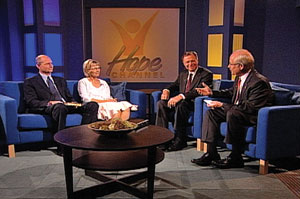 FINLEY: All of us are shaped by our backgrounds. Pastor Ted, you are a kind of international child to the world. Why is that so?

TED WILSON: I grew up in Cairo, Egypt. My parents were missionaries there for almost 15 years. I was born right in the middle of that, and my earliest memories are of the Middle East, and they are very positive memories. So our family has had that kind of international connection.

FINLEY: You’ve lived for a number of years in Africa. Whereabouts?

TED WILSON: We lived in West Africa, in Abidjan, the country of the Ivory Coast or Côte d’Ivoire. And traveled extensively in West and Central Africa. We’ve also lived in Moscow, Russia, and had a wonderful experience in both places. It has enriched our lives, and the people we have become acquainted with have remained friends all this time. It’s just like our hearts are still in those places.

THORP: Do you speak languages other than English?

TED WILSON: Well, I speak French, and get along fairly well with that. I speak a little bit of Russian and an even smaller amount of Arabic.

FINLEY: Nancy, your background was quite different.

FINLEY: Where were you born?

NANCY WILSON: I was actually born in Los Angeles [United States], but when I was still an infant my parents moved to Asheville, North Carolina. I went to the same church, [same] school, [lived in the same] house. We took our vacation to the mountains two hours away from where I lived. So it was a very homogenous setting. We rarely heard another accent.

FINLEY: Tell us about the spiritual atmosphere of your home.

NANCY WILSON: Friday nights were the best part of the week, and we all looked forward to it. By sundown the house was sparkling clean. Mother was a real gardener, and she had beautiful flowers all over. That was as much a part of Sabbath as a clean house and special food. The cooking was done; we always had special meals—they were simple but we loved them. In the wintertime we had a massive fireplace, and we would often sit around the fireplace and just watch the fire. It was the best part of the week. We would have family worship together, and often we would all pray after my father would read something.

FINLEY: How have you tried to pass along these values to your own children?

FINLEY: Nancy, how do you see yourself supporting your husband in this new role?

NANCY WILSON: I think my first duty is to stay close to the Lord and be a prayerful wife, because as he is dealing with all the demands of his job, he is going to need my support more than ever.

FINLEY: What is the spiritual hallmark of leadership?

TED WILSON: Leadership is based on your own relationship with Christ, and you realize that being a spiritual leader will provide inspiration for people if they see in you that connection. Spiritual leadership involves a lot of listening. Leadership [is] acquired through claiming James 1:5, and that when you lack wisdom you ask for it. I try to claim that promise every morning.