A Certain Sound, or a Comfortable Sound?

EXT SUMMER OUR CORPORATE CHURCH WILL BE DEEPLY ENGAGED IN THE selection process of leaders who will take the helm in leading this denomination at a pivotal period in both the world and our church. Now, more than ever, there is need for leaders of the Issachar variety, who understood the times and knew what Israel should do (see 1 Chron. 12:32).

Selected leaders will be confronted with a massive agenda that will require great wisdom and forward thinking in helping to position our church to speak prophetically and relevantly to a world that now exists, quite literally, on the brink of disaster.
So how will we go about choosing leaders in a time when the church will need, more than ever before, people who can lead and speak with a “certain sound”?
The apostle Paul, that great and decisive leader of the New Testament church, spoke to the value of a certain sound when addressing the practice of public speaking in tongues in the church at Corinth (see 1 Cor. 14). 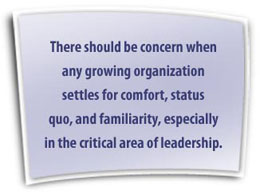 Corinthian believers were standing up in church and simultaneously speaking in unknown tongues. It was chaotic. Paul counseled the church that if unbelievers walked in and heard this cacophony of indistinguishable voices, they would be completely confused as to what was going on. He then tapped into an illustration to help them fully grasp what he was saying.
Paul’s illustration used the image of an army, summoned into battle by the sound ?of the trumpet. If the trumpet’s call is not certain or distinguishable, the army will be confused as to what it is being called to do. Clarity, more specifically, a “certain sound” ?is absolutely essential to the army’s mission and success. But note something else I saw ?in Paul’s illustration: It was about a “certain sound,” not a “comfortable sound.”
There should be concern when any growing organization settles for comfort, status quo, and familiarity, especially in the critical area of leadership. While most of us have ?a penchant toward the familiar, the familiar is not always necessarily what’s best. And may I quickly add that that’s not to say there is no value in the familiar, because there is. But it spells death to any organization where that is the sole criterion.
There comes a moment in leadership selection for any organization where familiarity and inbreeding can present a challenge. In any organization (church, corporate, academic, etc.) that plays out when people are in a leadership context so long that everything and everybody has a sameness to it. Fresh perspectives are absent. New approaches are rarely considered. Different thinking can sometimes even be threatening.
When Jesus chose His leadership team, He easily could have selected from among the key leaders of the Temple only, as they would have been a comfortable fit. But He was not into comfort, but challenge. He didn’t limit His search to one area only, but searched broadly for those into whom He could pour a fresh perspective regarding His kingdom agenda.
In this season of our church’s mission, those who can simply manage are not adequate. The times demand those who can lead. And as always, those who understand, like the great leader Nehemiah, the power of leading on their knees.
God always raises up leaders who are people of their times. They occasionally come from the most unlikely and lowly places of leadership: Gideon, chosen off the threshing floor; Peter, called off the fishing boat; Nehemiah, asked to step into service from a government job; and Moses, tending sheep on the backside of the desert. The one common thread is that when they stepped into leadership, their entire organization became fit and focused on the mission.
We need leaders for the future who will blow a “certain sound,” not just a “comfortable sound.”
_____________
Fredrick A. Russell is president of the Allegheny West Conference with headquarters in Columbus, Ohio. This article was printed December 17, 2009.