A Year of Miracles

ontana Seventh-day Adventists and others connected with Mount Ellis Academy in Bozeman, Montana, are not only supportive of the school, but view it as especially blessed by God—and they have good reasons to do so. Last school year (2008-2009), direct and dramatic answers to prayer became the norm, taking the school from a budget deficit of $85,000 to a break-even budget and $70,000 in the black in its student aid fund. Darren Wilkens, the school’s principal of seven years, can explain it only one way:

“This was just the year when God said, ‘I’m going to be the One who gets you through.’”
A Rocky Start
With student enrollment at about 80 and a total of 17 teachers, administrators, and support staff on the payroll, Mount Ellis Academy (MEA) could not afford such a tenuous financial start. The school, established in 1902, has a long history of exceptional support by alumni, Montana Conference constituents, and conference leaders; nevertheless, Wilkens was worried.
“Up until last year we’d gone five years in a row operating in the black,” he says. “We hadn’t had to ask the conference for any special allocations. We had a fairly stable although not large enrollment, and we’d experienced a very successful development and fund-raising program. So we went into last school year scratching our heads, knowing that we were already operating on a bare-bones budget with really no place to cut.” 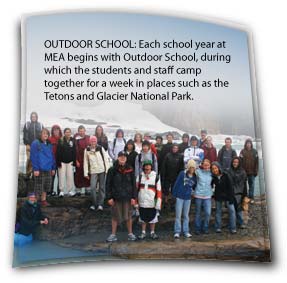 Wilkens took the problem to the staff—and to the Lord.
“At our first faculty meeting of the school year, I just told the staff, ‘This is what we’re facing. We’re really going to need God to come through for us, because no amount of ingenuity on our part is going to do it.’ So we had a prayer meeting right there.”
And the results, they say, astounded them. The next day a check for $25,000 from a school alumnus arrived in the mail. “It was an unrestricted check for operations, which is exactly what we needed,” Wilkens says. But the donations didn’t stop there.
At the next weekly faculty meeting the staff thanked the Lord for answering their prayer—then asked for more. A few days later a $15,000 donation check landed in the school’s mailbox. The same routine was followed the next week at staff meeting, and again a check for $30,000 arrived.
“We had a prayer meeting every week,” Wilkens says, “and for the first two months of the school year this happened every single week! Large donations—$10,000, $20,000 . . . it was remarkable!”
One large financial gift came from a former faculty member, and Wilkens admits he was curious as to how she could afford to contribute such a large sum. So when he called to thank the donor for her generosity, he frankly asked, “What are you doing with that kind of money?” She explained that it had come to her as an inheritance. “I’ve always wished that I could be somebody who could write a big check to a ministry I care about and believe in,” as Wilkens reported the conversation. “Being able to write this check is one of the high points of my life. It’s what I’ve always wanted to be able to do.”
The Funds Keep Coming
After two months donations continued to come in, but a little more sporadically. The two main financial goals for the school year were to raise $120,000 in unrestricted operating donations and $70,000 for student aid. Typically, this happens through direct-mailing appeals, an annual phone-a-thon, the offering from MEA’s Alumni Weekend, and a special offering given each summer at the Montana Conference camp meeting.
But this year was different. “All told, we ended up raising more than $165,000 for unrestricted operating—some $45,000 over our goal—and more than reached our goal for student aid,” Wilkens says.
Wilkens remembers one couple in particular who arrived on campus during last year’s Alumni Weekend. The woman, from the class of 1937, told Wilkens she is a member of the Adventist Church today because of a Week of Prayer she attended at the school when she was a student there. “I want to give something back,” she said. “I want to make it possible for kids to come to school here and reap the same benefits I did.” Then she handed Wilkens a check for $50,000.
A Unique Curriculum
So what makes MEA so special? According to junior student Kait Jones, it’s the friendly people, the broad curriculum, and especially the spiritual atmosphere.
“There are a lot of people here who are connected with God, and the teachers are our mentors,” Jones says. “I think God’s hand is on this school and that He is providing for us. This school is doing His work, training teenagers how to become more Christlike and to get to know Him. It’s a blessing that God brought me here.” Jones also sees the low student-teacher ratio as helping students develop more personal interactions with faculty. She concedes, however, that it was the many outdoor adventures available that first drew her to the school.
“I love the outdoor activities; you’re always doing something,” she says. “It’s really a better way of learning when you’re out there and seeing things yourself rather than reading about them in a textbook.”
Wilkens also sees the outdoor pursuits as a unique strength of the school, located in the mountains of southwestern Montana, 80 miles north of Yellowstone and 350 miles south of Glacier National Park.
“We have just incredible natural resources around us that lend themselves to a lot of outdoor, experiential, adventure-based learning,” Wilkens notes. “We’ve tried to capitalize on that, and one of the easiest places to do that is in the P.E. [physical education] program.”
Under the tag “Lifetime Sports,” junior and senior students can sign up for backpacking, skiing, snowboarding, rock climbing, jogging, and strength training. MEA even owns and operates its own ski lodge.
Growing Leaders
Students describe MEA as a “fun place,” but they’re also quick to acknowledge that its main foci are spiritual growth and strong academics. Parents agree. Becki Knight’s two daughters attended MEA last year. The older one graduated in May and was awarded a full-ride scholarship to any university in Montana because of her high GPA as well as ACT and SAT scores; the younger daughter is a sophomore. Knight says she is especially impressed with the school’s elective Ministry class. In existence for three years, it teaches students how to write and preach a sermon, lead a small Bible-study group, organize meaningful praise and worship programs, and incorporate practical ways to share their faith in everyday living. “These kids are going into adulthood with experience they’ve gained in terms of spiritual leadership that they can take to their home churches, on to college, or into their adult life and be prepared to minister to their own church families,” Knight says.
Knight believes the copious donations last year were “nothing short of a miracle,” which “affirms the reality of God and that His resources are unlimited.” She describes the experience as “something the kids at Mount Ellis can take with them into adulthood. They can say, ‘I saw this happen, and I know God is real.’”
Science teacher James Stuart adds that he is “amazed” by the support people give to the school. “It just blows me away every year,” he says. “Alumni who attended here—who may now be living in faraway places—send their kids to Mount Ellis because they believe so much in this place and how it affected them when they were here as students. The donations show the support of the school.”
MEA junior Jaime Woodall, who moved to Bozeman with her family in 2004, concurs. She describes last year as a time when she “learned to trust the most in God.” She adds: “The teachers here are great and really focus on God.. . . It’s a really close kind of family here. We all have our differences, but we like that in each other.”
Woodall is looking forward to MEA’s annual “Outdoor School,” during which the students and staff go camping together for a week. “My freshman year we went to the Tetons and had a blast,” she says. “Last year we went to Glacier [National Park]. And this year we’re going on a 48-mile, three-day canoe ?trip down the Missouri River. It’s great here!”
Planning for the Future
No one questions the commitment of alumnus and five-year academy board member Larry Shideler, who drives 500 miles one way from Boise, Idaho—where he lives—to attend the three board meetings held on campus each year. As chair of the school’s long-term planning committee, three additional annual pilgrimages also are added to his itinerary.
“I’m probably up there six or seven times a year,” Shideler says. “It’s a gorgeous drive.” Shideler, who graduated from MEA in 1962, remembers the school as being “newer then. They had just finished building the administration building, and everything was new.”
The first order of business for the planning committee, Shideler says, is raising money for a new septic/sewer system. Next on the list is a new dormitory and then an academy church.
The academy’s vice president for finance, Nancy Lee, agrees that improvements to the school’s physical plant is its greatest challenge.
“Right now we’re faced with having to put in a whole new septic/sewer system before we can build anything else,” Lee says. “This is not an easy thing to raise money for. People are much more interested in something they can see that looks pretty—or student aid, which would be our next financial challenge.”
Summing It Up
After leading the Montana Conference and chairing the academy board for nine years, conference president John Loor, Jr., says “each year continues to get better.”
Loor says he can’t explain why the Lord especially blessed MEA last year. “Mount Ellis has been around for more than 100 years, and I know they’ve had financial crises at other times—and I can’t speak for those times,” he says, “but when you have a whole faculty turning to the Lord and praying for these special gifts, it was a special thing.”
“This is a small conference of about 4,000 members, and trying to operate a boarding academy is a major [financial] drain on a conference,” Loor noted. “During my first few years here we were
always in debt, but then there was a turnaround. It’s a real answer to prayer.”
Conference and school leaders say they realize that in spite of the “year of miracles,” many challenges still lie before them, but they are trusting God to help them meet each one.
“We’re doing everything we can to make the school better all the time,” alumnus Shideler says. “We’re going to be sure that Mount Ellis Academy will be here until the Lord comes. That’s our goal.”
_________
Sandra Blackmer is features editor of Adventist Review.
Advertisement
Advertisement