ary F. Maxson described an Advent meeting she attended in 1864.1 It began with “impressive and profitable discourses” that were part of a weekend series of meetings. Like most early Adventists it was a privilege even to be together, and when they were able to on a monthly or quarterly basis, the entire weekend was used to fellowship together.

Mary described the awesome privilege of getting to participate in the emblems of Communion. Like many other early Adventists who scarcely saw a minister, believers were excited to be able to celebrate church ordinances such as the Lord’s Supper when an ordained minister passed through. “As we bowed in prayer,” she wrote, “every heart seemed drawn out to ?God ‘in strong cries and tears,’ and in pleadings for a blessing. And the blessing came with great power. . . . Deep solemnity rested upon us while we partook of the emblems of our Saviour’s love [the Lord’s Supper]. In imagination we went back to the night on which He was betrayed, and stood with Him in the ‘upper chamber.’”

Maxson continued to describe how the sacred emblems were a foretaste of the heavenly kingdom that she looked forward to in the earth made new. The moment was so sacred that the “holy spell” was finally broken as they sang “one of the songs of Zion.”2
Early Adventist worship was a dynamic, faith-building event that focused on community. Scattered across the countryside, most Adventists could gather together only on a “monthly” or “quarterly” basis. Whoever had the largest farmhouse and barn was typically the person who hosted the meetings. The men would sleep in the barn while the women and children would occupy the farmhouse. Few early Adventists—except in large Adventist centers such as Battle Creek, Michigan, or Rochester, New York—had enough church members to even have a meeting facility (usually called a “meetinghouse,” considering its multi-purpose nature as a school, church, and community gathering place).3
Quarterly Meetings
The “quarterly meeting” was a festive time that usually began on Friday evening and continued through all day Sabbath and Sunday. If the group was fortunate enough to have an Adventist minister around, they would typically let that person preach his (or her) heart out. More often they would have a series of Bible studies interspersed by singing, prayer, and testimonies. The Advent Review and Sabbath Herald played a vital role in such services. Believers would study the Review and look up verses, or sometimes follow outlines for Bible studies about Adventist beliefs that had been published in the magazine. 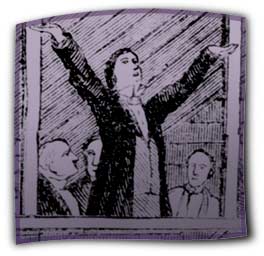