think I was 7 or 8 years old when I first attended a foot-washing ceremony. I was allowed to join about three dozen, mostly elderly, men in a small back room in the building where our church met. It was the time when sock suspenders and long johns were still in abundant use and the custom of the “brotherly kiss” was still widely observed. I remember experiencing it as a rather odd ritual.

I have a suspicion that my youthful feelings of embarrassment are still shared by quite a few people in the Adventist Church today. Yet it seems that at times people outside our faith community are impressed with the fact that we have retained this meaningful service. When I lived in England years ago, a member of our local church told me that the manager of the bank where he worked had voiced his interest in attending an Adventist worship service, and that he wanted to attend the following Sabbath. Our brother wondered whether this was a good idea, since it was going to be “Communion Sabbath.” How would his non-Adventist supervisor react to our “service of humility,” the foot-washing exercise?
As it happened, the man was much impressed. “This is one of the most moving experiences I have ever had,” he commented the following Monday morning.
An Ancient Custom
Early on in my theological training I wrote a paper on the topic of foot washing in the Seventh-day Adventist Church. Later on, my first (more or less scholarly) article in Ministry (July 1966) dealt with the topic. And ever since, the subject has fascinated me. In medieval monasteries monks washed the feet of weary travelers who wanted a bed for the night. In many royal courts in Europe the monarch would wash the feet of a number of their subjects during a special ceremony on Maundy Thursday (the Thursday before Easter). The British Queen continues to donate commemorative coins on that same day to a few of her subjects in a ritual that has its roots in the royal foot-washing ceremony. 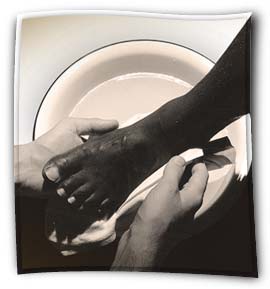