s I sat in Hong Kong International Airport en route to India, I couldn’t help anticipating the adventures that lay ahead. Since I was a child I had wanted to do something like this. I used to sit on my mother’s lap as she read me stories about missionaries in faraway lands. I listened eagerly to tales of witch doctors, wild animals, diseases, and how Jesus turned every uncertain event into something beautiful, miraculous, and inspiring.

In the years since I listened to those stories the excitement never left me. They instilled in me a passion to serve the Lord.
A Dream Come True
When I arrived in India, I smiled when I realized it looked just like those books I saw as a child. Through sunglasses I looked at all the colorful flowers and exotic brown-eyed people in radiant clothing crowding the sunny streets. I saw oxen, goats, even elephants lumbering alongside women in flowing saris who carried water jugs on their heads. I saw street vendors selling papayas, mangoes, and bananas. As I looked out into the flurry of activity, I felt ready to embrace this unique culture.
However, as time wore on, I began to realize all that mission work entailed. This was no vacation! Those stories I listened to as a child neglected to mention the personal sacrifice involved. Pollution and contamination meant we had to be very careful about what we ate and drank. Many American foods were unavailable to us, and I quickly started to lose weight. I began to crave certain foods. I had dreams about sitting at a table overflowing with an abundance of succulent delicacies. What I wouldn’t do for just a plate of spaghetti and a fresh garden salad!
Toward the end of our trip we went into a high-class Indian restaurant and, much to my delight, I recognized “Spaghetti Neapolitan” on the menu. I grinned and licked my lips when I saw it coming. I twirled my fork and eagerly took a bite. But wait! This wasn’t tomato sauce; it was flavored with sweet and sour sauce! 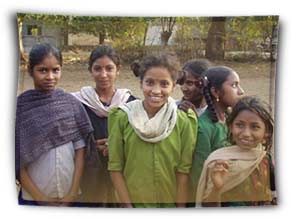