fter the sudden death of her 20-year-old only daughter, Sharon, a Seventh-day Adventist registered nurse, realized her life was never going to be the same again. How could she eat when the child she so lovingly raised and who loved to cook would never taste anything again? In the months following her daughter’s death, Sharon lost 25 pounds. She would lie awake at night for hours, or awaken long before the alarm went off in the morning. As she describes her emotional pain she notes, “I seemed to see myself on the rim of a bottomless dark hole ready to fall in. I felt that if I went there I would never get out, and I pleaded with God to help me.”

The Depression Epidemic and the Adventist Church
Sharon’s loss and grief opened the door for depression—but she is not alone in her struggle. Indeed, depression is increasing dramatically today and turning into an epidemic. The World Health Organization (WHO) predicts that by 2020 it will be the second most debilitating disease and the second leading cause of disease and suffering worldwide, surpassed only by heart disease.1 It is estimated that 350 million people worldwide suffer from depression, and more than 20 million of them live in the United States. It costs the U.S. more than $70 billion in treatment, disability, and lost productivity each year. In addition, studies show that women are two to three times more likely than men to have depression, and one in four women will suffer from clinical depression sometime during their life, versus one in eight men.2
Some Adventists may mistakenly think these disturbing statistics represent only those “in the world”—not in the Adventist Church. After all, Adventists are known to be among the healthiest people around and outlive many others.3 Sharon’s story, however, is not an isolated case in our church today. Ironic as it may seem to some, depression does not discriminate against race, color, or religious affiliation, and many faithful children of God today are suffering from this disabling disease. 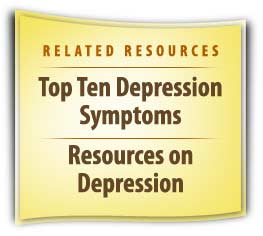 General Conference (GC) Women’s Ministries director Heather-Dawn Small and associate director Raquel Arrais travel throughout the world meeting and talking with faithful Adventist women of all races. They have noted that most women are afraid of talking about their depression and emotional pain. 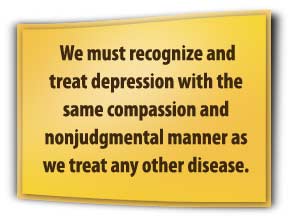 For instance, when we keep the promises of God in our mind and dwell on them, accurate thinking replaces thinking that is distorted by our limited reasoning. For Heather-Dawn Small this continues to be a successful intervention.
“I am stronger because of my belief in the promises of the Bible, even on my darkest days,” Small says. Focusing not on the problem but on the promises is helping to enhance her frontal lobe function.
Cognitive behavioral therapy is not new. The Bible talks about it in Romans 12:2: “Let God transform you into a new person by changing the way you think” (NLT).* And in Philippians 4:8 we read, “Whatever is true, whatever is noble, whatever is right, whatever is pure, whatever is lovely, whatever is admirable—if anything is excellent or praiseworthy—think about such things.” God built into our brain a system for healing and renewal, and He assures us that if we make the choice to improve our frontal lobe by choosing healthful thoughts and letting Him renew our mind, He will heal us.
Many factors influence frontal lobe activity, but personal devotions, Bible study, and prayer are at the top of the list. Scientific studies by Harold Koenig, an associate professor of psychiatry at Duke University, and others indicate that people who are not religious are at greater risk for depression than people who belong to a religious faith. Studies show that even when suffering from depression, people of faith recover more quickly than those who are not religious.9
Hope Beyond Tears
During her daughter’s funeral Sharon was approached by a woman who was suffering from depression because of a similar loss. In a bitter tone the woman said to her, “Your life will never be the same.” As time went by, Sharon found herself becoming depressed and losing interest in living. She then remembered the bitterness and depression evidenced by the woman at the funeral, so she prayed to God for help. She felt led by God to do three things: (1) spend more time with Him through reading His Word and prayer, (2) exercise by walking two miles every morning, and (3) volunteer her time to help others.
Sharon began volunteering on Sabbath afternoons—a particularly lonely time for her—to help feed those in need at her church-run soup kitchen. “God impressed me to find ways to help others and be active in my church,” Sharon says. “This helps me to get the focus off myself.”
She adds that the extra time she is spending with God helps her to stay “mentally balanced” and that her “connection with God is deeper than ever before.”
It has been seven years, and Sharon still misses her daughter, but she found a cure for her depression by trusting in God’s promises and following His plan for healing despite her tragic loss.
El Rapha—The God Who Heals
God specializes in creating, re-creating, restoring, and healing. He created our brain cells with an anatomy for change and renewal. This concept helps us grasp how depression and mental disorders may be healed, bringing us hope for improved mental and emotional health.
In the Bible are stories of many children of God who suffered from depression and found healing. Take the classic one: Elijah. He was so depressed he asked God to take his life. If we look closely, God treated Elijah’s depression not with judgment or shame, but with patience, love, and understanding. He encouraged him to focus on nutrition, rest, and exercise. But that was not all. Elijah had distorted thoughts, so God helped him to replace those thoughts with true, accurate thinking (see 1 Kings 19).
As a result, Elijah’s mind and faith were restored and the depression cured. He was finally translated to heaven after accomplishing God’s mission and became an example of God’s power of restoration for the entire universe to see.
Each of us has a mission to fulfill, and sometimes losses and depression keep us from using all our abilities to complete our mission. But there is hope beyond the tears—hope for relief from depression. God knows and feels our pain, and His prescription will improve our mental and emotional health.
Lovingly He whispers: “I know your tears; I also have wept. The griefs that lie too deep to be breathed into any human ear, I know. Think not that you are desolate and forsaken. Though your pain touch no responsive chord in any heart on earth, look unto Me, and live.”10
__________
*Scripture quotations marked NLT are taken from the Holy Bible, New Living Translation, copyright ” 1996, 2004. Used by permission ?of Tyndale House Publishers, Inc., Wheaton, Illinois 60189. All rights reserved.
______________
1World Health Organization, Conquering Depression, 2001, p. 14.
2Neal Nedley, Depression Recovery Program Workbook, 2006, pp. 26, 27.
3Dan Buettner, The Blue Zones: Lessons for Living Longer From the People Who’ve Lived the Longest.
4Mental Health: A Report of the Surgeon General, NIH, NIMH, 1999, p. 247.
5Ellen G. White, The Ministry of Healing, p. 241.
6Neil Nedley, Depression: The Way Out, 2005, pp. 31-59.
7Ibid., pp. 178, 179.
8NIH-NIMH 2008 publication number 08 3561, “Depression,” p. 16.
9Harold Koenig, Handbook of Religion and Health, 2001, p. 135.
10White, The Desire of Ages, p. 483.
__________________
Katia Garcia Reinert is a family nurse practitioner and health ministry/ fcn coordinator for Adventist Healthcare. She specializes in working with people struggling with depression. She lives and works in the Washington, D.C., metro area. (Published October 8, 2009)