Pieces of a Puzzle

NE MORNING NOT LONG AGO MY WIFE CAROLYN AND I ENCOUNTERED A ?woman outside a neighbor’s house. She explained that she had come to take the neighbor to the ?doctor for some blood tests. The woman was concerned because there was no answer to her repeated knocks and phone calls. She had a key to the neighbor’s apartment and asked if we would go with her into the home.

As we entered we saw our neighbor lying in bed, feebly raising her arm. She was extremely weak and at first was unable to speak. I also noticed that music from the local Adventist radio station was playing in the background.

After telephoning our neighbor’s doctor and her sister, we called for an ambulance to take her to the hospital. A day or two later Carolyn and I visited her there. She told us she was very grateful for our visit and for our intervention. Then she said, “Did you notice that I was listening to ‘your’ radio station?” This opening gave us an opportunity to share with her some hope in Jesus. 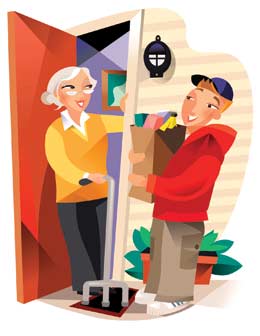 During the previous few years Carolyn and I had become friends with this neighbor. We had helped her with a few simple things, and I also had spoken on the phone with her sister, who also was there in the hospital room visiting that day. Before leaving we prayed for both of them and left some pamphlets about the Second Coming and prayer. We expected to see our neighbor again in a few days, but we never did. She died a day or two later.

Carolyn and I had never been to a Muslim funeral before, but when we arrived we met a number of our neighbor’s colleagues from the college where she worked. They had heard about us, and we were surprised by the warmth with which they greeted us. We accepted an invitation to attend a special family gathering after the burial, and the family asked me to have prayer for the meal.

The sister later wrote to me via e-mail, and I shared a Bible verse with her and assured her that she was in our prayers. I then invited her to come to our home for a visit, and she is planning to do so in the near future.

This experience has emphasized to me that helping others is why we “do” church. Our Adventist media was ministering to my neighbor at the same time that I was shoveling snow for her and when ?I mowed a path in the tall grass because she feared snakes in the area. They were very simple things, ?but to her, her sister, and her college colleagues they spoke louder than any words I could have spoken. I didn’t realize that God was putting the puzzle together for my neighbor. He knew her life was short—?I did not. My little acts were only a part of the puzzle, as was the Adventist radio station and, as I later learned, a former roommate of my neighbor who was an Adventist. Somehow God put everything together to share the love of Jesus with this single individual.

Looking back I wish I had been more intentional in sharing hope with my neighbor before she became so ill, because in the end nothing is more important to our neighbors than we are. Most likely we have very little idea of the puzzle that God is putting together, but each one of us is an important part of one or many puzzles that He has designed.

Don’t depreciate what God can do through you. Someday we all will be surprised by what the little things we’ve done for others accomplished for His kingdom.