In Search of God's Good Mourning

s a well-dressed woman mounted the revival platform in rural Virginia, the evangelist stepped forward to lead her through the sinner’s prayer. The entreaty he usually gave was: “Dear Lord, I know that I’m a no-good sinner. I know I can’t save myself. I need forgiveness for my awful sins. I can’t do without You, Jesus. Please forgive me for my many sins. I here and now receive You into my heart as my personal Savior. I’ll try to live for You from this night on. I pray this prayer in Jesus’ name. Amen!”

Through the years he had led hundreds of repentant sinners to Christ with the very same petition. And that evening, taking the woman’s hand, he began the prayer that she was to recite after him: “Dear Lord, I know I’m a no-good sinner.” Only silence. The woman failed to utter a word. He looked at her and said, “Don’t you want to be saved?”
She said, “Yes, I do want to be saved, but I’m not a sinner.”
“Then you can’t be saved,” the preacher replied. “Jesus died only for sinners.”
“But I’m a good sinner,” she said. 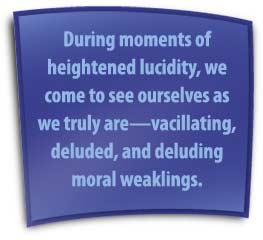 “A good sinner! Lady, there are no good sinners. You will have to take your seat. God can’t save you until you become conscious that you are a no-good sinner and need His forgiveness.”
“But you don’t understand. I’m really not a bad sinner.”
At that point he told her again to return to her seat, but in her indecision she continued holding his hand in a viselike grip. Finally, she looked him in the eyes and cried, “Oh, please forgive me, Lord! I know that I’m a no-good sinner. I’m a proud, hell-deserving sinner. I desperately need Christ’s mercy and forgiveness!”
“Wonderful!” the evangelist replied. “Now you are ready to do business with God.” They prayed together as the congregation applauded. The woman admitted her fallen, sinful state and wept in mournful happiness as she received God’s benediction.
Happy are they that mourn. When Paul admitted that he didn’t understand himself, he described the common state of us all. He wanted to do what was right, yet he frequently failed to do so (Rom. 7:15). He called himself wretched and begged to be free of his body of sin and death, for even as he strove for self-control, an unyielding pride continued to pulse within, while an insidious conceit held sway.
The Sermon-on-the-Mount assurance that God will bless those who mourn (Matt. 5:4) is usually thought to be directed to believers experiencing severe mistreatment or loss. But a more insightful examination of this (second) beatitude indicates that Jesus was addressing those newly despondent over the humiliating state of their impoverished spirituality.
The Case of Harry Golden
Before newspaperman and armchair philosopher Harry Golden (née Goldhurst) hit it big with Only in America, he had already been successful as a New York stockbroker. But in his quest for even greater wealth he talked himself into becoming a bucket-shop broker; that is, he collected deposits to buy and sell stocks, but did neither immediately. Instead, he threw the orders into a proverbial “bucket” and waited for the stock to shift up or down in value. If a client wanted to buy a $100 share, Harry waited until it dropped to $97 and pocketed the difference. But if the investor wanted to sell a $100 share, Harry would procrastinate hoping it might hit $103 so he could again pocket the difference—along with his commission!
Harry hadn’t originated the scam, but his string of rationalizations revealed a reluctance to recognize his criminality: “I was the wise guy,” he bragged, “and my customers were the suckers.” Besides, “I wasn’t cheating widows or orphans. This money was the money of speculators, gamblers.”
“Everybody bought on margin, paying only a fraction of the cost.”
“Everybody [was] selling short.”1
Only much later did he start to perceive the underlying cause of his bad behavior—a profound deficiency in character. “I cannot explain my perversity,” he reflected. “I did not feel guilty, only uncomfortable that a grand jury charged me. . . . I was not chastened, only irritated that the U.S. attorney kept annoying me.”2 Even on his way to prison, Harry merely described his criminality in terms of his failure to outrun, outmaneuver, or outsmart the law.
We humans weren’t always such weaklings. Originally endowed with stately powers and well-balanced minds, our first parents were perfect in all their appointments. Through repeated disobedience their powers waned, however, and selfishness and pleasure-seeking ruled over them. This is still our condition today. Of ourselves we can’t escape the pit into which we have fallen. Ellen White wrote:
“Education, culture, the exercise of the will, human effort, all have their proper sphere, but here they are powerless. They may produce an outward correctness of behaviour, but they cannot change the heart; they cannot purify the springs of life. There must be a power working from within, a new life from above, before men can be changed from sin to holiness.”3
Overthrowing the Citadels
To mourn is to feel a deep sorrow for a profound loss. During moments of heightened lucidity, we come to see ourselves as we truly are—not the stalwart, immovable saints we have painted ourselves to be, but vacillating, deluded, and deluding moral weaklings! 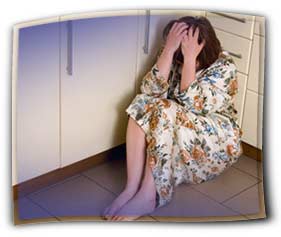 We may describe this kind of mourning as essentially spiritual, with little or nothing to do with misfortune in our temporal lives. It’s when we perceive our unutterable hopelessness that the Holy Spirit points to the risen Christ as our perfect satisfaction, and continues reminding us that Jesus stands as our advocate before God. Then, our great sorrow leads to joy.
First published in 1633, John Donne’s sonnet “Batter My Heart” illustrates this kind of mourning, as Donne urges God to overthrow the citadel of his heart. As yet, he explains, “You . . . but knock, breathe, shine, and seek to mend.” Enough already! I need You to “o’erthrow me,” to “break,” “blow,” and “burn” me into something new.
Peter’s Necessary Anguish
During Jesus’ trial, Peter claimed he didn’t know Him—“I don’t know the man!” (Matt. 26:72). When a servant of the high priest recognized him as having been with Jesus in the garden, Peter flew into a veritable rage and (for the third time that night) denied Jesus.
At just that moment, Peter heard a cock crow and recalled Jesus’ caution that Peter would deny Him three times (Mark 14:30). With curses still fresh on his lips, and the shrill crowing of the rooster still resounding in his ears, Peter watched, transfixed, as Jesus turned slowly from the scowling judges to gaze fully on him.
Jesus’ pale, suffering face and compassionate regard pierced Peter’s heart like an arrow, and he remembered how he had bragged that he would happily follow Jesus to prison and death. Though he had claimed to know nothing about Jesus, he realized how well Jesus knew him, “and how accurately He had read his heart, the falseness of which [had been] unknown even to himself.”4
With revulsion Peter realized his own ingratitude and deceitfulness, and as a blasphemous hand raised to strike his Savior’s face, Peter “rushed, heartbroken,” from the scene. Plunging blindly into the darkness, he little cared where his feet carried him. “It was torture to his bleeding heart to know that he had added the heaviest burden to the Saviour’s humiliation and grief. On the very spot where Jesus had poured out His soul in agony to His Father, Peter fell upon his face, and wished that he might die.”5
Peter was obviously one of the pitiful ones Jesus had in mind when He promised comfort to those who mourn. Before his fall, Peter had known Jesus merely as a figurehead. He had loved Jesus as a man, though heaven-sent; now he loved Him as God. Now, at last, after the terrible but necessary trauma of his conversion, Peter was prepared to encourage his brothers.
Need for Continuing Humility
Mourning over our spiritual insufficiency not only is essential to our conversion, but continues to be so throughout our Christian pilgrimage. As we continue to uncover sin lodged within us, we are constantly humbled. But our desperate need for forgiveness drives us back to Christ, where after earnest supplication we again bask in His peace and happiness. Thus, as someone said, “the Christian life is spent in this way, mourning and joy, sorrow and happiness, and the one should lead to the other immediately.”6
But we should be mindful that Christ’s efforts to validate both our sense of unworthiness and our quest for happiness may occasionally require unusual approaches—and helpers. When Suzy, a kindergartner, lost her next-door playmate to leukemia, she casually reported to her family that she had gone to comfort the sorrowing mother. “But what did you say?” asked her parents. “Nothing,” Suzy replied. “I just climbed upon her lap and cried with her.”
__________
1Harry Golden, The Autobiography of Harry Golden: The Right Time (New York: G. P. Putnam’s Sons, 1969), p. 118.
2Ibid., pp. 121, 122.
3Ellen G. White, Steps to Christ, p. 18.
4White, The Desire of Ages, p. 713.
5Ibid.
6David Martyn Lloyd-Jones, Studies in the Sermon on the Mount (Grand Rapids, Mich.: Wm. B. Eerdmans, 1960), p. 60.
________________
Gerald F. Colvin, a retired professor and graduate dean of Southern Adventist University, writes from Ooltewah, Tennessee.