remember when my parents took my brother and sister and me to an outdoor play. Before the program began the emcee invited all the kids up to the dirt stage area. He held up a large, heavy gunnysack and said that he had a surprise for us. Every kid in the audience scrambled from their seats and down the aisles.

The emcee dropped the sack onto the dirt and scratched a large circle around it with a stick. Then he ordered us to take off our shoes and line the perimeter of the circle. “Guess what’s in the sack!” he called.
“Candy!” yelled one kid.
“Nope. Try again.”
“Rocks!”
“Nope.” He let us feel the bag.
“Eeeew, it’s mushy!” screamed the girls.
“Gross!” yelled the boys.
“Mud!” yelled someone.
“Wrong again.”
The emcee reached down and grasped the bottom of the sack and slowly began to tip it up as expectation mounted. Whatever was inside slid toward the opening of the sack. Suddenly with a flourish he snatched the sack away, exposing a heap of the largest bullfrogs I had ever seen. 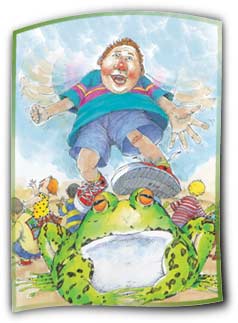