racy, an attractive brunette, sat in Sue’s living room pouring out her disappointment in round salty drops. Sue was her friend from college, and they had shared many joys and tears over the years.

“I thought I did it right,” Tracy sobbed. “I dated only Christian guys with marriage potential. Once I found Mr. Right, we waited for the wedding before becoming involved physically. He seemed like such a godly man.” Then came her bombshell.

“We didn’t even make it to our second anniversary before he cheated on me. Then I found out he was looking at pornography on the internet and has been since he was a teen. I feel like I married a traitor. How many nights has he come home to me after being with her, or looking at countless images, only to give me a Judas kiss? My folks told me we were going too fast. Even you tried to tell me.”

Sue worked with the college girls at her church, and as she listened to Tracy’s story, her mind raced to recent conversations with a girl in her group. Brittany talked about her “Mr. Right” and nothing else.

“He is such a good Christian,” Brittany often said. “I just love to watch him play the guitar with the church worship team. I can SO see myself with this guy.” 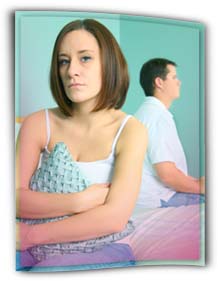 At the next youth meeting, with Tracy’s story fresh in Sue’s mind, she decided to ask Brittany some basic questions. Their conversation went something like this.

“How long have you known Jeff?” Sue asked.

“What makes him a good Christian?”

“He loves to worship the Lord and he likes going to church.”

“What is one fault that you’ve found?”

Brittany looked confused, “Oh, I can’t think of anything. He is everything I prayed for in a guy.”

Sue paused, “What about his family, how do you get along with them?”

“Oh, we hardly see them. We just love being together. Why so many questions, Sue?”

Sue gathered her thoughts before she spoke.“Brittany, it’s great that you’ve found someone special, but now’s the time to really get to know Jeff and his family. If you did get married, it would be a package deal. You would not only get Jeff, but also a mother and father-in-law. Not to mention his siblings and other family members.”

“I never thought about it like that,” Brittany said.

Sue asked, “What will you do when the first real test comes?"

“What kind of test?”

“Brittany, you both will let the other down at some point. Every one of Jesus’ disciples who loved him betrayed Him after his crucifixion.”

Brittany stared at Sue with a puzzled expression. Then she said, “I haven’t really given this relationship enough thought. It’s all been about my feelings and dreams. Thanks for being real. I’m going to have to open my eyes and ask some hard questions.”

Sue decided to see how the other girls felt about finding their future husbands. How many other young women, like Brittany, approached dating with only idealistic notions about marriage? Their search for “Mr. Right” had turned into a search for “Mr. Feel Right.” These dreamy ideas come from movies, romance novels, even fairy-tales — all based in fantasy! Christian women often add the ideal of Jesus on top of these romantic notions, forgetting He was the only perfect Man. And He won’t be found at the altar in a rented tux.

Many young women also envision their future husband, their prince, as a new and improved version of their dad — assuming they had a healthy relationship. If the relationship was poor or damaged, then they choose a “prince” that they think is a polar opposite of Dad.

With these common approaches to finding “Mr. Right” in mind, Sue broached another important subject with the group. She decided to start with a question. “How did you choose where to go to college?”

Emily, one of the quietest girls, spoke first. “My parents have been saving for me to go to college since I was born. It was never ‘if’ I would go, only ‘when.’ I researched different colleges for months with good nursing programs. Then my folks and I visited a couple of my top choices to get a feel for the campus.” 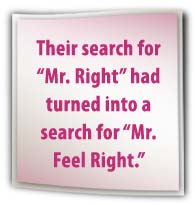 The rest of the girls spelled out similar plans. They all seemed to have taken the time to research colleges and majors carefully. Most of the girls even visited more than one college. They didn’t want to make a mistake. This conversation stood in stark contrast to the ideas expressed about how to find “Mr. Right.”

Sue decided to put together some topics to discuss with the girls over the next few weeks. After researching some of the issues godly men struggle with, she had clear direction for their discussions. The statistics on young men who view pornography were off the charts. It is clear that drug use and oral sex among teens have skyrocketed.  Alcoholism, gambling ... the list of potential traps is a lengthy one. She wondered if young women knew how to set boundaries, appreciate their worth, watch for red flags, and ask difficult questions before they walk down the aisle wearing white.

Sue sought to raise her group’s awareness without creating fear. She reminded them to let God direct every aspect of their life’s journey, keeping in mind, “There’s not one totally good person on earth, not one who is truly pure and sinless” (Ecclesiastes 7:20). Allowing Christ to be their Matchmaker makes the most sense. He will choose the best. Even seemingly strong marriages face trials because we are broken people living in a broken world — a world full of betrayers.

The goal is to be transformed from being like a Judas to a Peter — restored by the hand of Christ. Peter betrayed Jesus just as Judas did, but his repentant heart sought change. He never forgot where he came from. Only when both husband and wife are honest with themselves and with each other can they grow stronger. Their life long goal should be to reflect Christ more each day. Only when God is central can a marriage survive the bumps in the road. “A three-stranded rope isn't easily snapped” (Ecclesiastes 4:12d).

Later, Sue called her friend, Tracy, to see how she was doing. Tracy’s voice sounded stronger as she spoke. “I am happy to report that my husband and I are in counseling. He seems genuinely sorry and willing to work on his issues. I’m not kidding myself, though, about our future. I have decided to take each day as it unfolds trusting the Lord to guide me.”

Tracy responded, “I had to be willing to do my part to heal. Christ has been showing me the ways I’ve enabled my husband to be unhealthy by not recognizing the red flags and setting boundaries.  My counselor helped me to see that I wanted the dream so much that I ignored the truth in front of me -- it’s humbling. I’m not as quick to throw stones at my husband.”


As she hung up, Sue thought she heard a new confidence in Tracy’s voice. She was amazed again at how the Lord works. Next week's conversation with the girls was going to be, “the dream vs. reality.”

____________________
Meg Wilson, a speaker to women's groups, Bible studies, and conferences, is the founder of Healing Hearts Ministry which offers help and hope to women whose husbands are caught in the web of sexual addiction. She also authored the book Hope After Betrayel: Healing When Sexual Addiction Invades Your Marriage (Kregel Publishers). You can visit her website at www.hopeafterbetrayal.com.