’ll never forget the first real friend and protector I had in my life. I was about 7 years old when I found this scraggly, stray dog. He was black and brown, about 15 pounds of bones, skin, and hair. I can’t remember how I found him. Maybe he found me, but from that day on, we were the best of buddies.

Since he was a stray, he didn’t need a leash. He’d lived on the streets long enough to know that if you found someone willing to love and feed you, you stayed right by their side. And that he did in all faithfulness. In fact, he followed me to school, and I’d see him throughout the day, running around the playground, resting under a tree, always ready to accompany me on the walk home. I named him Jessie.
Ready for Anything
Shortly after Jessie came into my life, a family friend’s German shepherd dog attacked him. I remember seeing Jessie with his leg caught in a death grip by this huge beast. Jessie valiantly fought on and finally took a chunk out of the other dog’s shoulder. The shepherd released Jessie, who ran. I followed him, caught up with him, and cradled him in my arms, sobbing as I walked home.
My mom, ever practical, announced that Jessie needed to be “put away.” In my panic and protective love, I fought for his life with all the voice and tears and fury I could muster. Finally she relented and allowed my stepfather to take Jessie to a vet. 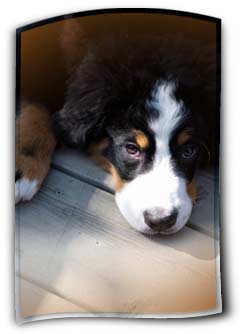 Hours later Jessie was returned to me. I pampered him for the next week as he learned to walk and function with a leg that had been nearly ripped from his hip and was now in a cast. I carried him everywhere, including to his favorite trees. The weeks passed and he healed; and although he still had a limp, he was able once more to come to school with me.
What especially made the bond with Jessie so strong was that he was my protector against the person who was most abusive, my mother. In her rages, she used me as an outlet for her pent-up emotions. Often she came into my room or sought me out in my play to deliver deliberate blows to my head, back, and stomach. Sometimes she used her fists, sometimes her feet, or sometimes she’d send some object flying through the air. Her aim was superb! But all that came to an end after Jessie came into my life.
I will never forget the first time he protected me. I was asleep in my bed when Mother came in one night. Her stinging words awakened me and I braced for her attack. In a flash Jessie was over my body, his teeth bared, his eyes flashing. His snarling growls filled the room louder than her curses. I lay in awe as my mom faced off with my gallant knight.
She reached out to knock him off my bed, but he rushed at her with teeth bared. She immediately backed off with a startled look. She was thwarted! With curses she left the room, slamming the door behind her. Sobbing, I embraced my friend. Not in fear did I cry, but in awe, for that was the first time I’d seen my mom beaten at her own game.
From that time on, my mother and Jessie seemed to have a certain understanding: You stay away from my Jeni, and I will treat you with respect. You try to hurt my Jeni, and I will rip you up.
Faithful to the End
Once Mom came to attack my sister; Jessie came to her rescue, too. In amazement my sister, who had barely held more than a disgusted opinion of my scruffy dog, came to love him also.
I can’t remember how long I had Jessie in my life; perhaps it was a year, maybe a bit less. All I know is that for the first time in my life I began to understand that what my mother was doing to us was not OK. If it were OK, why was my best friend so adamant about preventing it?
One day I came home from school looking for Jessie. He hadn’t been in the schoolyard to walk me home, and I was wondering where he was. I burst through the door with a loud “Jessie, I’m home!”
With a sad look on her face, Mom said, “Jeni, we have some bad news: while you were at school Jessie was hit and killed by a car. I’m sorry. There was nothing we could do to save him.”

“I’m sorry, the body has been taken by the city truck; it’s too late. How about a kitten, Jeni?”
Words cannot describe the anguish I felt in my heart. I sobbed for days and weeks. I never had such a friend again. The beatings soon began again, but for me, I no longer cared what happened to me physically. I now had some inkling that the mistreatment was wrong, and that however unlovable I was told I was, if a dog as fine as Jessie could love me, I knew I could someday be loved again. A tiny flame lingered in my heart that I directly credit with my being able to finally accept the love of God many years later.
Finally, the Truth
More than 20 years later my sister revealed the truth about what happened to Jessie. He hadn’t been killed by a car that day, as I had been told. My mother, in a rage and with a plan in mind, had taken my dear friend to the local vet and had him put down. She stole my angel because to her he was the only thing that kept her from releasing her anger on her children. He was her enemy.
My time with Jessie had been fleeting. But what he taught me will be forever etched in my mind: Jessie was sent into my life by my heavenly Father to give me a glimpse of His unconditional love and trust, and to plant a longing for that in my heart. I will always love that dog, that scroungy, ragamuffin outcast who taught me what a true friend is.
Draw near to God and He will do the rest. He will heal the hurts you didn’t even remember you had. He will raise you up again!
__________
Jennifer E. Layton is a foster parent to medically fragile children. She lives in Reno, Nevada, and writes to raise awareness about physical and emotional abuse.