t was almost festival time. For weeks the people of the prosperous market town had been preparing feasts, floats, and fun-filled phantasms for the enjoyment of all. Committees met in back rooms in the town hall; each group determined that theirs would be the best, most flamboyant attraction of the day’s festivities. If you weren’t on a committee somewhere, something was seriously amiss.

Beth wasn’t on a committee, which proves the point. Beth was never asked to be on committees; she was never asked the time of day. Beth was the town’s number one social outcast. Beth had a terrible skin disease that everyone had been told was highly contagious. So when they saw Beth coming people generally gave her lots of room.
Despite her lonely isolation, Beth managed to find out about many of the plans going forward, and in a detached sort of way she began to enjoy the preparations, even though she knew she would have to view them from a distance—probably a great distance.
Then one day while eavesdropping outside the open window of the smallest office of the town hall, she heard that people were going to wear fancy dress costumes to the festival. Costumes! Why hadn’t she thought of that? If she had a costume, she could mingle with others to her heart’s content. She went home to plan the most cunning costume ever worn. She didn’t know if there would be a prize for the best costume, but if there was, she intended to win it.
Working the Plan
The day of the festival arrived. Floats wended their way through the high street. People laughed, cheered, and waved flags and rainbow streamers. People wore costumes of brown bears, prancing horses, and six-foot-tall rabbits, and mice mingled with the masses, and no one thought it the least bit odd when a scarlet and gold dragon sauntered up beside them. Some even patted Beth on her huge black nose from which she blew smoke every now and then from a contraption she had conjured up in the garden shed. 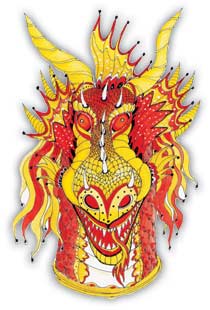 Beth was enjoying herself more than she had for years. She could feel the hands of small children tugging playfully at the costume’s gold tassels. Her superbly spiked tail flowed along behind her, and tiny bells on her shoes and golden mittens tingled prettily to show that though fearsome to see, she was a friendly dragon.
Then, in one of those pauses that happen even during the happiest of events, Beth heard something that brought her back to reality with a bit of a thud.
“The Healer is here,” she heard a woman say. “My daughter just told me.”
“What, in our little town?” replied her companion in tones of disbelief.
“Yes, in the market square.”
“Can He really heal people?” the companion asked.
Beth watched as the first woman nodded vigorously. “You know that man we often see in a wheelchair? Well, he’s not in a wheelchair now! He met the Healer.”
Beth waited to hear no more. She was on her way to the market square as fast as her bell-bedizened feet could jingle.
When she arrived she saw crowds of people flocking around a tall Man standing on the steps of the market. There were people in wheelchairs, on crutches, or stretchers. One by one as they were brought before the Man, He talked quietly to them and they got out of their wheelchairs, dropped their crutches, and rose from their stretchers.
Oh, to Get Close Enough
So it was true: the Healer really could heal people! Yet Beth had a problem, so she stood eyeing the Man through the slits in her dragon’s eyes, chewing her bottom lip in concentrated thought, her little smoke puffer quite forgotten.
If she unmasked herself before all these people, she would be thrust aside by the crowd. And even if she did manage to get near, the Healer would probably be just as repulsed by her appearance as was everyone else.
She looked around at those being healed. There was no one with a skin condition like hers. Maybe the Healer couldn’t do anything for her sort of problem.
Beth started to leave the square, then she stopped. To be so near . . .
She started to take off her dragon’s head but stopped again, dreading exposure to the crowd’s revulsion—and probable rejection by the Healer as well. Maybe if she got very near before revealing her condition . . .
She started to edge her way through the crowd, which wasn’t easy with tinkling bells and her beautiful dragon’s head and tail, until she was standing a few feet from the Healer. Then the miraculous happened. The Healer looked up from a child He was talking to and His eyes met the eyes of the one behind the dragon’s mask. Suddenly He laughed; a rich, low chuckle. His pleasure was obvious, and everyone turned â€¨to see the cause of it. Suddenly everyone was smiling and patting the dragon. Beth felt great. Then to her horror, before she had time to whip off her mask (she’d been a bit slow because she’d been enjoying the fuss the people made over her) the Healer turned away, still smiling, to the next sick person who had been laid at His feet.
Too Late?
Inside the dragon’s head Beth’s smile faded, and outside she was being elbowed away to make room for those who needed healing.
But I need healing! she cried to herself. Let me get back to the Healer.
She tried, but someone said: “OK, you’ve had your fun, we’ve got serious business here, make way.” In the end she was pushed farther and farther away until she was no longer even in the market square. Defeated, she slunk down a narrow side street, her gorgeous dragon’s head drooping miserably.
She couldn’t stand it; not after being so close. She’d never have another chance like that, and she’d blown it. For a few minutes of glory she had lost the chance of being healed. Why hadn’t she just whipped off her dragon’s head as she’d intended?

Even as she asked herself the question, she knew the answer. She hadn’t been able to face the Healer as she really was. If only she’d been able to talk to Him, explain her problem with the mask on.

Beth sank down on the steps of a grubby little shop and took off the glorious head. Hot tears burned their way over the scabs and scars of her marred face, and her gorgeous dragon’s back hunched as she gave way to her grief.
Then she became dimly aware that the noise and bustle of the market place had died down and she could hear the crowd dispersing. She’d stood just feet away from the Healer. But what chance did she have now? Her renewed sobs filled the narrow street.
Suddenly she felt a hand resting gently on her shoulder, and without thinking of the exposure of her terrible face, she lifted her head, and found herself looking into the eyes of the Healer.
“I couldn’t help you in the square,” the Healer said. “You were too busy hiding your condition.”
Then the Healer did something no one had done for years. He touched Beth’s face. At first Beth could hardly feel His fingers running lightly over the awful bumps and blotches of her skin. But suddenly she felt His cool fingertips gliding over smooth, clean flesh, and Beth knew a miracle had happened.
“I didn’t come to help those who like to appear well, but to those who know they are sick,” the Healer said. “Anyone who comes to Me I never send away unhealed.”
__________
Anita Marshall, an avid gardener, is part of the editorial team at The Stanborough Press in Lincolnshire, England.