n the Fisherman’s Wharf area of San Francisco, there is a street performer, in the loosest definition of that term, who crouches on a small wooden box at the curb of a sidewalk, hiding behind a carefully-constructed screen of leaves and branches. When unsuspecting tourists stroll within close range, he suddenly throws the foliage aside and growls, “Aaargh!”

Women scream, children jump, grown men drop their cappuccinos—and everyone within half a city block, many of them previous victims of this little drama, laughs delightedly.
Then he thrusts forward a rusting coffee can, and many passersby who have just had the living daylights scared out of them dig into their purses and pockets and make a contribution to the support of this unique art form.
The guy on that curb is only a small-time reminder that our culture has an interesting relationship with fear.
On some level, fear fascinates and amuses us, and this is reflected in the media that draw literally millions of viewers and readers each year. Fictional characters from Dracula to Freddy Krueger, from Norman Bates to Leatherface, from Frankenstein’s monster to Hannibal Lechter, forever seem to lurk in our collective imagination. We know of these characters whether or not we’ve read any of the books from which they’ve come—or seen any of the films, many of which are listed by the Library of Congress as “culturally, historically, or aesthetically significant” in its National Film Registry. 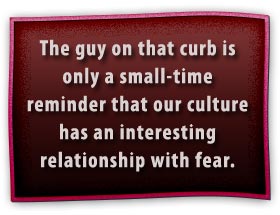 Somewhat like the man behind the foliage on the San Francisco street but on a much grander demographic scale, Stephen King alone seems to raise the fear level of our entire culture by almost annual injections from a remarkable corpus of films, short stories, and novels. In 2003 King received The National Book Foundation’s Medal for Distinguished Contribution to American Letters. In this way society seems to judge his contribution to public discourse as considerably more significant than mere escapism.
One of the more specific expressions of our culture’s fascination with fear is reflected in the frequent depiction of apocalyptic and post-apocalyptic themes.
There is an abiding interest in end times: Where is human history headed, and then what? Former and current examples in no particular order: The Terminator series and End of Days (both featuring the performer who once frightened audiences worldwide but who now has elected to terrorize only Californians), The Matrix series, I Am Legend, the Planet of the Apes series, Stephen King’s The Stand, and a host of others.
The Onion, a satirical online and print publication that facetiously touts itself as “American’s finest new source,” takes an occasional tongue-in-cheek look at end times. In 2006 it “reported” in an article entitled, “Majority of Americans Unprepared for Apocalypse,” an imaginary survey by the so-called Malthusian Institute.1 “Few citizens have bothered to equip themselves,” says the director of this fictional institute, “with fireproof suits and extinguishers to deal with volcanic upheaval, solar flares, or the Lord’s purifying flame.”2
In the great majority of the apocalyptic representations in our current culture, the end comes as a natural result. Humanity faces extinction from nuclear holocaust, a pandemic plague, or extraterrestrial invasion. There is seldom, if any, involvement of the supernatural.
Most of today’s readers and viewers would probably find it surprising that this interest in end times may be considered remarkable at all. Since the close of World War II, with its introduction to the atomic bomb, end times have become so pervasive a theme that it’s taken for granted.
But the Western mind hasn’t always been so concerned with the end of the world. Two or three centuries ago, when thinkers were thoroughly absorbed with the idea that humankind would be able to solve any challenge that may come along, the few attempts to address end times were judged to be fringe thinking in the literary world. Even in most current cases, media explorations of the end times conclude with some kind of triumph of humanity’s creativity and resolve over the possible end of the world. 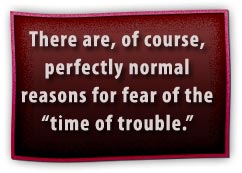 And against this backdrop, there is still the vastly underrepresented supernatural biblical view of the apocalypse: the return of Jesus Christ. To the Christian, this is the great hope: that Jesus will return to usher in an eternity of happiness.
But even for Christians, there is still the daunting belief that the Second Coming will be preceded by the “time of trouble” and followed by individual judgment for all of humanity. Here is where even many Christians feel their own unique fear of end times—and probably why the scenario depicted in Left Behind (the book series and the film) bring at least some misdirected comfort. It suggests a way in which God’s people will be spared the pain of both the “time of trouble” and the ultimate destruction of this sinful world.
Too many Christians, though, still express fear of the end times. They read of the beast of Revelation 13, for instance, who according to prophecy, will “make war with the saints” (verse 7, NKJV) and all the suffering that that may entail. The coming of heaven all sounds well enough, with its eternal peace and prosperity, but the troubled pathway between here and there not so much!
A Seventh-day Adventist theologian once took a survey among students on an Adventist university campus at the beginning of a course on last-day events: 56 percent were frightened of the end times; 41 percent reported that they would rather die than go through last-day events.3
There are, of course, perfectly normal reasons for fear of the “time of trouble.” And there is nothing inherently wrong with fear. In a world of sin, it is a natural response to potential threat of any kind.
But over and over in Scripture, the God of grace encourages His followers that we need not fear anything because He is with us. In Following Jesus in a Culture of Fear, Scott Bader-Saye sketches the regularity with which God’s reassurance appears throughout Scripture: “ ‘God is our refuge and strength, a very present help in trouble. Therefore we will not fear’ (Ps. 46:1, 2). ‘Do not fear’ is the message of Moses to the people of Israel (Deut. 31:6), of Isaiah to a destroyed Jerusalem (Isa. 40:9), of the angel Gabriel to Mary (Luke 1:30), of Jesus to Paul (Acts 18:9), and of Jesus to John on the island of Patmos (Rev. 1:17).”4
Even more comfortingly, God has said to us: “ ‘Never will I leave you; never will I forsake you’ ” (Heb. 13:5, NIV). This is a promise that would certainly apply even to the end times. It should provide a basis for reassurance that they need not scare the living daylights out of us.