n the Word of God . . . we possess a spiritual guide and instructor. . . . If the teachings of this Word were made the controlling influence in our lives, if mind and heart were brought under its restraining power, the evils that now exist in churches and families would find no place. Upon converted households the purest blessings would descend, and from these households an influence would go forth that would make them a power on the side of truth and righteousness.

The work of reformation that is needed must begin in the home. There rests upon parents the most solemn obligation to train their children in the fear and love of God. . . . The teachings of the Word of God are to control mind and heart, that the home life may demonstrate the power of the grace of God. Each member of the family is to be “polished after the similitude of a palace” by the divine principles and precepts.
Parents need to awake from their deathlike slumber, and no longer neglect the Lord’s instructions. . . . [F]or the benefit of those with whom they may be associated, their characters are to be cast in a Christlike mold. Their course of action is to be a constant declaration that . . . they have put on the image of the heavenly.
A Guidebook for Living
In the Bible the will of God is revealed. Through all time this book is to stand as a revelation of Jehovah. . . . The truths of the Word of God are not mere sentiment, but the utterances of the Most High. He who makes these truths a part of his life becomes in every sense a new creature. He is not given new mental powers, but the darkness that through ignorance and sin [had] clouded the understanding, is removed. 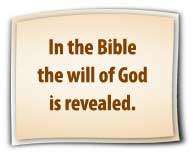 The words, “A new heart will I give you,” mean, A new mind will I give you. This change of heart is always attended by a clear conception of Christian duty, an understanding of truth. The clearness of our views of truth will be proportionate to our understanding of the Word of God. He who gives the Scriptures close, prayerful attention will gain clear comprehension and sound judgment. . . .
The Word of God, studied and obeyed as it should be, will give light and knowledge. Its perusal will strengthen the understanding. By contact with the purest, most lofty truths, the mind will be enlarged, the taste refined.
History Revealed
We are dependent on the Bible for a knowledge of the early history of our world, of the creation of man, and of his fall. Remove the Word of God, and what can we expect but to be left to fables and conjectures. . . . We need the authentic history of the origin of the earth, of the fall of Lucifer, and of the introduction of sin into the world. Without the Bible, we should be bewildered by false theories. . . . But, having in our possession an authentic history of the beginning of the world, we need not hamper ourselves with human conjectures and unreliable theories.
Wherever Christians are, they may hold communion with God. . . . Their minds may be strengthened, even as Daniel’s was. God gave him “knowledge and skill in all learning and wisdom” [Dan. 1:17, KJV]. Among all the youth examined by Nebuchadnezzar, there was found none like Daniel, Hananiah, Mishael, and Azariah. . . . And in all matters of wisdom and understanding that the king inquired of them, he found them ten times better than all the magicians and astrologers that were in all his realm.
. . . Daniel and his companions, from the first of their experience in the king’s court, were gaining a clearer comprehension and sounder, more accurate judgment, than all the wise men in the kingdom of Babylon. They placed themselves where God could bless them. They ate only that food which would not becloud their minds. They followed rules of life which would help to give them strength of intellect. . . .
It was to Daniel that Nebuchadnezzar . . . turned for an account of his forgotten dream, and for an interpretation of it. Daniel and his companions sought the Lord in prayer, and he revealed to them the dream and its interpretation. And when they related to the king what God had shown them, Nebuchadnezzar said, “Of a truth it is, that your God is a God of gods, and a Lord of kings, and a revealer of secrets . . .” [2:47, KJV].
“Think on These Things”
The mind of which error has once taken possession can never expand freely to after-investigation. . . . The understanding of things that are true and elevated and sanctifying will be confused. . . . Christian knowledge bears its own stamp of unmeasured superiority in all that concerns the preparation for the future, immortal life. It distinguishes the Bible reader and believer, who has been receiving the precious treasures of truth, from the skeptic and the believer in pagan philosophy.
Cleave to the word, “It is written.” . . .
The reading of the Scriptures causes light to shine  into the darkness. As the Word of God is searched, life-giving truths are found.
In the cities and nations of our world, there will be found among unbelievers a remnant who will appreciate the blessed Word, and who will receive the Saviour. Christ will give men and women power to become the sons and daughters of God.
__________
This article is excerpted from one that appeared in The Advent Review and Sabbath Herald, now the Adventist Review, NOVEMBER 10, 1904. Seventh-day Adventists believe that Ellen G. White exercised the biblical gift of prophecy during more than 70 years of public ministry.