RECENTLY READ THREE VERSES THAT CLOBBERED ME: “NOW THERE AROSE up a new king over Egypt, which knew not Joseph. And he said unto his people, Behold, the people of the children of Israel are more and mightier than we: Come on, let us deal wisely with them; lest they multiply, and it come to pass, that, when there falleth out any war, they join also unto our enemies, and fight against us, and so get them up out of the land” (Ex. 1:8-10, KJV).

Clobbered, because here is the first time history records this infernal theme: the Jews among us are the enemies and we can’t trust them, a motif that has echoed through the centuries and, indeed, has implications for Seventh-day Adventists as well. 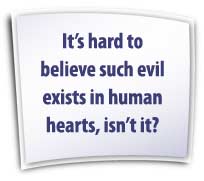 More than 1,200 years before Christ, Pharaoh started a trend that has endured through the millennia. From causing the plagues in medieval Europe by poisoning the wells, to purposely infecting babies in Chicago with the AIDS virus, Jews have been blamed for a host of evils. In fifteenth-century Spain, blamed for bringing the displeasure of God upon the nation, Jews were expelled, their property confiscated (which some believe was the real cause of the expulsion); in twentieth-century Russia, seen as pawns of the American government, Jews were arrested and executed in what Stalin believed was a Jewish doctor’s plot to kill off the communist leadership. Meanwhile, in the West, how often was the phrase “Jew-Bolshevik” thrown around? When Japan struggled economically in the 1980s, books off Japanese presses blamed the nation’s woes on Jews. In medieval Europe Jews were accused of murdering children and mixing their blood with Passover matzos, an accusation that led to riots and persecution—and which was heard even in the twentieth century (in New Jersey!).
Having fought valiantly and patriotically for the Kaiser in World War I, many Jews believed that Germany would, once and for all, accept its Jewish citizens as the loyal Germans they had for centuries believed themselves to be. Wrong.
Recently, I told someone I was going to Mumbai (I jokingly said that if they killed me—a Jew, a Christian, and an American—they’d get a triple bagger), only to have him tell me that Jews were behind the Mumbai massacre. In fact, he said, no Islamic terrorists hijacked the 9/11 jets; the planes were, instead, rammed into the Twin Towers (which themselves were booby trapped on the inside) through remote control devices planted on the planes by (you guessed it) the Jews! Jewish bankers, he explained too, put Hitler into power, and when I queried as to why the Jews would support someone who had stated his desire to kill them, he told me that the Holocaust never happened, but was a Jewish deception designed to create the state of Israel.
It’s hard to believe such evil exists in human hearts, isn’t it? And the sad thing is, the infernal theme will continue until the end of the world. How not? When the seventh-day Sabbath—the “Jewish” Sabbath—becomes the focal point of controversy, won’t the Jews, even those who never kept the Sabbath a day in their lives, be tragically thrown into the mix with us?
Notice the phrase “with us” (me—I’m going to get it from both ends), for Adventists mustn’t forget Ellen White’s words: “It will be declared that men [and women] are offending God by the violation of the Sunday sabbath; that this sin has brought calamities which will not cease until Sunday observance shall be strictly enforced; and that those who present the claims of the fourth commandment, thus destroying reverence for Sunday, are troublers of the people, preventing their restoration to divine favor and temporal prosperity” (The Great Controversy, p. 590). “Those who honor the Bible Sabbath will be denounced as enemies of law and order, as breaking down the moral restraints of society, causing anarchy and corruption, and calling down the judgments of God upon the earth” (ibid., p. 592).
Adventists will be blamed for things they never did.
Just like the Jews.
_____________
Clifford Goldstein is editor of the Adult Sabbath School Bible Study Guide.

Letters
Inbox
Guns or Roses? | My Favorite Edition | The Christian’s Call to Civil Disobedience | God Speaks Through Introverts Too
Magazine Article
Following the Prince of Peace in a Time of War
Dealing with war isn’t new for the Adventist Church.