Waiting to Be Invited

I turned to see the smiling face of Diana Aparicio, one of the young people who had graduated from our academy in Wenatchee, Washington, when I pastored there.

“Well hi, Diana. I haven’t seen you in a long time. How are you doing?” I asked as I held my tray in the cafeteria at Walla Walla University.
“I’ll graduate in March with a degree in International Business.”
“Wow! I’m sure proud of you,” I said. “What do you plan to do after you finish?”
“I’d like to work for the church, maybe for ADRA,” she said.
“Your International Business degree, and the fact that you’re bilingual, could really help you with something like that,” I responded. I remembered how Diana had been a leader in academy and participated in mission trips. But through the years, each time she was asked if she was ready to be baptized and join the Seventh-day Adventist Church her response was always the same: she’d smile and say, “No thanks; I’m Catholic.” 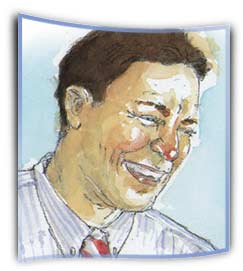 Now, as I stood with my food tray in the cafeteria, she was telling me she wanted to work for the Seventh-day Adventist Church. “By the way, Diana,” I asked, “have you ever been baptized and joined the Adventist Church?”
“No.”
“Is there anything that would make it difficult for you to be baptized and join the church?”
“No.”
“Great! Let’s plan on it soon,” I offered, half in jest.
“OK,” she said.
“Are you serious?” I asked.
“Yes.”
“Then let’s go for it!” I said. “I could baptize you, or I could arrange for someone else to do it.”
“I’d like you to,” she said.
“Would October 29 work? That’s three and a half weeks away.”
“Sure.”
“Awesome! I finish my meetings here this afternoon at 5:30. Let’s visit for about an hour this evening to be sure we’re all ready for this. Can my friend Tom and I meet you in the lobby of your dorm?”
“Sure,” she answered. I could hear enthusiasm building in Diana’s voice as she realized she was about to make one of the most important decisions of her life.
A Tale of Two Churches
That evening we had a wonderful Bible study, reviewing the Bible’s major truths and filling in the answers to her questions. We talked about what it means to be a Seventh-day Adventist living in the last days of earth’s history, and what we hoped for her first six months as a new member of a rapidly growing worldwide family.
At the end of the hour she was clear about what she was committing to, and I was clear that she understood the privileges and responsibilities of joining the Advent movement.
“Let’s each pray before Tom and I head back to Portland,” I suggested. “Diana, why don’t you pray first, then I’ll pray, and Tom, would you close?”
Diana began, “Lord, You know how I promised not to miss any more chapels . . .” I tried to keep from laughing as I remembered some of my own college struggles many years ago. She continued: “But You know how I was impressed to go to the cafeteria today so I could run into Pastor Dan and get ready for baptism . . .” It was a simple, beautiful prayer from the heart of a young woman who was determined to do what she believed Jesus wanted her to do.

Diana decided to be baptized at the Walla Walla University church, where she had many positive influences over the last few years. She also requested that her church membership be in the Wenatchee Seventh-day Adventist Church, where her family lives.

On Sabbath, October 29, Diana shared her testimony from the baptistery of the university church, while the Wenatchee congregation watched via an Internet audio/video feed. As soon as she was baptized the voice of Mike Aufderhar, pastor of the Wenatchee church, came over the university church sound system congratulating her. Then he and the Wenatchee congregation voted her into church membership. Terry Mace, Wenatchee’s first elder, had come to Walla Walla to present Diana with a gift basket from her home church earlier that morning.
Following her baptism many of her friends and new brothers and sisters wished her the best in her new walk with Jesus, including several families from Wenatchee who were in Walla Walla for Parents’ Weekend. Also present was her former principal, Doug Brown, who had come all the way from Lodi, California, to witness the answer to many years of prayer.
Ellen White wrote: “There are many who are reading the Scriptures who cannot understand their true import. All over the world men and women are looking wistfully to heaven. Prayers and tears and inquiries go up from souls longing for light, for grace, for the Holy Spirit. Many are on the verge of the kingdom, waiting only to be gathered in” (The Acts of the Apostles, p. 109).
Maybe you and I can help individuals around us make their decision for Jesus. All it takes is an invitation.
___________
Dan Serns is ministerial director of the North Pacific Union Conference. He lives in Vancouver, Washington.