recognized her voice immediately.What wintry morning, my daughter, Katrina, and I were giving my husband, Martin, a break from cooking Sunday breakfast. We had chosen a local McDonald’s because of its indoor play center.

As I poured syrup on my pancakes, a family of four sat down nearby, and their boy and girl joined Katrina on the playground equipment.
When I heard the wife speak to her husband, I stopped pouring and stared. My high school classmates had been on my mind lately as I anticipated my 20-year reunion at Spring Valley Academy (Centerville, Ohio). I know this woman, I thought.
If she was who I thought she was, she joined our class in seventh grade. Throughout high school we shared conversations, played basketball, and took driver’s education together. After graduation, we lost track of each other.
Intersections
My voice shook a little as I approached to confirm her identity. Yes, it was Kelly. Her husband, Rick, was anticipating a work transfer, and our town, Huntsville, was one area the family was considering moving to. 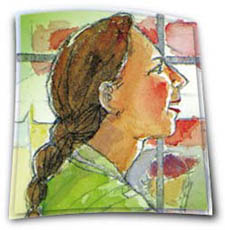 As we talked, we became convinced our meeting was no coincidence. Rick had chosen this particular road, saying, “Let’s just see where this takes us.” They drove past the McDonald’s since the children had just eaten, but turned around because of the indoor play center.
That morning I had knelt in prayer. I couldn’t claim the title “prayer warrior,” but lately God had been nudging me to begin each day by physically kneeling and spending time talking with Him.
When Martin began his new job in Huntsville, I stayed in Ohio for a month to sell our home and pack our possessions. One night, wanting to escape from our cardboard castle, I searched our library for inspiration. I chose The Door in the Wall, a book I had not read since elementary school.
In this Newbery Award-winning book, Marguerite de Angeli shares the story of a disabled boy, Robin, caught in the turbulent events of the Scottish wars. I opened the book and was surprised to see a Scripture printed as the dedication:
“I know thy works:
Behold, I have set before thee an
open door, and no man can
shut it:
For thou hast a little strength, . . .
and hast not denied my name”
Rev. 3:8, KJV).
I read the book that night, but not before I read all of Revelation 3. I began to write verse 8 on my heart.
The Good Times
Kelly and I shared our frustrations with moving. We both moved to Huntsville in the summer, when the heat and humidity made me crave the snows of an Ohio winter. Our senior year, Kelly and I attended a Bible retreat in northern Ohio. Early Sabbath morning, we took a walk, and as snowflakes melted on our faces, we observed several deer bound across the path. It rarely snows in Huntsville, but Kelly bought a house with an outdoor pool, where our families created fun despite the heat.
While unpacking boxes, Kelly found some pictures of our 1980 graduation. We laughed as we remembered how two classmates had decorated the principal’s home with toilet paper after class night. The next morning, during the graduation ceremony, they received only a sheet of toilet paper in their diploma holders. 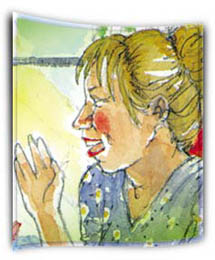 I hated to admit it, but our conversations stirred up more bittersweet memories. There was the “egghead” label I earned through my love of books and studious nature. There was the ex-boyfriend scenario. There was the unity of our junior year, and the cliques of our senior year.
Several months later I climbed the attic stairs and flipped through the pages of my senior yearbook. I found a photograph of Kelly, ice-skating with another friend and me. I sat in silent sorrow, thinking of missed opportunities, and the classmate we lost to death not 10 years after graduation. I smiled at the photograph of a full parking lot, with signatures scrawled over each owner’s car. I laughed outright at my entry for “Secret ambition” in the acronym S-E-N-I-O-R-S: “to be a jockey and race a thoroughbred.”
After 20 years I still wanted to believe some of the overly sweet, exaggerated autographs. I realized that even with a small class of 26, I didn’t know every member. One entry was not signed, but I knew who wrote it. It was from my closest friend that year, but lifestyle choices after graduation created walls between us. Even in my interactions with Kelly, I saw how our lives had taken different paths from those we followed in high school.
Another Reunion
My class reunion was a natural subject for my prayer closet. My meeting with Kelly at McDonald’s convinced me to devote some part of each day to prayer. I found God’s protecting presence even in a closet stuffed with earthly things. I experienced His incredible peace. I also found God demands a toll for our relationship: honesty.
Honesty told me I couldn’t change the past; but I shouldn’t miss this opportunity to influence the future. In renewing Kelly’s friendship, I learned that shared experiences in the present give us courage to expose ourselves to the past. Honesty said the open doors were God’s, not mine.
I found a Scripture example in Luke 24, in which Jesus was reunited with His disciples after His resurrection. Jesus met with His disciples that very night. He did not even stop to eat. Jesus could not wait to see His friends—James and John, who once cared only for a position in His kingdom; Peter, whose words had pierced His heart. Jesus hurried to see them!
And the disciples met Jesus with a timeless reunion phrase: “I don’t believe it’s you!” In their fear, had they forgotten what they had learned during their shared experiences with Jesus before the crucifixion and during the chaotic events that had separated them?
As Jesus ate with them and shared His scars, the disciples’ fears and their pain from the days of separation turned to joy. They began to look to their future. Jesus told them to act on their joy, to go forth as His witnesses. They returned to their city with “great joy,” blessing God continually.
At our reunions there will always be the unbelievers, the no-shows, the gossips, and the ladder-climbers. There will also be opportunities to heal the past and act together for the future—to go forth as witnesses of God’s love.
I praise God that there will be one final reunion that will not allow any doubting disciples. And nothing—not bitterness, sorrow, poverty, illness, anger, a bad hair day, gossip, mistakes, pride, family strife—will keep us from the joy we will experience for eternity.
In the meantime, I’ll return to my city rejoicing, and with renewed strength continue to proclaim His name.