n 1933 the Great Depression brought hardship to all in South Africa. A. N. Ingle, president of the Natal-Transvaal Conference, gazed thoughtfully at the man he had called into his office. Phillip A. Venter spoke mostly Afrikaans, and spoke English with difficulty. Up to now he had been instructed to do evangelism in English, which was the policy at the time.

Ingle spoke. “Phil, my old friend, for years you have been nagging us to conduct evangelism in Afrikaans. The committee agreed that you may hold such meetings in Northern Transvaal, where most of the people speak Afrikaans. However, there are no funds, so do what you can.”
“God will provide what we need,” Venter replied.
“God be with you,” Ingle said. “Here’s a five pound loan for expenses; pay me back when you can.”
The Adventure Begins
Phillip and his wife, Susie, purchased a Folding Caravan (trailer) for a reasonable price. This would be their home for several years. One of Phillip’s earlier converts gave Susie a small, portable organ, and with their few possessions they headed north to Potgietersrust. 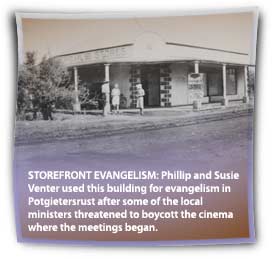 On their arrival they parked the caravan on a vacant lot. Phillip approached the owner of the local cinema, who let them use the hall for a low rental fee. For advertising, Phillip displayed his only hand-painted advertisement with the words “Bible Lectures” in front of the cinema.
On opening night the hall was full. Susie led the singing at the organ, then slipped away to operate the old “magic lantern” (a projector powered by mixing carbide and water). The meager collection taken during the course of each evening’s meeting barely covered the rental of the hall.
A butcher and baker, Gert van Niekerk, and his son-in-law usually went after work every evening for a “quick one” at the bar in town. On the way they noticed the banner outside the cinema. They decided to go in and listen for a while, and go to the bar afterward. They were so interested in what they heard that they stayed for the entire lecture, and by then the bar was closed. Each subsequent evening they followed the same pattern.
When Phillip went to the bakery to buy bread, Gert recognized him and said, “As long as you’re here, I’ll give you a loaf of bread every morning, free of charge.” Soon a choice cut of meat accompanied the bread, with a smaller parcel for Susie’s dog, Spotty.
Prior to the Venters’ arrival, a colporteur had arrived at the van Niekerk home in the middle of a pouring rainstorm and tried to sell the butcher’s wife, Annie, a copy of Ellen White’s book The Desire of Ages. Gert arrived home right in the middle of the salesman’s canvass. On discovering what the colporteur was doing, Gert hustled him out into the rain and locked the door. Annie, however, motioned through the window for the colporteur to come back later. He returned when Gert was away and sold Annie the book.
Soon Annie began reading a portion of the book to Gert each evening, which he found very interesting. When he noticed that the lectures agreed with the book, he told his wife about the meetings and she began attending with him. Their four younger children, three sons and a daughter, were strictly forbidden to attend—just in case of heresy. An older daughter was already married. 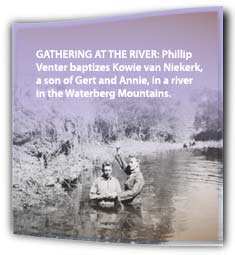 Some folk began making their decisions to follow the Adventist message. Ministers of some of the other churches became alarmed. They threatened to boycott the cinema if the meetings continued there. Phillip quickly had to find another meeting place.
Phillip found a vacant store for rent. The carport at the back was just right for parking the caravan, and an extra room in the store could be used as a kitchen/dining room. This was needed because winter was approaching. The hall was spacious, but there was nowhere to sit. At the next meeting everyone sat on rugs and cushions on the floor. The manager of a local peanut butter factory donated a number of large, empty peanut butter cans. Phillip obtained a pile of boards from Gert and placed them over the cans for seating. Later, Phillip made benches from the boards and returned the cans. As people began keeping the Sabbath they needed a place of worship, so the store served as a church as well as a meeting hall.
Decision Time
Gert began discussing his decision to be baptized with Annie. One of their sons slept on a bed on the front porch beneath his parents’ bedroom window, and at night he could hear them discussing the lectures. Gert began praying about how he would tell his children of his decision.
One morning their four younger children lined up in front of them. The eldest said, “Dad, Mom, I want to be baptized too.” The rest chimed in, “Me, too! Me, too! Me, too!” They admitted that while their parents sat in the front of the hall, they had sneaked into the back seats to listen. They also revealed that while their parents were in the adult Sabbath school, they had attended Susie’s children’s classes. What’s more, they preferred Susie’s Sabbath school to Sunday school. Gert gladly admitted that while he had been praying for wisdom to teach them the message, God had already done it His own way.
Gert became convinced that smoking was wrong. He never carried tobacco on him, but he kept it in his shop, his car, and in all the rooms of his house. One day he went from room to room, filling a box with all his tobacco, cigarettes, and pipes. With a fire burning in the big oven of the bakery he threw the box into the fire. Old Sam, his employee, saw this and tried to scrape it out. But ashes were all that remained.
“Oh, Boss,” he mourned, “how many months I could have had enough smokes, and now it’s all burned to ashes!”
“Sam,” Gert replied, “what’s not good for me isn’t good for you either.”
After some thought, Gert became convinced that he had to close his business on Saturdays. Notices placed at both doors stated: “This business will be closed from sunset on Fridays to sunset on Saturdays.”
When a Jewish competitor saw what he had done, he said to Gert, “Sir, you’ll go bankrupt. I’m a Jew and I cannot do what you’re doing.” Then weeping he said, “You’re a better man than I am.” A few months later the Jewish butcher went bankrupt.
Gert then obtained permission from the attorney general in Pretoria to open his business on Saturday nights and Sundays. In those days it was generally not permitted in South Africa, but after his explanation a permit was granted.
Soon afterward Gert and his family helped Phillip find a suitable spot for baptism in the river among the Waterberg Mountains. They dug into the riverbed until the water was deep enough. Gert and Annie, together with a large number of others who had given their hearts to the Lord, were baptized. All of their five children were baptized as well. Their son-in-law was baptized 50 years later.
Phillip and Susie Venter left Potgietersrust and went on to establish congregations in several other of the larger towns of the region, congregations that are still in existence. Phillip also repaid the five pound loan to the president.
Epilogue
In 1980, while studying at the theological seminary at Helderberg College, I listened as Venter’s son, P. A. Venter, Jr., told this fascinating story to the students. I realized that he was talking about my grandparents Gert and Annie. I thank God for Phil and Susie Venter. In this telling I have been able to fill in a few details told by my parents (of which P. A. Venter, Jr., attending college at the time, was unaware).
In November 1985 I married Adria, Phillip Venter’s granddaughter. The previous February I visited Adria and her parents in Cape Town. We had gone to beard the lion in his den. In the passageway I stole a kiss from Adria. Granny Susie, bedridden at age 93, lived with her son, Phillip Venter, Jr. She saw us through a crack in the door of her bedroom. When my eye caught hers, she quickly looked away. There was a knowing smile on her lips, though she pretended that nothing had happened.
With this in mind, as well as our calling to ministry from on high, Adria and I rejoice in the joy of having the privilege to continue the proclamation of this wonderful message of Jesus as the only way of salvation.
Today Jesus is willing to pour out His Spirit on us just as freely as He did back then. We may question some of our experiences and difficulties, but if we accept Jesus as the only way in our lives, we would not desire it any other way when we reach the end of our journey.
__________________
Gerhard Van Niekerk is a pastor, leading the Welkom and Virginia congregations in the Kwazulu Natal-Free State Conference in South Africa. His wife, Adria, is a physician in private practice. 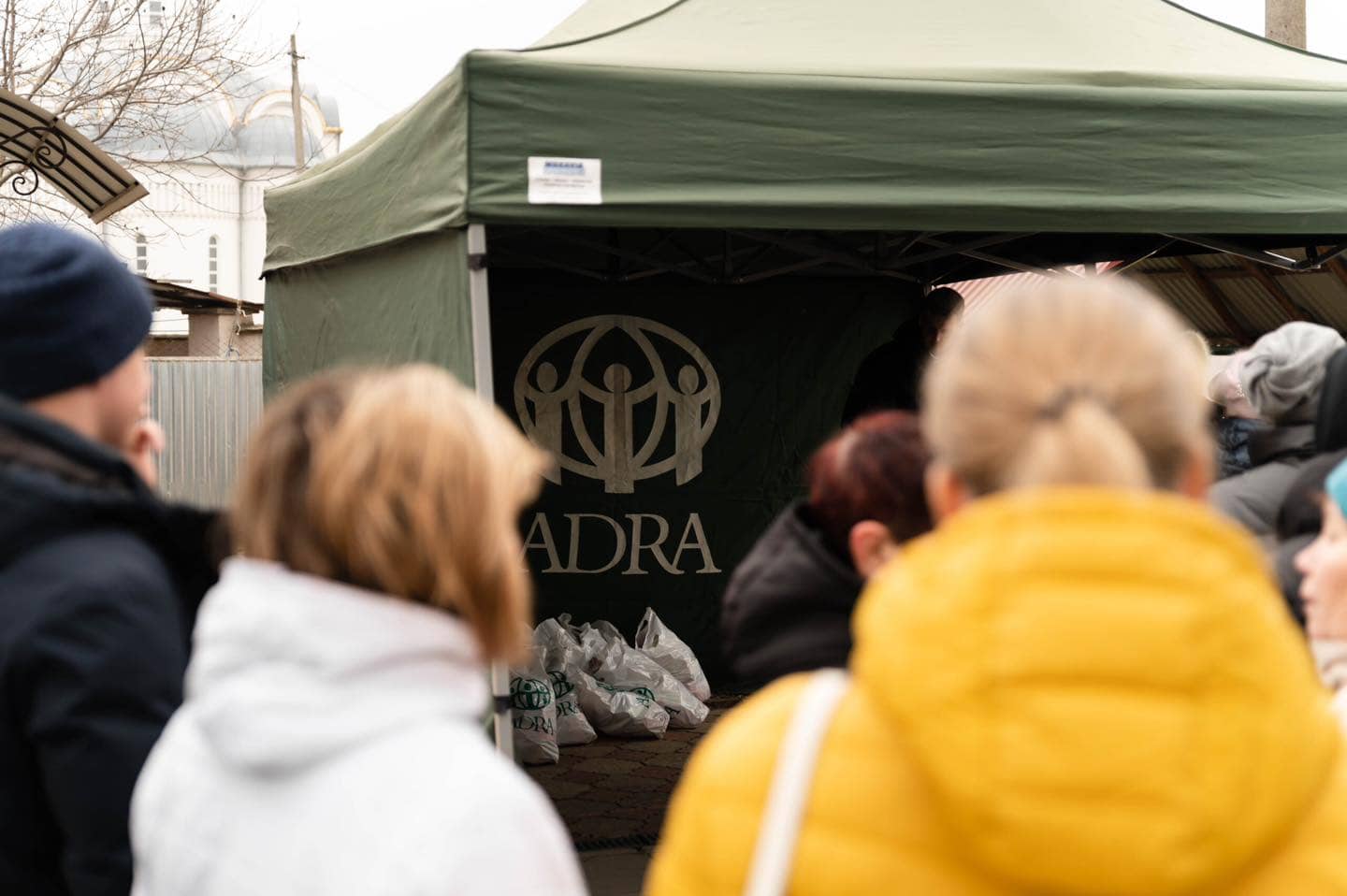