t was Christmas Eve, and the first of fourteen thousand townspeople began streaming through the building's huge double doors. A beam of light shone down from above, as though from heaven itself, highlighting an elaborate Nativity scene. Marble angels gazed down upon the largest pipe organ in the world. As people settled into their seats, the organist struck a chord and led the crowd in singing the first hymn: "O Come, All Ye Faithful."
Does this sound like a Christmas Eve service at a 1990s' megachurch? If you said "yes," you guessed wrong. This spectacular Christmas celebration took place, not in a church at all, but in a department store. It was an annual attraction that drew shoppers to the leading Philadelphia department store, Wanamaker's, from the 1910s to the 1950s. And it illustrates how America's Christmas consumerism has some of its roots, ironically, in our own Protestant tradition.

As strange as it may seem today, Christmas was not always treated as a holiday in America. In the seventeenth and eighteenth centuries, few Americans really celebrated Christmas. Influenced by their Puritan heritage, Congregationalists, Presbyterians, Baptists, and Methodists viewed Christmas Day with suspicion, regarding it as a Roman Catholic invention with dubious origins. The emphasis on the Nativity, they believed, grew out of devotion to Mary.
For example, in 1659 the Massachusetts General Court outlawed the celebration of Christmas. In the 1770s a Presbyterian teacher described Christmas as being "like other Days, in every Way calm & temperate. People go about their daily business with the same Readiness." Even as late as the 1880s Methodists insisted that Christmas was simply a day of family reunions and good works. "We attach no holy significance to the day," a Methodist publication boasted.
Protestant reluctance to celebrate Christmas had one major side effect. In his book Consumer Rites, Princeton professor Leigh Eric Schmidt writes that keeping Christmas off the Church calendar helped pave the way for its inclusion in the secular calendar. While clergy downplayed Christmas, businessmen and department store magnates like John Wanamaker stepped in where angels feared to tread, fostering the celebration of Christmas in the marketplace instead of the church. As Schmidt put it, Christmas became "one more market day, a profane time of work and trade." 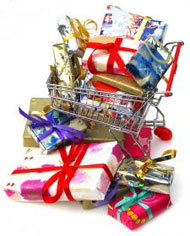 For some of us, this is shocking news. Could the roots of Christmas consumerism be in our own tradition? Well, history suggests that Christmas became such a commercialized holiday, in part, because Protestants did not make it a holy day.
Of course, the celebration of Christmas in the marketplace is not all-bad. Many of us delight in shopping in stores decked with boughs of holly while listening to Yuletide carols as we select gifts for our friends and families.
So if we're partly responsible, let's make up for it. Instead of just griping about the commercialization of Christmas, let's do something about it. Let's make up for our past errors by filling our churches this Christmas.

If we present to the world a worshipping community, they'll be drawn to the real thing—not a manufactured substitute. If our candle-lit Churches and Cathedrals are full of Christians living in real harmony and love, then nothing in those glittering shopping malls can possibly compare.

Because there, in the community of faith, we can fully grasp the significance of our Savior's birth. And nothing gives us more cause for joyous celebration than that.

________________
Chuck Colson is chairman and founder of Prison Fellowship in Lansdowne, Virginia. This article is

reprinted from BreakPoint, December 21, 1999, used with permission of Prison Fellowship.