ou’re going to die,” the emergency center doctor said. “There’s nothing we can do for you, so you probably should get your life in order.”

His years as a heroin user had left Bob Page with a case of hepatitis C that precipitated liver failure. As he listened to the grim pronouncement, it seemed that the end was near.
A Path of Pain
Bob was only 9 years old when he began using drugs. What started as glue-sniffing moved quickly into alcohol abuse. At 17, when he ran away from home to escape from problems there, he was introduced to other street drugs.
At 18 Bob joined the Marine Corps, hoping to clean up his life. But old habits followed him, and he soon found himself discharged and serving a year in prison after being convicted of burglary.
Upon his release from prison, Bob moved in with an uncle and tried again to find a better path. Once again, he became involved with other drug users who introduced him to heroin. That’s when he contracted hepatitis C. 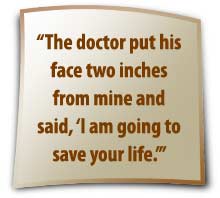 Observing that many of his friends were dying from heroin use, Bob and his wife made another attempt to leave the life of drugs behind them by moving to Colorado, away from their drug sources.
But as the years passed, concerns about having enough money to retire led Bob to leave his job as a heavy equipment operator for a new line of work: growing marijuana. Soon he had a profitable business and was transporting his product to Washington, D.C. Business flourished, and what began as a small, growing operation was now netting him and his wife a profitable income while serving as their own consistent source of drugs.
Despite the financial rewards, Bob’s life was unraveling. His relationship with his wife was strained. Brushes with the law had resulted in more jail time. The diagnosis of hepatitis C now brought him face-to-face with his own mortality.
Finding Hope
Bob’s condition was deteriorating rapidly. He had trouble concentrating and speaking. At times he became combative and wouldn’t take his medications, making his condition worse.
Desperate, he headed to his grown son’s house one day. Assessing his father’s dire condition, his son insisted on taking Bob to the emergency room in the hope of finding someone who could help. But in place of finding hope, they heard the ER doctor’s fateful, bleak prognosis: You’re going to die.
Yet God had another plan for Bob’s life.
“Since I was in the final stages of liver disease, they admitted me to the hospital. My brain function was gone. When my own physician came to see me, he asked to have me transferred to Porter Adventist Hospital, so I could  be put on the waiting list for a liver transplant.”
At 57 and in dire straits, Bob agreed to the transfer to Porter, knowing he had few options left. There he met with a surgeon who offered him a different message. “He put his face two inches from mine and said, ‘I want you to understand that I am going to save your life, so get yourself in as good a shape as you can.’”
“I started spending lots of time reading about the hospital and about Adventists, and I was impressed with their three-part approach to healing—focusing on the spiritual, mental, and physical,” says Bob. “The people there were very kind.”
As he waited for a liver match, Bob decided to pray—something he hadn’t done for many years. He was concerned about his wife, who was mentally ill, and what would become of her if he died. “Lord,” he prayed, “I need to know how to care for her. If I die, she has no one. I am abandoning her.” His answer came within hours, when the hospital called to say they had located a liver donor.
“I know I must have driven everyone crazy because for three days after the transplant surgery I sang ‘Amazing Grace.’ I just felt so alive,” he says. “I could feel the energy going through my body giving me back everything I had lost.”
Bob’s three-week hospital stint gave him time to think about his future. The hospital chaplain suggested he attend meetings of Alcoholics Anonymous.
One night he awoke in the middle of the night, unable to sleep. He came upon a television program that featured a reenactment of Christ’s crucifixion. “For the first time, I had an understanding of the love Christ had for me. I saw that there was a reason I was alive—it wasn’t just a fluke. At that moment my life changed.”
A New Beginning
With a new lease on life, Bob decided to find a church. Although he had occasionally attended church as a child, he hadn’t been part of a church family for 25 years. He decided to find the nearest Seventh-day Adventist church. To his surprise, he  was met at the door by the pastor, himself a recovering addict who had been “clean” for 21 years. He immediately felt a sense of camaraderie, and on the day before Christmas Bob was baptized into Christ.
Today Bob is a driving force in the Denver Narcotics Anonymous program, a deacon at his local church, and active in his own Bible study. Because of his own journey, he’s now helping his church set up a program to support those who are struggling with drugs.
“I’m not a preacher, but I’m here to plant seeds,” says Bob. “When people see my serenity and ask how I have gotten to this place, I tell them it’s because I know Christ is beside me. He’s my strength, my courage.”
To Bob, “Savior” is a personal word. “I see the rest of my life being spent in service to humankind. At the end of my life I want it to be said that I loved people as Christ loved me. But you have to surrender yourself and read the Bible on a daily basis. You’re not capable of doing this on your own.”
_______
Delona Lang Bell is president of CMBell Company, a corporate marketing and communications firm in Walla Walla, Washington.
Advertisement
Advertisement