A Tree Grows in Australia

he beginnings of the great island continent now known as Australia are shrouded in mystery. Indigenous inhabitants, supposed to have occupied the land for thousands of years, refer to it as the “dreamtime.”

European explorers, believing  there was a large landmass somewhere in the antipodes, ventured into the unknown. Dutch navigators established settlements in the East Indies. Some ships traversing the Indian Ocean were blown off course, and in some cases wrecked on the barren shores of a land they eventually named “New Holland”—though, seeing no economic value in it, they didn’t attempt to settle it.
English captain James Cook is traditionally credited with discovering the eastern shores of Australia in 1770, claiming it for Great Britain and naming it New South Wales. However, Spanish ships and navigators had crossed the Pacific Ocean, discovered the Solomon Islands and others, and sailed through Torres Strait as early as 1600. Rock inscriptions near Sydney indicate that Spanish vessels had landed on Terra Australis, and Australia was regarded as a Spanish possession for nearly 300 years.
When, as a result of the American War of Independence, Britain could no longer deport her convicts to the United States, they were deported to penal colonies in the newly discovered land “down under.” The “First Fleet” arrived in 1788, Governor Phillip took possession for His Majesty on January 26, and the first convict settlement was established at Port Jackson, now Sydney Harbour. Other penal settlements included the notorious settlement at Port Arthur, Tasmania.
In England a company was formed with the idea of establishing a convict-free colony in South Australia. On December 28, 1836, the new colony was proclaimed at Holdfast Bay, now Glenelg. Slowly the settlement struggled to its feet as more free settlers arrived, including Protestant Germans fleeing religious persecution in their native land. Advertisements appeared “back home” offering free passage to agricultural laborers, shepherds, carpenters, blacksmiths, and stone masons willing to immigrate to the new colony of South Australia.
The First Adventists
Walter Were was the son of a Bristol tailor. His forebears had been “landed gentry” and owned woolen mills in England’s West Country, but fortune had not smiled on him. A stonemason by trade, Walter married Selina Jenkins in St. Clements Anglican Church, so the family was at least nominally Anglican. In 1879 he and his wife, three sons, and five daughters packed up and took the train to Plymouth, where they embarked on the sailing ship Devon, bound for Port Adelaide in South Australia. 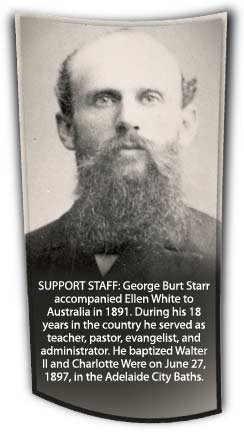 After a voyage of 105 days the 10 of them disembarked on March 4, 1880, and found lodgings in Bowden, an area not unlike the one they left in Bristol.
Walter and his 14-year-old son, Walter II, found employment in the building trade. South Australia’s Mediterranean climate was not blessed with a lot of merchantable timber, so many homes were built of stone and locally made bricks. Walter’s younger sons also became artisans in the building trade. They built homes in Prospect, a northern suburb of Adelaide.
Walter Were II married Charlotte Cassidy, daughter of another builder, and started his own family. He joined the Salvation Army and became a bandsman in the North Adelaide Corps.
In June 1885 a band of Seventh-day Adventist missionaries landed in Sydney, New South Wales. They began their evangelistic work in Melbourne, capital of the state of Victoria. With limited funds and high rents, most of their outreach consisted of distributing printed tracts. Within a few weeks they had distributed more than 20,000 tracts, had persuaded five people to join the church, and had begun having Bible studies in the homes of interested individuals.
After establishing a fledgling church in North Fitzroy, and another in the gold mining town of Bathurst, J. O. Corliss and an assistant, William Hamilton, a convert of the Melbourne campaign, sailed for Adelaide, arriving after a stormy voyage on August 27, 1886. By the end of the year the first Seventh-day Adventist church in South Australia had been organized with 27 members.
Charles Davey, a convert from Wesleyan Methodism, was elected elder of this new company. Later Davey moved to the Prospect area, built a home for his family, and began witnessing about his faith. One day he called at the home of Salvationist Walter Were II with a copy of the Bible Echo. Bible studies followed, and Walter and his wife were baptized in the Adelaide City Baths by G. B. Starr on June 27, 1897.
It wasn’t easy being a Seventh-day Adventist in Australia in those early days. Religious prejudice between Protestants and Catholics was pronounced and demonstrative. Seventh-day Adventists were opposed by both sides and condemned as a “sect.”
Walter set up the Busy Bee Joinery Works in a western suburb of Adelaide, building many homes in that area, all the while actively engaged in the work of his church. In 1905 he, Davey, and other members built a wood and iron church on Ballville Street in Prospect. In 1906 the first Adventist school in Adelaide opened there in one of the rooms of the church. Its teacher, Nellie Blunden, taught 15 pupils. Walter Were III, 17 years old at the time, was baptized that same year by Alfred Semmens. Through the ensuing years, including World War I, Walter II and his son built homes and actively supported their church.
The Family Connection
Walter II’s sister Flora joined the Adventist faith. Her daughter, Myra, married Albert Speck, a schoolteacher who served as registrar of Avondale College; principal of Carmel College, Western Australia; then as Avondale College principal.
Walter’s brother Albert, fiercely loyal to his British heritage, was bitterly opposed to the Adventist faith, and angry when two of his sons, Albert and Louis, instead of fighting for king and country during World War I, went to Avondale College to study for the ministry.
Albert served as a pastor in Queensland and New Zealand before ill health forced him to return to Australia, where he worked for the Sanitarium Health Food Company in Cooranbong, New South Wales. His daughter Melva married David Judd, and supported his ministry. Daughter Daphne served at Avondale College. Son Louis became a successful pastor/evangelist.
While running a mission in Geelong in Victoria, Albert’s son, Louis, won his aunt Rosina and her family to the Adventist faith. Some of those who have made a significant contribution to the Seventh-day Adventist Church and its work are George Gilbert, printer with Signs Publishing Company; and Jack and Lily Cole and their sons—Harry, Sanitarium Health Food manager; Sidney, research scientist with Sanitarium Health Food; and Robert, Adventist school principal. Glenn Roberts, a cousin, became a pastor and youth director, and served at Avondale College. 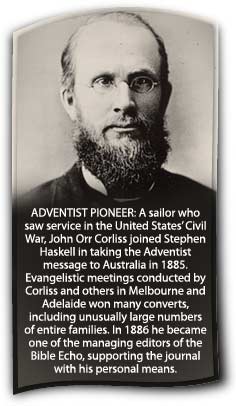 Emma Were, another of Walter II’s sisters, married George Palmer, who with two of his sons worked as contractors, the traditional Were occupation. One daughter, Nellie, married Ernest Krause, a bricklayer. Their two sons, Ernest and Milton, devoted their lives to the pastoral/educational work of the church. Their children have followed in the same tradition. Gary Krause is a general field secretary at the General Conference, working in the Office of Adventist Mission.
Walter Were III started his own contractor business, building and selling many residential homes during the boom years of the twenties. Whenever possible he employed Adventist tradesmen, including a Swedish sailor named Joel Johnsson, father of former Adventist Review editor William Johnsson.
After the Great Depression, Walter III built two churches, a two-story conference office and youth hall, and a four-room school building for the conference. He and his wife, Ida, raised a family of seven sons and one daughter. After being a lifelong member of the Prospect church (which he built), he died in the Lord at the age of 93.
Eric Were, one of a set of twins born to Walter and Ida, demonstrated natural artistic ability from an early age. As an artist, photographer, and film producer, his film Cry of New Guinea profiled missionary Len Barnard and his work among primitive indigenous tribes. Eric subsequently produced many documentary and promotional films for several divisions of the Seventh-day Adventist Church. He also wrote two books: Perilous Paradise, a photo story of New Guinea and its emerging people; and No Devil Strings, a biography of Solomon Island chief Kata Rangoso. His photographic and writing skills were part of the book Of Pioneers and Progress, a history of the Seventh-day Adventist Church in South Australia (1886-1986).
Cyril, the other twin, became a builder/Bible worker/singing evangelist in the Queensland Conference, college dean and teacher at Carmel College, and teacher in the South Australian Education Department.
Their sister, Shirley, worked in the Adelaide office of the Sanitarium Health Food Company, trained as a secretary at Avondale College, and became office assistant to the West Australian Conference president.
Their youngest brother, Stanley, gave a lifetime of service to the church in Australia and the Sanitarium Health Food Company as a structural engineer and videographer.
Walter and Selina Were could never have imagined the lives they were creating for themselves and their children when they boarded the Devon for their voyage “down under.” But God’s providence led to the intersection of a family and a message, which developed into faith and action that have touched thousands of lives around the world.
The prescription today is the same as it was back then: a desire to improve one’s lot, combined with being open to God’s leading. Who knows where it will take you?